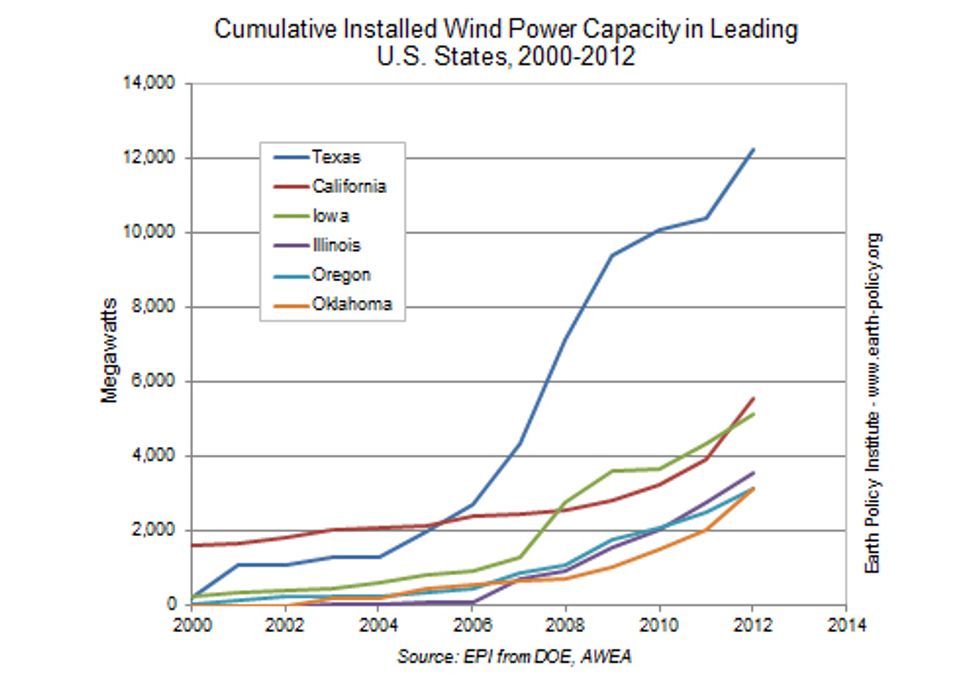 Defying conventional wisdom about the limits of wind power, in 2012 both Iowa and South Dakota generated close to one quarter of their electricity from wind farms. Wind power accounted for at least 10 percent of electricity generation in seven other states. Across the U.S., wind power continues to strengthen its case as a serious energy source.

The U.S. now has 60,000 megawatts of wind online, enough to meet the electricity needs of more than 14 million homes. A record 13,000 megawatts of wind generating capacity was added to the country’s energy portfolio in 2012, more than any other electricity-generating technology. Wind developers installed close to two thirds of the new wind capacity in the final quarter of the year. Nearly 60 wind projects, totaling more than 5,000 megawatts, came online in December alone as developers scrambled to complete construction by the end of the year to qualify for the federal wind production tax credit (PTC) that was scheduled to expire.

Texas, the U.S. leader in overall wind development, saw its wind power capacity grow to 12,200 megawatts in 2012, an increase of 18 percent over 2011. The Electric Reliability Council of Texas, the grid manager for 23 million customers in the state, reports that wind farms generated over 9 percent of the electricity it delivered in 2012. Only four countries outside the U.S. have more installed wind capacity than the state of Texas.

California added more than 1,600 megawatts of wind in 2012 to reach 5,500 megawatts, overtaking Iowa for the country’s second highest overall wind capacity. State law requires utilities in California to get one third of the electricity they sell from renewable sources by 2020. Similar requirements have been adopted in each of the other top 10 states in installed wind capacity except for Oklahoma. But that state may have already exceeded its non-binding 2015 goal of 15 percent renewable electricity.

At the national level, wind farms generated 3.5 percent of U.S. electricity in 2012, up from 2.9 percent the year before. Compared with conventional sources, this is still a small share. But wind generation has quadrupled since 2007, growing by more than 30 percent per year. Among the five leading sources of electricity in the U.S., none comes close to matching wind’s recent rate of growth. In fact, generation from nuclear and coal plants is declining at 1 percent and 5.5 percent per year, respectively. The Sierra Club’s Beyond Coal campaign reports that more than 140 of the roughly 500 U.S. coal-fired power plants are slated to retire, indicating even greater drops to come in coal-derived electricity.

As part of the broader federal budget deal in early January 2013 to avert the “fiscal cliff,” the wind PTC was extended for one year and modified to allow projects that begin construction by the end of 2013 to qualify. Unfortunately, wind turbine manufacturers had seen new orders plummet in anticipation of the credit’s expiration, making it likely that new wind capacity additions in the U.S. in 2013 will be much less impressive than 2012—perhaps 2,000 to 3,000 megawatts. Actual wind electricity generation, on the other hand, should see a substantial boost as the wind farms completed in late 2012 spend their first full year in operation.

According to Windpower Monthly, analysts expect installations to rebound to between 5,000 and 8,000 megawatts in 2014. Looking beyond the next year or two, a coherent, long-term national energy policy—one that levels the playing field for renewables relative to conventional sources—is needed to finally leave behind the boom-bust cycle of wind development and begin to take full advantage of this vast resource.