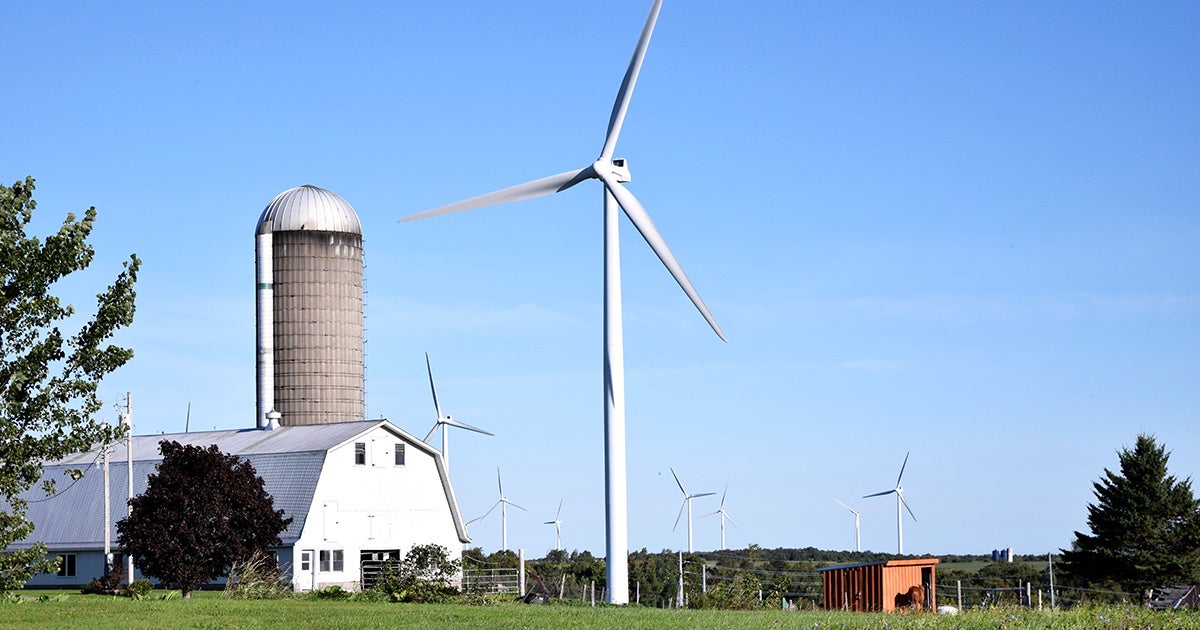 Fresh off the first-ever American Wind Week, the Department of Energy (DOE) National Renewable Energy Laboratory (NREL) released a new report finding wind energy cost reductions of 50 percent are possible by 2030. That’s on top of the 66 percent cost reduction since 2009.

Envisioning the wind plant of the near-future—a “collection of intelligent and innovative machines operating in a highly coordinated way”—NREL expects advancements in wind turbine design, materials and controls to unlock major performance improvements and cost reductions.

Advanced turbines will produce significantly more electricity, allowing wind to provide the lowest-cost form of electricity in many states and regions, without any policy incentives. NREL’s findings demonstrate how the federal wind Production Tax Credit (PTC) is successfully driving economies of scale and efficiency improvements, and address concerns that wind power deployment will drop as the PTC phases down.

Prior to NREL’s report, the most recent evidence foreshadowing further wind power cost reduction came from a 2016 study funded by the DOE. Surveying experts around the world, that study found anticipated cost reductions ranged from 24 to 30 percent by 2030. Under more aggressive circumstances, experts predicted cost reductions as high as 40 percent as research and development programs and technology learning lead to additional efficiencies, as shown below. 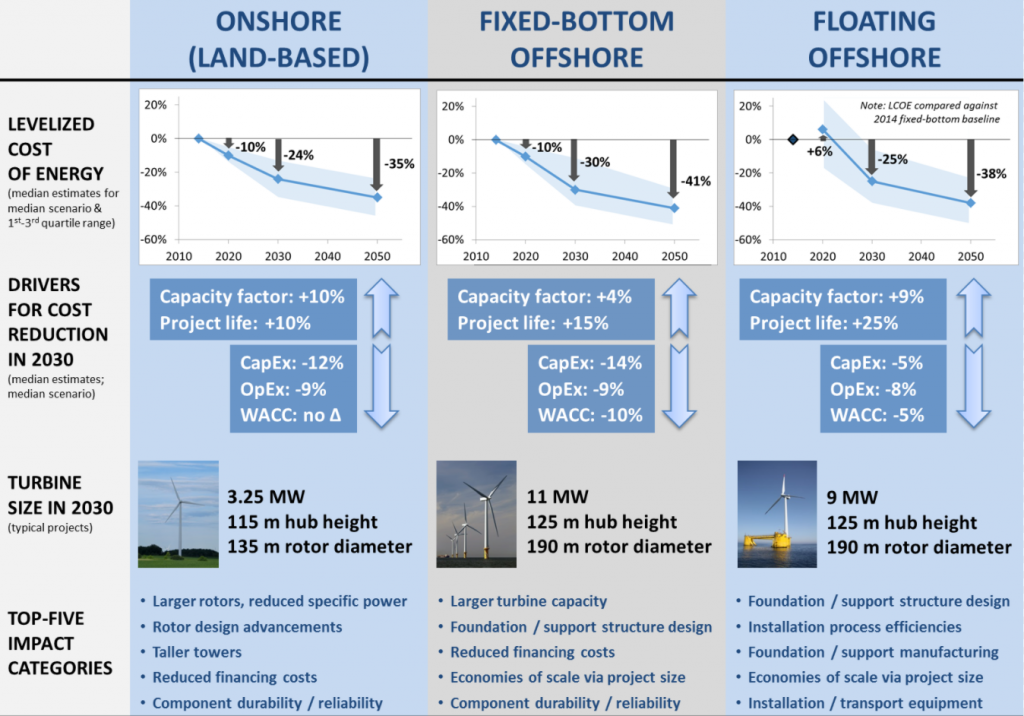 Building on these projections, NREL predicts a “SMART” wind plant of the future will be able to achieve even further cost reductions—up to 50 percent by 2030. The wind turbine of the future will be much larger, sit atop a taller tower, use next generation blades, and incorporate intelligent controls and remote monitors. Towers reaching 135 meters will access more consistent wind resources, while next-generation blades stretching more than 70 meters will help the wind turbine capture more of that resource as efficiently as possible. This will enable capacity factors more than 50 percent, all while the installed cost per kilowatt falls and plant life expectancy grows.

On an unsubsidized basis, these improvements and cost reductions will drive the levelized cost of wind energy from roughly $55/megawatt hour (MWh) in 2015 to $31/MWh in 2030.

Improvements in wind project financing structures will enable further cost reductions. Shifting away from equity to debt and using innovative financing mechanisms like yieldcos will reduce financing costs and the bottom-line cost of wind energy.

Recognizing this eventual shift to higher debt-to-equity rations, NREL estimates that the cheaper capital stack will unlock a further $8/MWh reduction in wind energy costs (falling from $31/MWh to $23/MWh on an unsubsidized basis) by 2030, as indicated below. 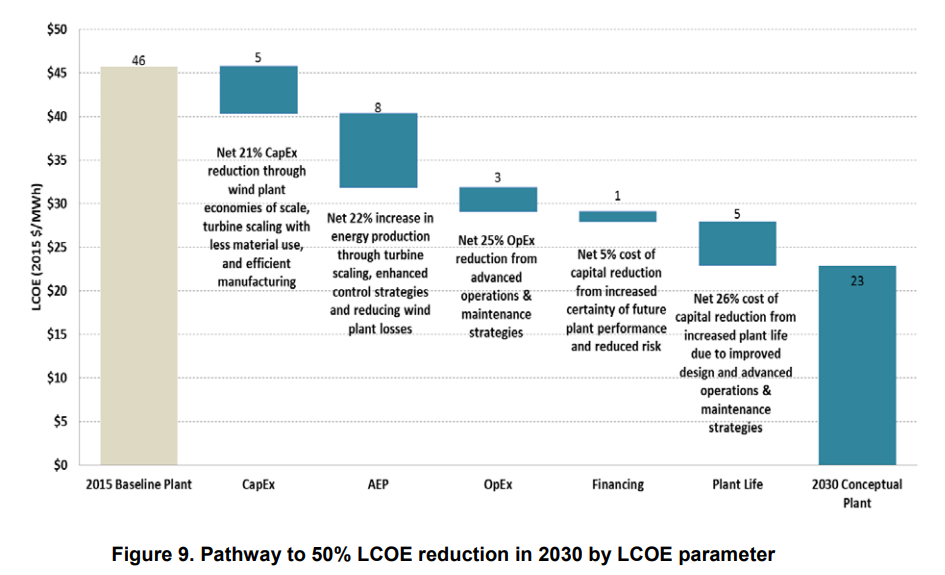 Comparison to Other Findings

A number of presentations and market analyses this year confirm that the cost reductions NREL projects are achievable—and, in a few cases, too conservative.

Let’s begin with the Goldman Sachs Group Inc. In a recent report, the investment bank concludes that “the U.S. power sector already appears in the early stages of a technological mix revolution given a combination of political, technological and now social tailwinds driving improved economics and demand for renewables.” Goldman predicts new wind and solar capacity of more than 200 gigawatts (GW) by 2030, primarily driven by economics.

Confirming the economic tailwinds for wind energy, Pattern Energy CEO Mike Garland forecasts wind energy prices will settle between $30-$40/MWh as the PTC phases out and into the long term. The company is already seeing significant improvements in energy production and cost for wind projects the company is bidding for delivery post-2020.

Most tellingly, NextEra Energy Resources anticipates even more aggressive wind cost reductions. The largest owner of wind power capacity in the U.S. expects wind power to be the lowest cost energy resource in the post-2020 period on an unsubsidized basis, ranging from $20-$30/MWh. 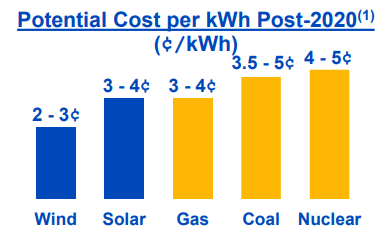 This aggressive cost trajectory is consistent with the industry’s history of beating even the most aggressive cost projections. In 2008, DOE predicted (page 148, converted to 2016 dollars) that the U.S. wind industry could reduce wind costs to $1,850/kW by 2030. By 2016, the industry had already beaten that projection and driven costs down to $1,587/kW. That 2008 DOE study also estimated that the best wind sites could reach capacity factors of 36 percent by 2015 and 38 percent by 2030. Wind projects installed in 2014 and 2015 have an average capacity factor of 42.6 percent, beating DOE’s 2030 target by a wide margin 15 years early.

Progress towards the wind power plant of the future is predicted to unlock substantial additional cost reductions. In 2030, NREL expects unsubsidized LCOEs to range from $19/MWh to $32/MWh, with the central expectation at $23/MWh. At these cost levels, wind energy will be competitive with all other energy sources across much of the U.S., providing a win-win for consumers and public health.