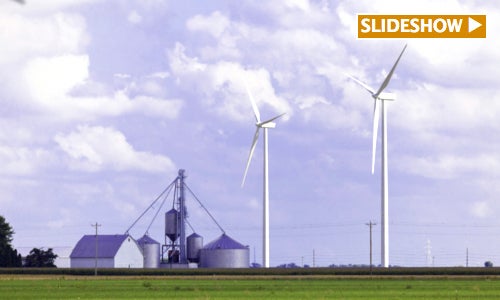 Ohio’s efforts to advance renewable energy faced opposition from state senators in 2013, but this month wind energy provided a clear example of its benefits.

Iberdrola Renewables presented $2.7 million worth of checks to two Ohio communities Friday to commemorate the first of the annual payments in lieu of taxes (PILOT ) for the Blue Creek Wind Farm—the state’s largest wind farm with 304 megawatts (MW) of output.

“This is proof that state policies are doing what they were intended to do: Generating tremendous local economic development as well as clean energy,” State Sen. Cliff Hite (R-Findlay) said.

Blue Creek is spread across two counties and six townships in Northwest Ohio. The $2.07 million check presented to Van Wert County makes the farm the county’s largest taxpayer, equal to the combined amount of the top 11 taxpayers as of 2012. Paulding County received $666,000, or about $18,000 for each of its 37 turbines.

The six townships each get an average of $1,400 per year per turbine, according to Iberdrola.

“These funds support projects and services that benefit everyone across the region, from schools, public safety and public health programs, to road repairs,” said State Rep. Tony Burkley (R-Payne). “It’s great to see this kind of investment in Northwest Ohio, and it’s better to see the benefits have such a positive impact on the people who live and work here.”

Most of the revenue will be shared with school districts, according to Iberdola. For example, Crestview Schools will receive about $850,000 per year in new revenue. It has 81 turbines within its boundaries and stands to gain a revenue boost of about 10 percent.

“This is my 40th year in education and I don’t think I have ever seen a source of revenue like this offer itself to a school district like this,” Crestview Superintendent Mike Estes said.

“It’s really a windfall for us.”

The $600 million wind farm was the largest private investment in Ohio in 2011, according to the company. It became operational in June 2012 and generates enough electricity to power 76,000 average Ohio homes each year.