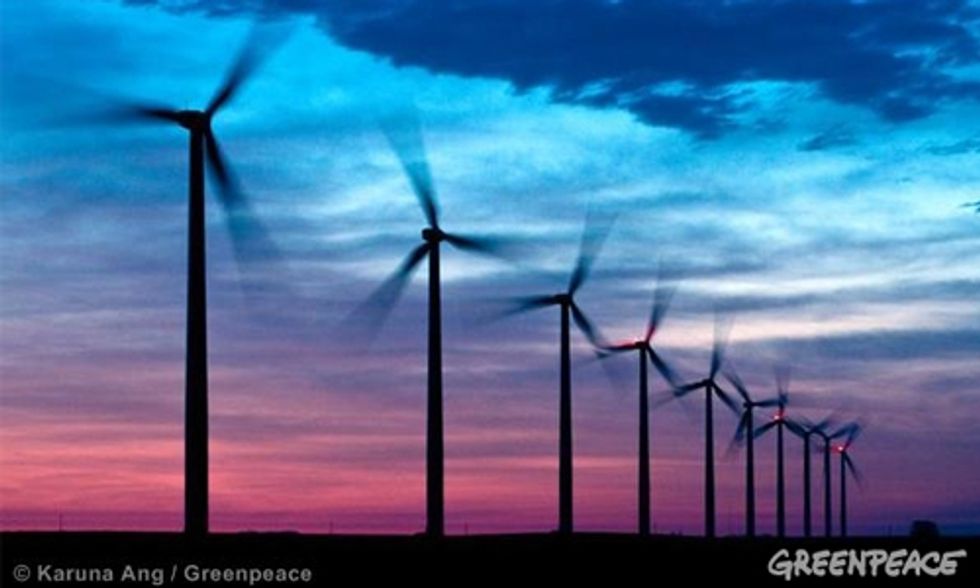 Wind power has a pivotal role to play in the world's energy supply over the next few years. By providing huge amounts of clean, affordable power, it can buy us time in the fight against global warming while revolutions in energy efficiency and solar power gain momentum.

Wind power could be supplying up to 19 percent of the world's electricity and avoiding over three billion tonnes of CO2 a year by 2030. By 2050, 25-30 percent of global power could come from harnessing the wind. Photo credit: Karuna Ang / Greenpeace

Greenpeace and the Global Wind Energy Council have just released a two-yearly status report on wind energy and its prospects up to 2050.

In as little as five years' time wind power could prevent more than a billion tons of carbon dioxide (CO2) from being emitted each year by dirty energy. That's equivalent to Germany's and Italy's emissions combined, or Africa's total CO2 emissions, or those of Japan, or two-thirds of what India pumps out.

Ten years after that, wind power could be supplying up to 19 percent of the world's electricity and avoiding more than three billion tons of CO2 a year. By 2050, 25-30 percent of global power could come from harnessing the wind.

The wind industry has grown at around 26 percent per year over the past 18 years. Europe and China have been solid wind markets for over a decade.

Now the U.S. is on the way to gaining a 20 percent share of the world market. In the coming five years, the rapidly developing economies of Brazil, South Africa and India are likely to be among the next to reap the benefits of wind power.

The main reason for this is that wind power has become the least-cost option for adding new power capacity to the grid in an increasing number of markets. Prices are continuing to fall and smart investors are seizing on the potential. During each of the past four years, an average of €50 billion went into new wind power equipment. This could increase to €104 billion by 2020 and €141 billion by 2030, according to the status report.

There is also good news for jobs. Around 600,000 people currently work in the wind power industry. That figure could rise to around 1.5 million by 2020 and exceed 2 million jobs by 2030.

But what also makes wind power attractive is its 'scalability' and the speed that power can be brought on line. That's particularly important where people have no access to electricity. Contrast that with huge and highly controversial coal-fired or nuclear power plants that involve years of debate and construction.

(By the way, forget the claim by sceptics that more energy is used in manufacturing wind turbines than they supply. A wind turbine 'pays back' all of the carbon dioxide emissions from its manufacturing, installation, servicing and decommissioning in its first three to nine months of operation. That means pollution-free power for the rest of its 20-year design lifetime).

Why all this is important is because the power sector pumps out more than 40 percent of all CO2 emissions from burning fossil fuels.

Wind power is an ideal technology to achieve early reductions in carbon pollution and to keep the window open to avoid global warming crossing the 2°C 'danger' threshold. But time is short for meeting climate protection targets and ensuring that global emissions peak and decline during this decade.

Capturing all of the future opportunities for wind power will once again depend on convincing recalcitrant policymakers and overcoming the vested interests of the fossil fuel lobby.

Sven Teske is a senior energy expert with Greenpeace International. Since 2005 he has been the project leader for the global energy scenario Energy [R]evolution: A Sustainable World Energy Outlook.