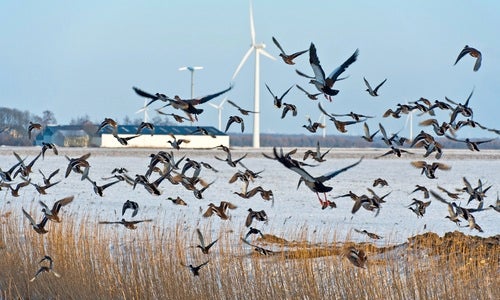 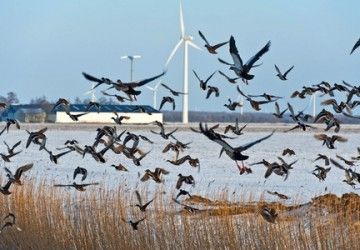 For the first time, a wind energy company has faced prosecution for the death of birds.

The U.S. Department of Justice (DOJ) and Duke Energy announced a $1 million settlement Friday related to the deaths of more than 160 protected birds in Wyoming.

The charges stem from the discovery of 14 golden eagles and 149 hawks, blackbirds, larks, wrens and sparrows from 2009 to 2013 that bird advocacy organizations believe were caused by two Duke projects in Converse County with a combined 176 wind turbines. The $1 million settlement covers fines and mitigation costs and will be dispersed to the North American Wetlands Conservation Fund, Wyoming Game & Fish Department, National Fish and Wildlife Foundation and the Conservation Fund.

“Wind energy is not green if it is killing hundreds of thousands of birds,” said  Dr. George Fenwick, president of American Bird Conservancy (ABC). “We are pro-wind and pro-alternative energy, but development needs to be bird-smart. The unfortunate reality is that the flagrant violations of the law seen in this case are widespread.”

ABC says Duke violated the Migratory Bird Treaty and the Bald and Golden Eagle Protection acts. The organization says it made multiple requests to Congress and officials of both the U.S. Fish and Wildlife Service (FWS) and DOJ over the years.

ABC’s statement attempts to show a less-publicized side of energy and the lives it can claim. The organization said data from ornithologist Dr. Shawn Smallwood estimated that the wind energy was killing nearly 600,000 birds per year, which was up from 440,000 in 2009.

Groups like ABC aren’t advocating for fossil fuels, but they are concerned about bird deaths piling up as the wind energy industry expands. The U.S. Department of Energy said in 2010 that it wanted to expand the industry by 12 times.

“Killing half a million birds by today’s wind industry is a significant figure, but how many more will be killed when the country has fully built out a program 12 times larger that operates without strong siting and operating guidelines,” Dr. Michael Hutchins, coordinator of ABC’s National Bird Smart Wind Energy campaign, asked in ABC’s statement. “The wind industry should be treated like other for-profit energy industries. We believe it’s necessary to enforce development restrictions on wind, such as avoiding bird migration corridors and places where protected species and sensitive habitats are present.”

Duke expressed remorse in its announcement of the settlement.

“Our goal is to provide the benefits of wind energy in the most environmentally responsible way possible,” said Greg Wolf, president of Duke Energy Renewables. “We deeply regret the impacts to golden eagles at two of our wind facilities. We have always self reported all incidents, and from the time we discovered the first fatality, we’ve been working closely with the Fish and Wildlife Service to take proactive steps to correct the problem.”

Duke also said it has taken steps to prevent future deaths, including the installation and testing of new radar technology to detect airborne eagles on or near project sites and curtailing turbines during periods of high eagle activity.

ABC called the settlement the first and only “line in the sand” created for wind energy providers to protect birds. Meanwhile, the American Wind Energy Association (AWEA) wrote a statement that defended its industry, while admitting to the stark reality of bird fatalities.

“No form of energy generation, or human activity for that matter, is completely free of impacts and wind energy is no exception,” AWEA wrote.

“At the end of the day, no one takes the issue of wildlife impacts more seriously than the wind industry, and the industry does more to study, monitor and mitigate for the impacts associated with project development and operation than any other energy sector.”