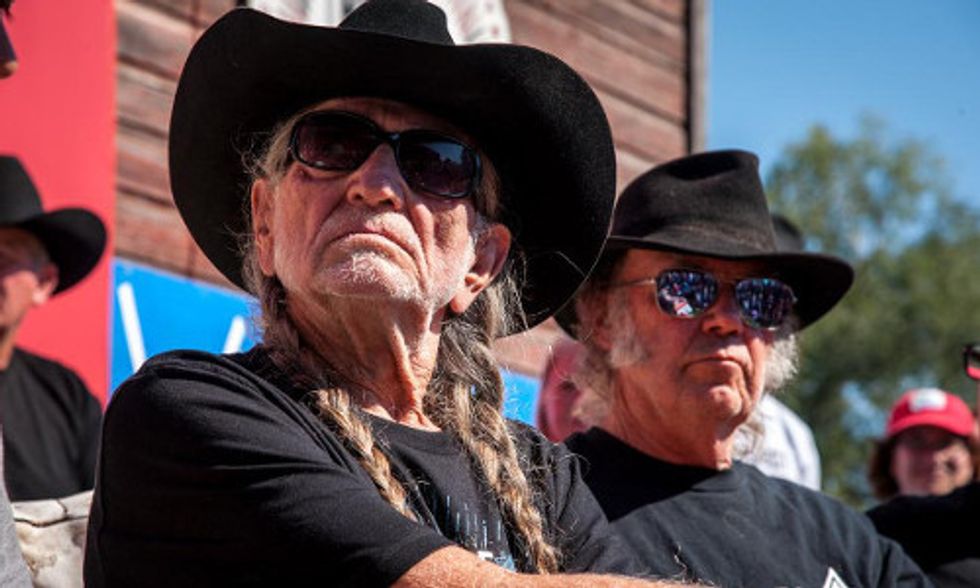 Willie Nelson and Neil Young, whose Farm Aid concerts have been raising money for family farmers since 1985, demonstrated their support for the agricultural heartland in another way this weekend, headlining the Harvest the Hope: A Concert to Protect the Heartland. The sold-out event, hosted by Art and Helen Tanderup at their farm in Neligh in northeast Nebraska, was intended to call attention to the destruction the Keystone XL pipeline would wreak on farms like theirs as well as nearby tribal lands.

Willie Nelson and Neil Young were honored by the Rosebud, Oglala, Ponca and Omaha Nations for their dedication to family farmers, ranchers and native families. Photo credit: Michael Friberg

Nelson and Young played separate sets for the crowd of 8,000, joining together to sing the Woody Guthrie anthem "This Land Is Your Land," to which they added some lyrics about the pipeline. Lakota hip hop artist Frank Waln, Lukas Nelson and sons of the Real with special guest Micah Nelson (Lukas and Micah are Willie Nelson's son) and the Stopping the Pipeline Rocks All-Stars, a group of local Nebraska musicians, warmed up the crowd with opening sets.

In addition to the headlining acts, the event featured music, dance and storytelling performances from area tribes and pipeline fighters, a tipi encampment, a kids area and booths hosted by local community groups and candidates active in the fight against the pipeline.

"The day’s events brought together leaders from several of the seven bands of the Great Sioux Nation in South Dakota and the Ponca Nation of Oklahoma," reported the Omaha World-Herald. "The proposed path of the pipeline crosses historical tribal lands in South Dakota as well as the Ponca Trail of Tears in Nebraska, the path the Ponca people following during their forced march to Oklahoma’s Indian Territory."

Nelson and Young speak out about the impact of the pipeline on the environment. Photo credit: J Grace Young for Bold Nebraska

The paper also wrote that at the pre-concert press conference, Young tied the pipeline opposition to the choice between fossil fuels and clean energy and its impact on climate change.

“America has a chance to stand up and lead the world like we used to," said Young. “So we’re not just standing here complaining about problems, but finding solutions.”

Young has just released a new song "Stand Up and Fight," a potential anthem for the climate movement, which follows the title lyric with the words "and save the Earth."

The proceeds from the concert will go to Bold Nebraska, the Indigenous Peoples Network, the Cowboy & Indian Alliance. and local community clean energy projects. Sponsors included the Nebraska Sierra Club and the Natural Resources Defense Council.