Will Walter Palmer Be Charged for Killing Cecil the Lion? 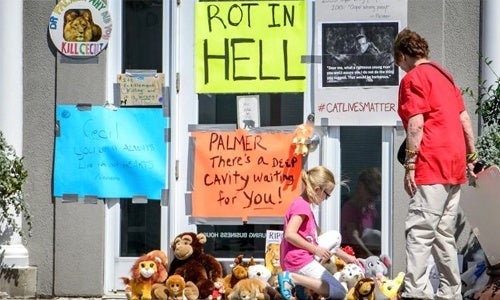 The Internet outrage in response to the death of Cecil the Lion is incredible. The Internet is abuzz with stories lionizing Cecil and vilifying Walter Palmer. For those not up to speed, Walter Palmer, a dentist from Minnesota admitted to hunting and killing Cecil the Lion, the star attraction at Zimbabwe’s Hwange National Park. Zimbabwean officials have accused two Zimbabwean men and Palmer of poaching Cecil because at least one of the men did not have a proper permit to hunt a lion in that area. Palmer apologized and claims he had no idea it was a famous lion and believed the hunt to be legal. He paid his guides at least $50,000 for the hunt.

Still, people worldwide took to social media to express their outrage over the killing. A number of celebrities tweeted their disgust about the trophy hunt, including Sharon Osbourne who had this to say:

I hope that #WalterPalmer loses his home, his practice & his money. He has already lost his soul…

Long time conservationist Jane Goodall was deeply devastated to hear about the killing, but she was able to find a silver lining in the famed lion’s death. On her blog, she writes:

I was shocked and outraged to hear the story of Cecil, Zimbabwe’s much loved lion. Not only is it incomprehensible to me that anyone would want to kill an endangered animal (fewer than 20,000 wild lions in Africa today) but to lure Cecil from the safety of a national park and then to shoot him with a crossbow…? I have no words to express my repugnance. He was not even killed outright, but suffered for hours before finally being shot with a bullet. And his magnificent head severed from his wounded body. And this behaviour is described as a “sport.” Only one good thing comes out of this – thousands of people have read the story and have also been shocked. Their eyes opened to the dark side of human nature. Surely they will now be more prepared to fight for the protection of wild animals and the wild places where they live. Therein lies the hope.

Though some think the outrage has gone too far. Mia Farrow is being criticized because she tweeted Palmer’s business address. As of Tuesday, Palmer closed his practice because he was publicly shamed on his practice’s website, its Yelp review and its Facebook page. Hundreds gathered yesterday in front of Palmer’s office to protest the killing. Signs read “Killer” and “I am Cecil” and members of the crowd chanted “Justice for Cecil.”

Some, though, even think the story is “a lie” and a “joke,” as musician, avid hunter and National Rifle Association board member Ted Nugent put it. In a Facebook post, Nugent criticizes those who are angry over the killing of Cecil:

The whole story is a lie. It was a wild lion from a “park” where hunting is legal and essential beyond the park borders. All animals reproduce every year and would run out of room and food to live without hunting. I will write a full piece on this joke ASAP. God are people stupid.

It remains to be seen whether Palmer will face any charges for his involvement, according to the nonprofit LionAid. The two Zimbabwean men, a professional hunter and a concession owner were arrested and released on bail. “Bronkhorst [the hunter] has been suspended from the Zimbabwe Professional Hunters and Guides Association. He will likely abscond rather than face trial unless he is confident of the possible bribes he has paid to an entirely corrupt judiciary,” says LionAid. “The concession owner is allegedly related to the Zimbabwe Minister of Transport and will therefore be immune from prosecution.”

LionAid believes Palmer likely won’t face any charges. He was merely a “client” of the guides and entrusted them to follow the rules and regulations of the country, says LionAid. “The U.S. does have an extradition treaty with Zimbabwe that covers crimes punishable for more than a year in jail,” says NBC News. “Minnesota Congresswoman Betty McCollum has asked the U.S. Attorney’s Office and U.S. Fish and Wildlife Service to investigate whether any American laws were violated.” Palmer already has one felony on his record. In 2008, he pled guilty to making false statements to U.S. wildlife officials about a black bear he hunted and killed in Wisconsin. He was fined $3,000 and put on probation.