Will Toxic Fracking Wastewater Be Transported by Barge? 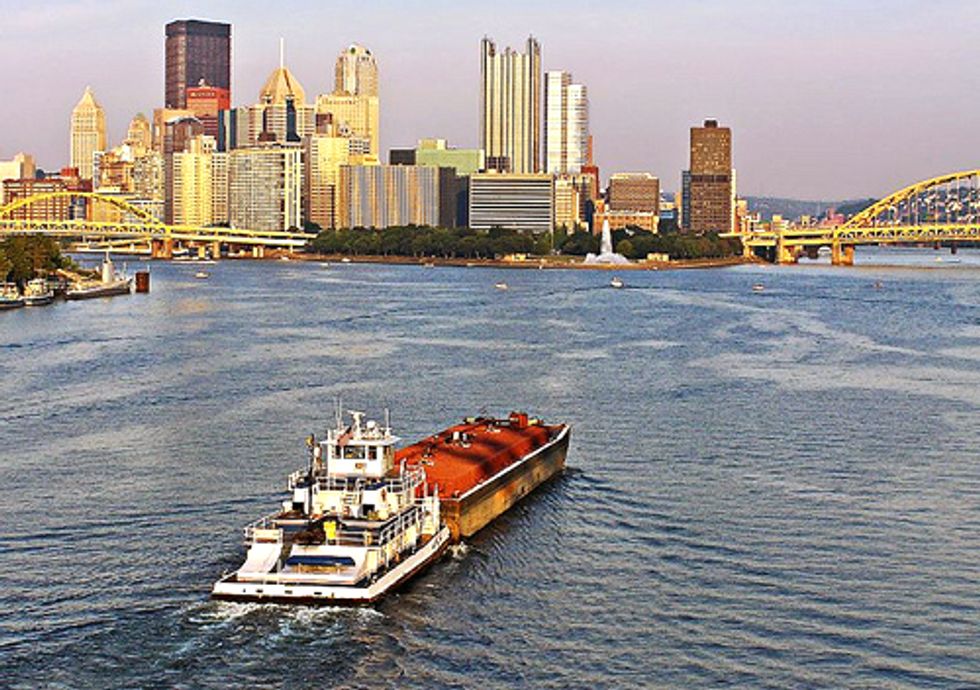 The shale gas drilling industry wants to move its wastewater by barge on rivers and lakes across the country. But the U.S. Coast Guard, which regulates the nation’s waterways, must first decide whether it’s safe.

“It may be hazardous,” said Commander Michael Roldan, chief of the Coast Guard’s Hazardous Material Division, stressing the word ‘may.’ “If it is, it would not be allowed to ship under bulk.”

Right now, he pointed out during an interview with PublicSource, it can’t be shipped by barge, even though there has been confusion in Pittsburgh, West Virginia and Ohio about whether it could be.

The Coast Guard has been considering whether to allow the industry to use the waterways for about a year, according to Roldan, who said the question came up when the Marine Safety Unit Pittsburgh—the local office of the Coast Guard—called the Washington office to clarify whether bulk transport was allowed after Marcellus Shale drillers began making inquiries.

The Coast Guard’s decision would affect more than Pittsburgh’s iconic three rivers. Nearly 12,000 miles of waterways could be open to these waterborne behemoths, each carrying 10,000 barrels of [fracking] wastewater.

Like so many questions involving the shale gas industry, it’s a divisive one. Environmentalists said the possibility of a spill that could contaminate Pittsburgh’s rivers with chemicals isn’t worth the risk. But industry officials who advocate waterway transport said barges are the safest, and cheapest, way to move this stuff.

“It’s not just a contamination of a waterway,” Hvozdovich said. “You’re talking about the contamination of the drinking water supply for about half a million people ... It seems like a very bad idea.”

However, industry officials and transportation experts counter that other industrial materials, some toxic, are moved on barges now. They include chlorine, hydrochloric acid and anhydrous ammonia. Why should the drilling industry be treated differently? they ask.

Anyone who says moving the wastewater is a danger doesn’t know what’s on the waters already, said John Jack, vice president of business development and operations for GreenHunter Water, a company that handles wastewater for major oil companies.

Hydraulic fracturing, or fracking, requires about five millions gallons of water per well. Water is combined with chemicals and sand and shot deep underground, releasing pockets of gas from shale rock formations.

Depending on the well, about 15 to 80 percent of what was injected returns to the surface. That’s called ‘flowback.’ Plus, the well continues to regurgitate naturally occurring water from inside the shale, which is called ‘produced water.’ Both liquids become wastewater, which is often called “brine.”

Complications arise for the Coast Guard’s analysis because companies use proprietary mixtures of chemicals in fracking. And, salt, hydrocarbons and radioactive elements that occur naturally underground catch a free ride with the watery mixture to the surface.

“If there wasn’t the variability, this would be a much easier process,” Roldan said.

The agency is determining appropriate ‘ceilings’ for each component in the wastewater. Companies that want to ship by bulk would have to test their wastewater first. If the components are under the Coast Guard’s ceilings, companies would be given the green light, assuming approval.

Workers and inspectors on the barges could be at risk after long-term exposure, he said, and the agency would likely require regular testing of the barges for radioactivity.

Roldan couldn’t say when the Coast Guard’s determination of whether wastewater can be safely moved on barges would be complete. In part, that is because the nationwide issue is complicated. For example, experts from the U.S. Environmental Protection Agency, Departments of Transportation (DOT) and Department of Energy have weighed in already.

Others, including a committee established by the White House, will likely review the draft proposal.

The agency plans to publish its proposal on transporting wastewater in the Federal Register. Then, the public and the industry will have an opportunity to weigh in.

But there has been great confusion at the ports about the rules.

Officials at GreenHunter, which moves wastewater for some of the largest drilling companies in the Marcellus and Utica Shales by truck, planned to start using barges before the end of the year because they believed it was allowed, Jack said. They’ve been investing in five terminals in Pennsylvania and West Virginia.

“I’ve had the regional commanders out to our sites and nobody told us that we couldn’t” move it by barge, he said. His understanding, he said, is that it’s being done in Texas and Louisiana.

The Pittsburgh office of the Coast Guard declined to comment.

But Roldan’s reaction was immediate when asked whether any company is allowed to do this. “No, they’re not allowed,” he said. “You may want to tell them before we catch them.”

However, he said he understood the confusion because of the way the current regulations are worded. “A liberal reading … could lead to a misinterpretation,” he said.

One question the agency couldn’t answer is the expected volume of wastewater that would be shipped over the rivers.

“We’ve been asking ourselves this,” Roldan said.

While about 99 percent of the waste from shale drilling is just water, the remaining one percent is salt, chemicals and radioactive particles.

A spokesman for the Marcellus Shale Coalition declined to answer questions about moving waste on barges and instead emphasized the industry’s commitment to recycling wastewater.

Today, new technology has increased the capacity for on-site recycling, but that is costly. Transporting the waste off-site to disposal or treatment locations is still needed by the industry.

Shale gas companies have good reason to eye the waterways.

Transporting wastewater by barges has environmental, safety and economic benefits, Jack, of GreenHunter, said. For example, a major drilling company would save 58,000 trucking hours by using barges.

And trucks have about 2,000 accidents for every barge accident, he said, citing data from the DOT and the Coast Guard.

James McCarville, executive director of the Port of Pittsburgh Commission, an agency that advocates for waterway transport, said using barges is a good idea.

“The more that it can be moved on waterways, the less wear and tear of roads,” he said, adding that barges also produce less air pollution than trucks.

And they’re a fraction of the cost. Barges cost only about 10 percent of the cost to move the waste by truck, said Jim Kruse, director of the Center for Ports and Waterways Institute at Texas A&M University. They are 20 to 30 percent cheaper than trains, he said.

The change would not eliminate trucks because they'd still be needed to get the wastewater from the drill rigs to the barges.

“We are regulated by just about everybody,” he said, listing federal and state agencies that oversee barge companies. Stephaich said he’s confident that wastewater will be moved responsibly.

Operators like Campbell may have to purchase new equipment, retrofit their infrastructure, and train their crews.

Benjamin Stout, a biology professor at Wheeling Jesuit University about 60 miles southwest of Pittsburgh, is one expert who didn’t know about the Coast Guard’s review.

For example, wastewater contains bromides. Bromides transform into carcinogens when they are pumped through water treatment facilities, Stout said. (Stout is a board member of FracTracker, a non-profit that disseminates data about the shale gas industry. Both FracTracker and PublicSource are funded, in part, by the Heinz Endowments.)

If there was a barge accident, the treatment facilities would have to shut their intake valves of river water, he said. Cities such as Pittsburgh and Wheeling use water from the Ohio River for drinking.

Despite his alarm, Stout said he is glad that the Coast Guard is studying the issue because it’s one more determination about an industry that currently doesn’t offer a lot of transparency.

Asked whether the Coast Guard is being lobbied by the industry, Roldan said: “We’re not really feeling pressure. We could deny it.”