Will This Christmas Be the Warmest of Your Lifetime? 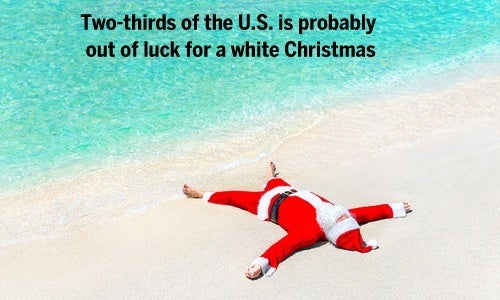 If you’re dreaming of a white Christmas in the eastern and central U.S., you can probably keep dreaming. As EcoWatch reported last week, the unseasonably warm weather has set a number of December records.

#Christmas week could be one of the warmest on record in parts of the East. https://t.co/olJgO2jOCZ pic.twitter.com/2pCopyKIQ4

Many cities in the eastern and central U.S. will see temperatures 10-20 degrees above average this week. If you live in the Eastern or Central U.S., Friday could be “one of the warmest Christmas Days of your lifetime,” The Weather Channel reported Sunday.

“Several cities in the East will likely see their warmest Christmas Eve or Christmas Day on record, adding to the more than 2,600 daily record high temperatures that have been tied or broken across the Lower 48 in the first 19 days of the month. This mild forecast means the prospect for a white Christmas is highly unlikely for many east of the Rockies.”

We could potentially see the warmest #Christmas in living memory in the East: https://t.co/dkv3yWkkNT? #travel pic.twitter.com/4VTW4uM0IQ

“Due to the warming effects of the strong El Niño climate pattern, many places that often have a good chance of seeing snow Christmas Day will miss out this year,” explained AccuWeather. “El Niño has helped to strengthen a west-to-east jet stream that delivers mild Pacific air across the U.S.”

“There’s just not going to be enough cold air to support accumulating snow,” AccuWeather Meteorologist Brett Anderson said. “Even if small amounts do fall [in the eastern U.S.] leading up to the holiday, it won’t stick around, added AccuWeather. “The warm ground would cause melting very quickly.”

El Nino will dash the hopes of many who are hoping for a white Christmas: https://t.co/vsi8MqJTlo pic.twitter.com/Vr6bZ521jQ

This has been by far the hottest year on record, and it’s ending with an exclamation point. Holiday shoppers in New York’s Rockefeller Center have been checking off their lists in weather that’s an eerie 20 degrees warmer than normal. Meanwhile, another stack of global temperature records has fallen.

Last month was the hottest November in 136 years of data, according to U.S. figures released on Thursday, making it the ninth record-breaking month of 2015. This year has been so far off the charts, it’s certain to go down as the hottest year on record even if December turns out to be unusually cool (it won’t).

El Niño is largely responsible for this year’s extremes, but make no mistake: This is what global warming looks like. Before this year, 13 of the 14 hottest years fell in the 21st century. The thermometer creep is relentless.

It’s not just the U.S. feeling the heat, either. From the UK to Australia, El Niño exacerbated by climate change is driving record warmth. Adelaide, Australia, where it’s currently summer, set a record for December with four days in a row of temperatures more than 40 degrees Celsius (104 degrees Fahrenheit).

This year’s El Niño is already one of the top three strongest on record and could yet become the strongest, according to the the World Meteorological Organization (WMO). The WMO Secretary-General Michel Jarraud said last month that the impacts of El Niño are only exacerbated by climate change, putting the world in “uncharted territory.”

While many Americans dream of a white Christmas, it’s not actually as prevalent as you might think. Only 25 to 30 percent of the 48 contiguous states is typically snow-covered by Christmas, according to AccuWeather.

This year, however, two-thirds of the U.S. is probably out of luck for a white Christmas.

Is it really December? For much of the U.S., it feels more like April. Tweet us your unseasonable weather photos. pic.twitter.com/FerU0sqZT8