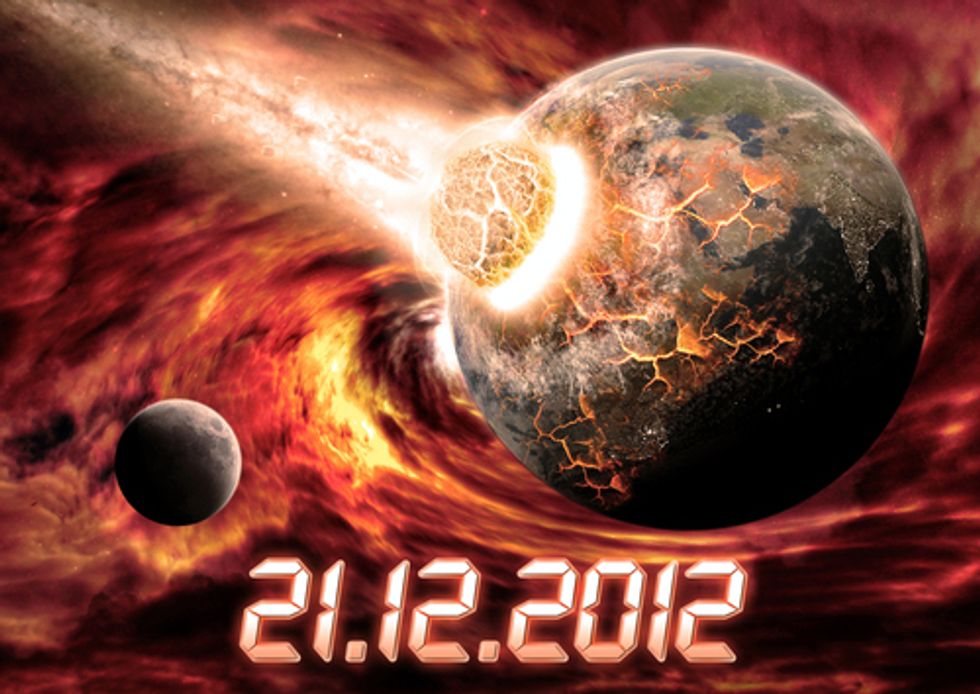 [Editor's note: Will the world end on Friday? Well I don't think so, but my kids, on the other hand, aren't so sure. However, what I do believe is our planet will continue to experience extreme weather. From droughts to wildfires to record temperatures to superstorms, we are in for a ride, especially if we don't quickly reverse the implications of climate change. If we look at the results from the recent UN climate talks in Doha, Qatar, it's clear that we are lacking the leadership worldwide to address our global warming problems. So I encourage you to heed the words below and be prepared, but just as important, join the movement working toward a sustainable world.]

Based on interpretations of the ancient Mayan calendar, some people are predicting the world will end on Dec. 21. Others believe that instead of doomsday and destruction, the day will mark a new era for humanity and will be a time for celebration.

Such beliefs aside, what we know with certainty is that Earth has a tremendous capacity to generate natural disasters on any day of any year. For this reason, U.S. Geological Survey (USGS) scientists continue to look for ways to better forecast a wide range of natural hazards and protect our communities.

Let’s take a closer look at the state of the science—what we know and what we don’t know—about our ability to forecast natural disasters.

Can We Predict Earthquakes?

Despite claims to the contrary, no reliable short-term earthquake prediction method has ever been developed. Nor do scientists expect to develop a method in the foreseeable future.

However, based on scientific data, probabilities can be calculated for future earthquakes. For example, comprehensive assessments of long-term earthquake rates in California tell us there is roughly a 2-in-3 chance that a magnitude 6.7 or larger earthquake will strike in the next 30 years in the greater San Francisco Bay Area. Within the state of California as a whole, earthquakes this large are virtually certain (a 99 percent probability) in that same time frame.

USGS scientists are also working with university colleagues to gather objective and quantitative information on which to base shorter-term earthquake forecasts. This work includes developing better methods to quantify changes in probability based on recent earthquake activity. For example, scientists are looking at the probability for a larger earthquake after an initial earthquake. They are also developing approaches to communicate these probabilities that will be most effective at supporting appropriate decision making.

The U.S. is home to 169 active volcanoes, many of which could erupt at any time. Fortunately, volcanoes generally show signs of unrest hours, weeks and months before they erupt. Changes in gas emissions, swelling of a volcano, and swarms of small earthquakes are signs that a volcano is awakening. All of these changes can be detected with proper monitoring equipment.

The USGS National Volcano Early Warning System is designed to detect these signs of unrest at the earliest stages. The USGS issues warnings and alerts of potential volcanic hazards—including imminent or ongoing eruptions, ash fall forecasts and when eruptions have ended—to responsible emergency-management authorities and those potentially affected. These warnings prevent episodes of volcanic unrest from becoming volcanic disasters.

Learn more and see current alerts and status for volcanoes in the U.S. by visiting the USGS Volcano Hazards website.

Landslides occur in all 50 states and pose a significant risk in many areas. Scientists know landslides are likely on the west coast during its rainy season from November to March, during spring and summer thunderstorms in the western mountain states, and during hurricane season along the east coast. People at especially high risk for landslide damage are those living on or below steep hill slopes.

Wildfires can lead to flash flooding and debris flow, as vegetation is removed that would have served as a stabilizing factor and the remaining burned soil is less able to absorb rainwater. Landslides can also occur from earthquakes, volcanic activity, changes in groundwater, or disturbance and change of a slope by man-made construction activities.

USGS scientists produce maps of areas susceptible to landslides and identify what sort of rainfall conditions will lead to such events. The USGS is working with the National Weather Service on a prototype Debris Flow Warning System to help provide forecasts and warnings about what areas are at imminent risk of having a debris flow or mudslide when rainfall thresholds are met.

For more information, visit the USGS Landslide Hazards Program website. Report your landslide experiences and sightings at the new USGS “Did You See It?” website.

Wildfires are a great concern when there is a lack of precipitation, particularly during the summer months when the weather becomes hot and dry. When there is no water, wildfires can spread very quickly and can be hard to control. Climate change and the resulting hotter and arid conditions are expected to significantly increase wildfire frequency and severity.

The USGS plays an integral role in preparing for and responding to wildfires. The USGS provides tools and information before, during and after fire disasters to identify wildfire risks and reduce subsequent hazards. By looking at previous wildfires, scientists can learn more about ignition sources, burn severity, patterns, season of burning and fire size. The USGS also provides real-time geospatial support for firefighters during the events. This includes up-to-the minute maps and satellite imagery about current wildfire extent and behavior.

Hurricane season runs from June 1 through November, with September as the peak time when they are most likely to strike. But hurricanes and tropical storms can hit at other times as well.

NOAA is responsible for monitoring and issuing warnings for hurricanes and tropical storms. The USGS works with NOAA and provides information on associated coastal vulnerability and change. Before, during and after these events, the USGS assesses the likelihood of beach erosion, overwash or inundation. Scientists also measure storm surge and monitor water levels of inland rivers and streams.

Flooding from storms is another concern, as is drought from lack of rainfall. The USGS conducts real-time monitoring of the nation’s rivers and streams, and you can visit USGS WaterWatch to see whether river levels are higher or lower than normal. You can also use USGS WaterAlert to receive texts or emails when water levels at a specific streamgage exceed certain thresholds. The National Weather Service relies on timely and accurate USGS data to issue flood warnings, and the partnership between the two agencies runs deep. Together, the USGS, the National Weather Service and the U.S. Army Corps of Engineers are also developing flood inundation maps that show, street by street, block by block and hour by hour exactly where the flood waters will be.

What is a magnetic storm? The sun is always emitting a wind of electrically charged particles that flows outward into space. If these concentrations of solar wind are directed towards the Earth, then the magnetic field of the Earth in space (the magnetosphere) can be disturbed, sometimes for days.

Large magnetic storms can cause loss of radio communication, affect global-positioning systems, damage satellite electronics and cause electrical blackouts. Damaging storms occur about four times a decade, with smaller events occurring more frequently. Magnetic storms can be detected up to two days in advance by monitoring the sun. They come in all sizes, but the largest storms tend to occur when sunspots (concentrations of magnetic energy on the surface of the sun) are most numerous.

The monitoring of “space weather” conditions is a responsibility of several U.S. government agencies, including NOAA, NASA and the U.S. Air Force. The USGS has the unique responsibility of monitoring geomagnetic activity at the Earth’s surface, close to where most of the effects of magnetic storms are actually realized. Learn more and view near-real time conditions of the magnetic field.

Be Prepared, Every Day

The question to consider on Dec. 21, and every day is: Have I done everything I can to ensure that my family and I are prepared, should a disaster strike? This includes preparing and practicing your emergency plan and building a disaster supplies kit with food, water and basic needs. Natural disasters will continue to occur, on any given day, but a more informed scientific understanding can lead to better preparedness and safer communities.