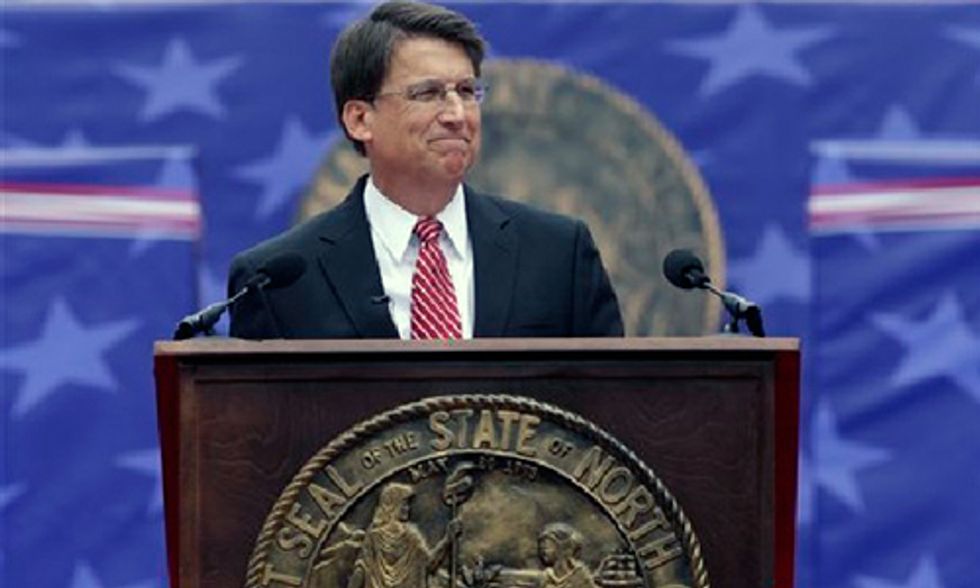 “With or without legislation, we're going to move forward to protect the waters of North Carolina from coal ash.” — Governor Pat McCrory, Aug. 2

Any informed observer of North Carolina politics is shaking their head at my headline—while Pat McCrory is not, himself, a Tea Party fanatic, he has made his peace with their brand of reaction as Governor, allowing the legislature which they cow to undo years of moderate progress on issues ranging from education to the environment. No, Tea Party impeachment is not in the Governor’s future—although loss of office to a Democrat in 2016 might be.

Gov. McCrory had been collaborating with the Republican legislature to overturn decades of state progress on environmental protection without much seeming political price until Feb. 2, when 80,000 tons of coal ash and contaminated water flooded into the Dan River from an improperly maintained Duke Energy coal ash pond in Eden, North Carolina.

Surprisingly, however the Tea Party and legislative Republicans don’t seem in the slightest fazed by the Governor’s assertion of executive muscle—there’s not a single searchable peep expressing concern over McCrory’s announcement that he would act even if his legislature did not. This disparity tells you a lot about what is really behind the Boehner lawsuit over President Obama’s imagined executive over-reach and the even more high-pitched Sarah Palin calls for impeachment.

Compare McCrory’s quote, above, with Obama’s pledge to act without Congress in the State of the Union: “If Congress won’t act soon to protect future generations, I will.” Or look at the statement by White House Press Secretary Dan Pfeiffer “If Congress doesn’t act, the president will.” They might as well have the same speech writer.

Obama’s statements, however, unleashed a tidal wave of right-wing hyperventilation. Rand Paul said that Obama was acting like a king, "someone who wants to bypass the Constitution, bypass Congress—that's someone who wants to act like a king or a monarch." (The specific issue that provoked Paul was Obama’s intention to start enforcing existing federal gun laws). Paul’s comments were only the opening salvo in a sustained Republican assault on the President for carrying out his well established constitutional role.

Texas Senator Ted Cruz published a series of four attacks on Obama’s alleged executive overreach entitled, The Cruz Legal Limit. In addition to attacking Obama for following a Supreme Court ruling that U.S. Environmental Protection Agency (EPA) had to limit carbon pollution, Cruz also identified as supposed abuse of power some petty bizarre examples: Obama’s nomination of Timothy Geithner to be Treasury Secretary, the fact that his Attorney-General made arguments in Supreme Court cases which the Supreme Court rejected, that Obama signed a Stimulus bill passed by Congress, and finally that the President spent the appropriations made by Congress and collected only the taxes authorized by Congress, thereby increasing the federal deficit. Cruz even called it an abuse of Executive Power that there are a large number of federal employees who owe back taxes! (He did not tell us how many of them have only owed such taxes since Obama became President, or how many of them are Democrats).

Indeed, in some cases the Republicans are attacking the President for following judicial orders—for example, that Supreme Court decision, in response to lawsuits by Massachusetts and other states, that EPA had an obligation to regulate emissions of carbon dioxide if science indicated that they caused climate damage.

Following the Boehner lawsuit, conservative columnist Jennifer Rubin wrote “Democrats would be the first to cry bloody murder (of the Constitution) if a Republican president ….gave unilateral exemptions to environmental laws …” Unfortunately, there are literally hundreds of cases (including EPA v. Massachusetts the case mentioned above) in which environmental groups, citizens or states have had to sue Presidents (both Republican and Democratic) for failing to enforce environmental laws, mostly by refusing to issue legally mandated regulations. The failure to issue regulations is the most effective way to grant unilateral exemptions from those laws to entire industries. The most spectacular recent example was the revelation, uncovered by Massachusetts Senator Ed Markey, that Congress thirty years ago told the President to ban exports of US natural gas, but that the necessary regulations have never been issued. Instead the Obama Administration, under intense pressure from the Republicans in Congress, has been issuing permits allowing massive quantities of the should-have-been-banned LNG exports—and the gas industry can hide from the law until the regulations are finally issued.

There appears to be nothing even slightly unusual in the uses Obama has made to date of Executive Power, with the lamentable exception that the President has maintained much of George Bush’s unprecedented expansion of the powers of the government to carry out extreme actions in the name of countering terrorism.

But back to North Carolina; why no uproar? McCrory had been collaborating with the Republican legislature to overturn decades of state progress on environmental protection without much seeming political price until Feb. 2, when 80,000 tons of coal ash and contaminated water flooded into the Dan River from an improperly maintained Duke Energy coal ash pond in Eden, North Carolina.

It took Duke Energy, for whom McCrory worked for almost three decades, two months to begin clean up. In early March, a court ruled that Duke had an obligation under North Carolina law to begin to clean up its 33 coal ash ponds because they were polluting the state’s waterways. Duke immediately appealed the ruling—and the McCrory Administration promptly joined the appeal, seeking to restore a sweetheart settlement it had entered into the previous year which required no clean-up from Duke at all.

But the politics was changing. Under increasing public scrutiny, both houses of the North Carolina legislature began to move new laws which would crack down on polluting coal ash ponds. The new bills, appearing to be supported by McCrory, dealt with the short term issues: “The bill gives Duke Energy 60 days to come up with closure plans for four critical sites, including the company’s Asheville and Riverbend plants...”

But after this promising start, the bill bogged down in differences between the House and Senate over how to decide which ash ponds required full evacuation and which could be capped—the bill failed to pass.

It was this failure which caused Governor McCrory to announce that he would act without the legislature. But McCrory’s action promised even less relief than existing law (according to the March court ruling) required. It’s a fig leaf. That, and the fact that the Governor has otherwise been, however reluctantly, a Tea Party collaborator, explains why his announcement that would use Executive power in the face of a paralyzed legislature has generated none of the heat that the Tea Party has reserved for Obama’s executive orders.

So what is real basis for Republican outrage over Obama’s abuse of power? First, that he is a Democrat. Second, that some, if not all, of his uses of Presidential power will actually advance the platform which the American people endorsed in electing him. And third that the Republicans in Congress don’t have any agenda of their own—so they have to stay on the attack. Since they won’t even let legislation come to a vote in the Senate, they have to attach Obama’s administrative actions—they can’t attack him legislatively. There isn’t enough going on.