Will Rachel Carson Be the First Woman on the $20 Bill? 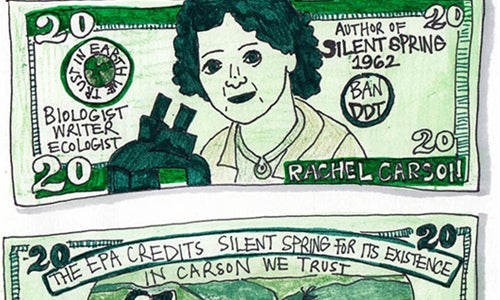 There’s a movement afoot to put a woman on the $20 bill and retire the slavery-supporting, Trail-of-Tears-blazing President Andrew Jackson from his long-held post. 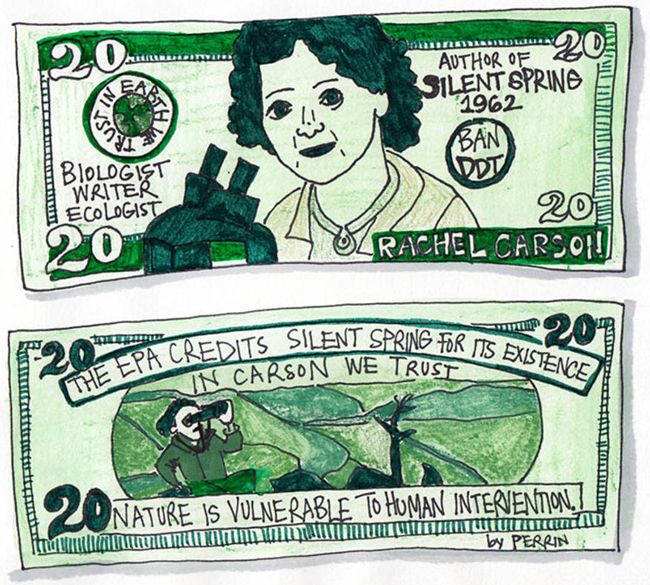 Among the top 15 nominees is marine biologist Rachel Carson. In 1962, Carson authored Silent Spring, a seminal book for the environmental movement that warned of the degradation of natural systems if pesticide use continued unchecked. Drawing from many scientific studies, she described how DDT enters the food chain by accumulating in the fatty tissues of animals (humans, too). Today DDT is classified internationally as a probable carcinogen that persists in the environment for long periods.

Silent Spring was a bestseller, in part because, as the President’s Science Advisory Committee under John F. Kennedy acknowledged when it examined and later defended Carson’s findings, the American public had previously been unawares that pesticides were toxic.

The scientific community also largely backed Carson up, but chemical companies and some government scientists went on the attack. Carson’s gender was regularly used as a means to undermine her work; she was called “hysterical,” a “nun of nature,” and a “sentimental woman who loved cats.”

During the several years it took to finish Silent Spring, Carson learned she had breast cancer—a diagnosis she kept secret for fear that the chemical industry would use it to discredit her. She died in 1964. Carson didn’t live to see the formation of the U.S. Environmental Protection Agency six years later or the 1972 ban of the sale of DDT within the U.S.—two events she helped bring about.

That may be true, but let’s remember her name was Rachel. And she’d look great on a $20.

This article was originally published by onEarth.

Editor’s note: To learn more about the campaign and how to vote, watch here:

6,000 Acres of Old Growth Forests Slated for Logging, the Largest Sale in Decades