Will President Obama Do the Right Thing and Reject the Keystone XL Pipeline? 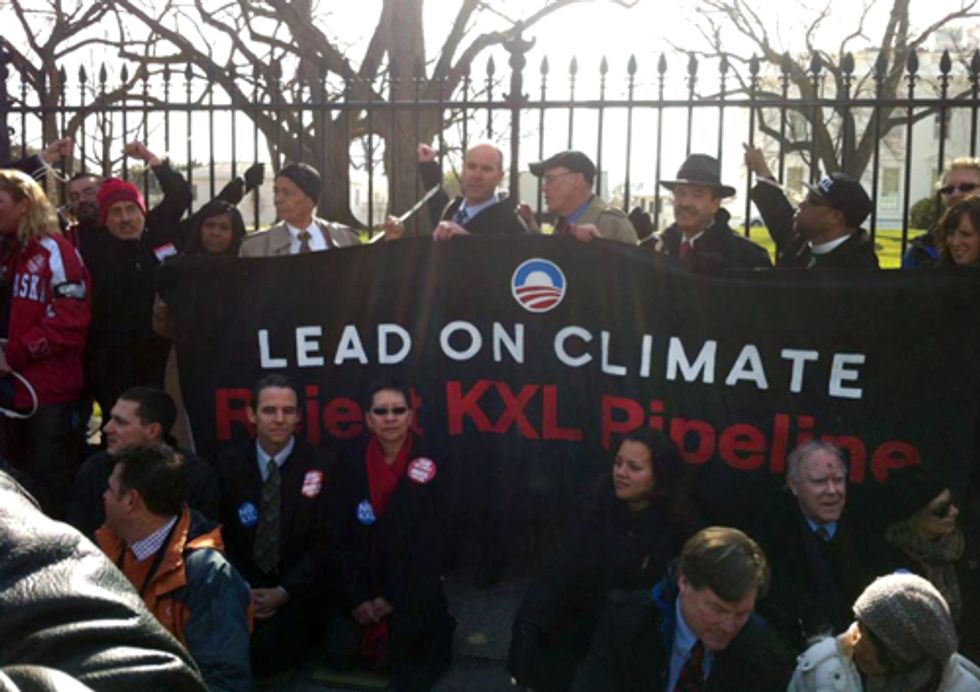 Michael Brune and Bill McKibben (back row, center) where arrested today along with 46 others in a historic act of civil disobedience to stop the Keystone XL pipeline.

My previous visit to the White House was definitely more fun—I took my dad to the annual Christmas party. Today, I returned on a chilly D.C. morning to get arrested alongside friends and fellow environmental do-gooders like Bill McKibben, Andre Carothers, Adam Werbach, Robert F. Kennedy, Jr. and Sierra Club President Allison Chin. We enviros didn't have to brave the cold alone, though. There were almost 50 of us: activists and actors, authors and ranchers, reverends and farmers, union leaders and scientists—and legendary civil rights leader Julian Bond. The one thing we all shared was a conviction: President Obama must act to protect our climate—and that means saying "no" to the Keystone XL tar-sands pipeline.

I'm hopeful. If I weren't, I'd be in the wrong line of work. But the president has come a long way since 2011, when his State of the Union address didn't mention climate even once. Last night, the president stood before Congress to say this:

... if [you] won't act soon to protect future generations, I will. I will direct my Cabinet to come up with executive actions we can take, now and in the future, to reduce pollution, prepare our communities for the consequences of climate change, and speed the transition to more sustainable sources of energy.

Strong words, and I believe the president when he says he will take action on climate, as well as push for clean-energy solutions and greater energy efficiency. What's at issue, though, is not whether President Obama is willing to do something, but whether he's ready to do the right things.

While preparing for today's protest, I read and thought a lot about the great leaders of the past who fought hard and courageously in the name of righteousness. Less than two months before he was felled by an assassin's bullet, Martin Luther King, Jr., gave this answer when asked why he persisted in taking an unpopular stand against the Vietnam War:

We know that enabling the exploitation of Canada's carbon-intensive tar-sands oil would be a huge setback for progress on climate disruption. It could undo all the real progress on carbon-pollution that the president rightly took credit for during his speech last night

A politician might ask whether stopping Keystone XL would be a politic or popular decision. A leader will only care whether it's the right one. My biggest hope? That this president is ready to lead.