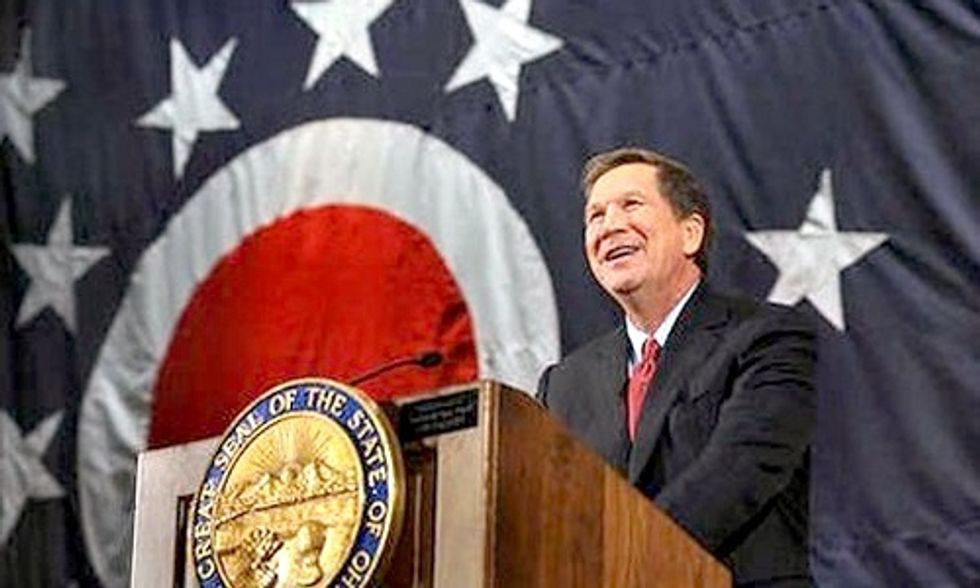 The latest politician to leap toward the GOP nomination is widely known as America’s most anti-green governor. But he has a critical decision coming up that could help change that.

Ohio Gov. John Kasich has established a national reputation as a leading enemy of renewable energy and enhanced energy efficiency.

When he took office in 2011, he opened fire by killing a $400 million federal grant to restore passenger rail service between Cleveland, Columbus, Dayton and Cincinnati.

Columbus is the largest capital city in the western world that people cannot get to by train. It also has no internal commuter rail, making it what some have called “the mid-sized town technology forgot.”

The rail grant had been painstakingly crafted over the better part of a decade by a broad bi-partisan coalition. It was poised to create hundreds of jobs and provide new opportunity for a number of small towns languishing along the restoration route.

The son of a postal worker, Kasich has long touted “jobs, jobs, jobs” as his trademark commitment. The polls were very tight just prior to Ohio’s 2010 election when a check for $1 million came into his campaign chest from Rupert Murdoch, owner of Fox TV, where Kasich had anchored a commentary show. Between his time as a U.S. Congressman and the governor’s race, Kasich amassed a personal fortune by selling junk bonds to government pension funds.

Upon entering the statehouse in 2011 he sent the $400 million rail grant back to the feds with stunning contempt. There were no public hearings, no legislative debates, no discussion with Ohioans who had labored for years to bring the money into the state.

Kasich then attacked renewable energy. Under previous Gov. Ted Strickland, a bi-partisan coalition had constructed one of America’s most successful green power packages. Major wind farms involving some $2 billion in invested capital were poised to pour into northern Ohio.

Wind turbines can be especially profitable in the corridor just south of Lake Erie. The fertile farmland is flat, the breezes are steady, there are plenty of transmission lines and the power can be generated relatively close to urban areas like Toledo, Canton, Cleveland and Akron. Thousands of jobs and radically reduced electric rates were set to revive Ohio’s gutted industrial economy.

A $50 million solar farm was also slated for the southern part of the state. Businesses specializing in rooftop installations were thriving.

He then drove a stake through the heart of Ohio’s wind-powered future. Again with no public hearings or debate, Kasich slipped into law draconian restrictions on the spacing of wind turbines. For no apparent reason other than to kill the wind industry, the bill mandates extreme siting distances from property lines and buildings, which makes commercial turbine development a virtual impossibility in the Buckeye State. And, Kasich has made Ohio the dumping grounds for fracking wastewater.

Yet even that doesn’t quite end the tragedy of Kasich’s epic energy fail.

The infamous Davis-Besse nuke at Oak Harbor, near Toledo, has been uneconomical for years. It’s recognized worldwide as one of Earth’s most dangerously decrepit reactors. Boric acid once ate through all but one-eighth's inch of its pressure vessel, nearly causing a Chernobyl on Lake Erie. Its shield wall is crumbling, as is its overall infrastructure. Old age, mismanagement and corporate greed have left it, among other things, with a number of actual holes poked through its containment dome. Similar shenanigans recently forced the final shut-down of the Crystal River reactor in Florida.

Fifteen years ago the owners of Davis-Besse and the Perry reactor, east of Cleveland, took some $9 billion from Ohio ratepayers to refurbish the two failing nukes in preparation for a “free market” in energy. Cincinnati-based economist Ned Ford has shown that siphoning off that money has helped cripple the industrial economy of northern Ohio.

Today neither nuke can compete with gas and renewables. So FirstEnergy, Davis-Besse’s Akron-based owner, wants the Ohio Public Utilities Commission to gouge $3 billion more from ratepayers to keep Davis-Besse and its 50-year-old Sammis coal burner in operation, even though neither can compete on the open market.

The proposed bailout has sparked anger throughout the state. Most of Ohio’s large commercial and industrial energy users oppose the plan, along with the core of the state’s consumer and environmental communities. Demonstrations at the PUCO have been well-attended and Ohio’s biggest home newspaper—the Cleveland Plain-Dealer—has editorialized against the bail-out.

As a result of public pressure, the PUCO has repeatedly postponed its decision.

Nor has the governor yet weighed in.

But Kasich will ultimately have to be heard on an issue that could decide the state’s financial and industrial future. For Ohio’s teetering economy, sinking yet another $3 billion into obsolete fossil/nuke burners would be suicidal. Germany, California and other advanced powers are now transition into a future defined by green power. If Kasich continues to steer Ohio away, the state is doomed to obsolescence and decline.

Technically the issue is the Public Utilities Commission’s to decide. But Kasich is well positioned to become at least the GOP’s Vice-Presidential nominee. Ohio is always a key swing state, making the governor a valuable geographic asset.

As a candidate, where he stands on the future of energy will be heavily scrutinized. Thus far he seems firmly in the Kochcamp, supporting the billionaire brothers’ attacks on any energy source that threatens their gargantuan investments in obsolete fossil fuels/nukes.

Should that carry over into support for the extremely unpopular Davis-Besse bailout, Gov. Kasich’s already extensive anti-green resume could cause him serious problems as the 2016 presidential campaign progresses.