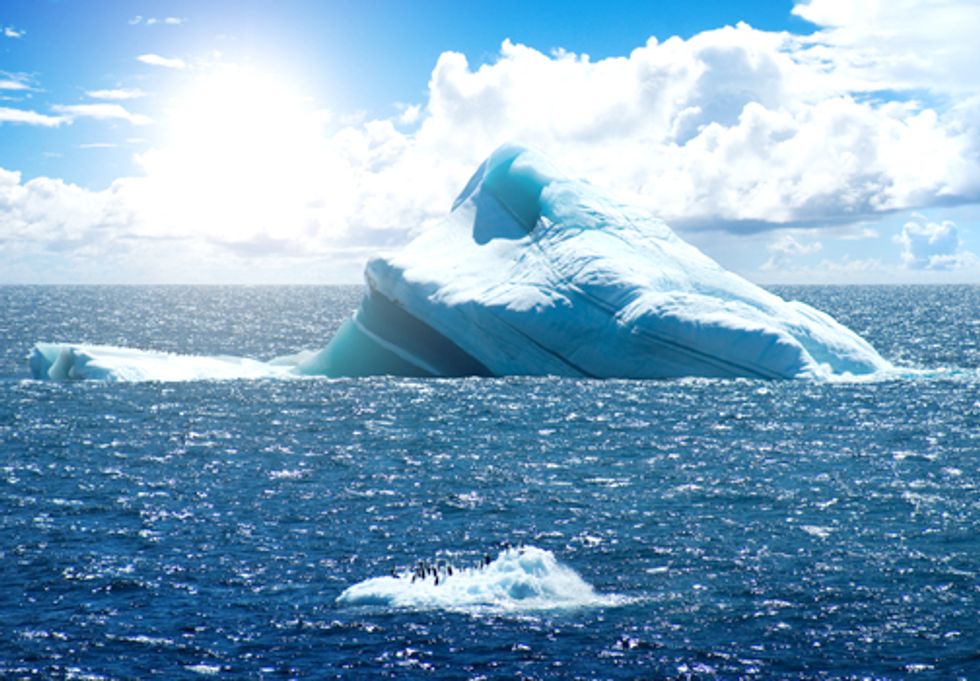 By Martin Williams and Erika Rosenthal

The Arctic is warming twice as fast as the rest of the planet. Last year was a record melt year for both summer sea ice and land glaciers, e.g. the Greenland Ice Sheet, with grave implications for Arctic peoples and biodiversity, and for low-lying nations and communities around the world.
Photo courtesy of Shutterstock

Arctic nations have an extraordinary opportunity to show global leadership to slow regional warming and melting by embracing a proposal to launch talks on an agreement to reduce emissions of the climate pollutant black carbon. Arctic environment ministers have the power to send a strong signal to the Arctic Council when they gather Feb. 5 and Feb. 6 in Jukkasjärvi, Sweden—only the second time ever—acknowledging black carbon reductions as a priority for regional environmental protection.

The Arctic is warming twice as fast as the rest of the planet. Last year was a record melt year for both summer sea ice and land glaciers, e.g. the Greenland Ice Sheet, with grave implications for Arctic peoples and biodiversity, and for low-lying nations and communities around the world. Scientists named 2012 the “Goliath melt year” observing melting on more than 90 percent of the mammoth Greenland Ice Sheet’s surface; sea ice retreated to half the size it was when measurements began in 1979.

While carbon dioxide (CO2) reductions remain the backbone of efforts to limit the long term consequences of climate change in the Arctic and globally, its 100-year atmospheric lifespan means CO2 reductions alone cannot avert further potentially devastating warming and melting in the Arctic in the near term. Rapid reductions in emissions of short-lived climate forcers, including black carbon, a component of fine particle pollution, and methane have been identified as the most effective strategy to slow warming and melting in the Arctic over the near term, giving the cultures and biodiversity of the region more time to adapt and slowing the rise of sea levels by reducing continental ice melting.

Arctic states have a special responsibility since black carbon is a more potent climate forcing agent when emitted from within or near the Arctic because particles have a greater chance of settling on Arctic ice and snow, amplifying warming and melting. A seminal paper published recently by a multinational team of scientists, Bounding the role of black carbon in the climate system, states that black carbon has “twice the climate impact reported in previous assessments" and ranks black carbon as the “second most important human emission …; only carbon dioxide is estimated to have a greater forcing …”

Black carbon reductions are important for health as well as climate. It is a component of fine particulate pollution that is emitted by diesel engines, residential wood heating and some industries, and is associated with over a million premature deaths each year from respiratory and heart disease.

The Convention on Long-range Transboundary Air Pollution (CLRTAP) has led the way. In May 2012 CLRTAP, of which all eight Arctic states are parties, became the first multilateral agreement to address black carbon. Amendments to the Convention’s Gothenburg Protocol establish emissions standards for fine particulate matter and urge Parties to “… seek reductions from those source categories known to emit high amounts of black carbon, to the extent it considers appropriate." These measures were adopted based on the recognition that reduction of black carbon will “… improve air quality, provide significant public health benefits, and provide regional climate benefits by protecting the Arctic and glaciated mountainous regions, in particular from accelerated rates of melting of ice, snow and permafrost.”¹

While groundbreaking, CLRTAP’s emissions ceilings don't apply until 2020 and the black carbon reductions goals are voluntary. Arctic nation leadership is urgently needed to complement and accelerate black carbon efforts under CLRTAP. The Arctic Council’s own work [Task Force] on SLCF and the UNEP Integrated Assessment have shown that black carbon actions by the eight Arctic nations—using available technologies and known practices—can have a significant temperature impact in the region. Time is of the essence—the UNEP assessment showed that emissions reductions before 2030 will have the greatest impact—and Arctic Council nations are better positioned to lead having studied science-based mitigation opportunities in two working groups for more than four years.

An Arctic regional agreement on black carbon, under the auspices of the Arctic Council, would be a much needed step to complement and advance implementation of commitments under CLRTAP, and do more in the region where it is most critical, both to protect the health and ecosystems in the Arctic, and to slow sea level rise. Logical, complementary steps for an Arctic nation instrument on black carbon could start with agreement to submit black carbon emissions inventories, based on CLRTAP guidelines soon to be finalized; to track regional trends and identify mitigation opportunities; and establish a mechanism for reporting and joint consultation on national mitigation action through the Arctic Council. Additional measures that should be considered for inclusion in a regional black carbon instrument include the adoption of a common, circumpolar vision for black carbon emissions reductions and the development of national mitigation action plans for black carbon. A mechanism for technology transfer and finance to facilitate enhanced mitigation action may also be appropriate.

Arctic nations took on a special commitment, in the founding declaration of the Arctic Council, for “… the protection of the Arctic environment, including the health of Arctic ecosystems, maintenance of biodiversity in the Arctic region and conservation and sustainable use of Arctic resources.” In recent years, the Arctic Council has become a platform for the negotiation of regional agreements to help fulfill that pledge, the first on Search and Rescue (2011) and the second, to be signed this year, on oil spill preparedness and response. A decision by the Council to launch negotiations on black carbon reductions in the Arctic would be a welcome complement to the advances under CLRTAP, and an important step for nations of the region to fulfill their commitments to protect the extraordinary peoples, biodiversity and ecosystems of the region. The time for Arctic nations’ leadership on black carbon is now.

Martin Williams is a professor at King’s College London and serves as chair of the Executive Body of the Convention on Long-range Transboundary Air Pollution (CLRTAP). The article reflects his personal views only, not any policy of the CLRTAP. Erika Rosenthal is an attorney with the public interest environmental law firm, Earthjustice.  Both participated in the UNEP Integrated Assessment of Black Carbon and Tropospheric Ozone.