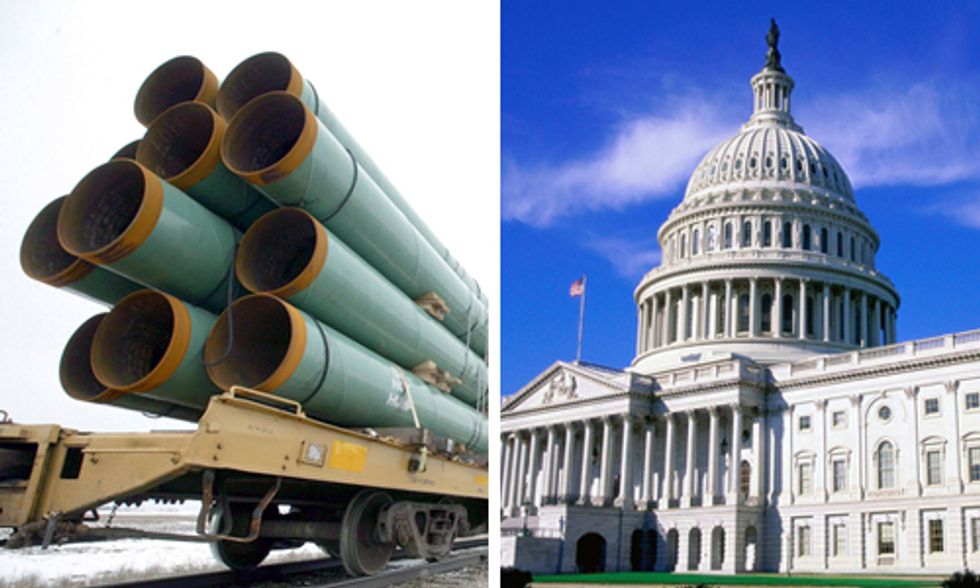 Now that Republicans have taken control of the Senate in addition to the House of Representatives, the attacks on the environment they've long advocated for will most likely rise to the top of the congressional agenda.

Current Senate Majority Leader Harry Reid, who will hand over his gavel to a Republican, most likely to current Minority Leader Mitch McConnell, in January, is a pipeline opponent and so far has blocked Republican efforts to force approval of the project.

One prominent item on their wish list is the Keystone XL pipeline to transport tar sands bitumen oil from Alberta, Canada to the Gulf of Mexico for export overseas. They've been open about their frustration that President Obama has so far heeded the mounting opposition and not allowed the project to move forward. But, with backing from the fossil fuel interests that fund their campaigns, Republican leadership will likely work to push Obama hard to get the Keystone XL done.

Current Senate Majority Leader Harry Reid, who will hand over his gavel to a Republican, most likely to current Minority Leader Mitch McConnell, in January, is a pipeline opponent and so far has blocked Republican efforts to force approval of the project.

"The election of several pro-Keystone Senators puts the passage of Keystone that much closer and shows energy projects like Keystone is a priority for our country," Ryan Bernstein, chief of staff for leading pipeline proponent Senator John Hoeven's (R-ND) chief of staff, told The Hill. "We will be working with Senator McConnell to get a vote on the floor shortly after the new Congress is seated."

In the past, the Republicans in Congress have tried to force the President to swallow unpalatable programs by attaching them to must-pass measures, such as increasing the debt ceiling.

According to National Geographic, "McConnell also has indicated that he may use similar budget tactics to compel a vote to approve the pipeline, which could then require Obama to decide whether to use his veto power."

The northern leg of the pipeline has been on hold during a federal review process, which has been ongoing for six years, with a near-approval in 2011. Keystone XL supporters insist that it's too long and it's been studied enough, while the State Department (which oversees the project because it crosses the U.S./Canadian border) says it's necessary due to the enormous number of comments it's received and ongoing legal challenges in Nebraska.

The president has said he would approve it only if it was clear it would not increase greenhouse gas emissions. Supporters say it won't do so because the tar sand oil, one of the dirtiest fossil fuels, will be extracted, shipped and burned and pollute the environment whether Keystone XL is built or not. In addition, Calgary-based TransCanada, the company behind Keystone XL, has been pushing an alternative proposal to build a different pipeline across the continental to ports in eastern Canada.

Environmental groups hope the president won't succumb to pressure tactics and promise to intensify their opposition.

“If Obama approves the pipeline, it would be a real blow to his legacy on climate," Jamie Henn, director and cofounder of global grassroots environmental group 350.org told The Hill. "He has a lot to lose in terms of his outgoing reputation. We are itching to get back in the fight.”

Lesson for Democrats should be: go on the offensive. You lost the base--go win it back. Rejecting KXL would be a good start.