Is Winter Miserable for Wildlife? 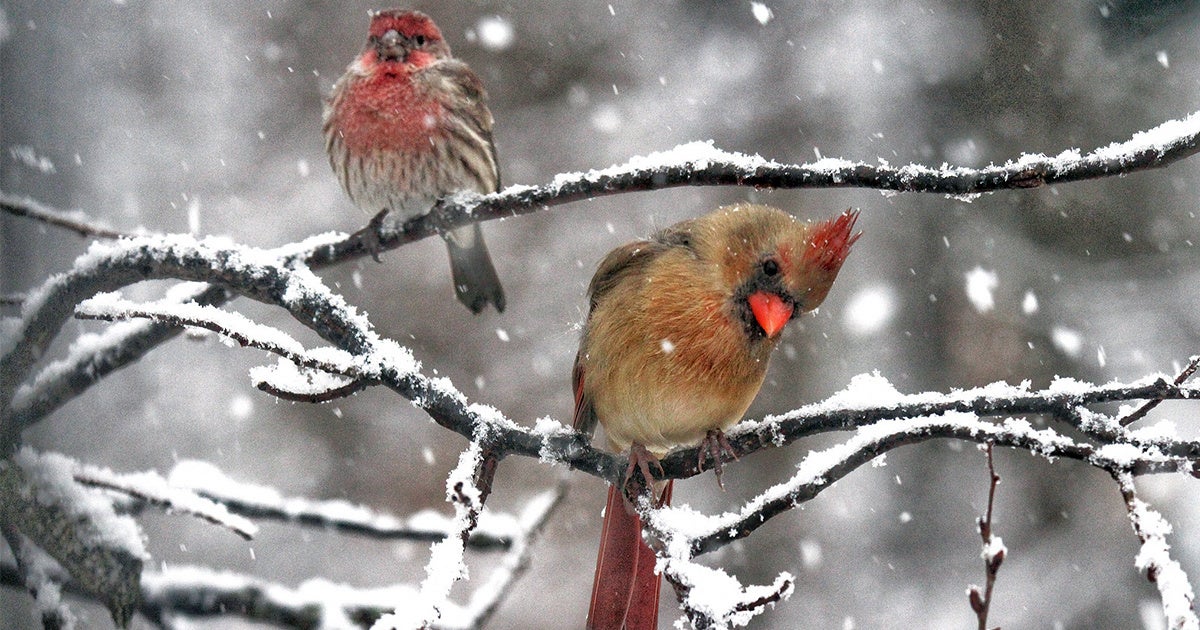 By Bridget B. Baker

While the weather outside may indeed get frightful this winter, a parka, knit hat, wool socks, insulated boots and maybe a roaring fire make things bearable for people who live in cold climates. But what about all the wildlife out there? Won’t they be freezing?

Anyone who’s walked their dog when temperatures are frigid knows that canines will shiver and favor a cold paw—which partly explains the boom in the pet clothing industry. But chipmunks and cardinals don’t get fashionable coats or booties.

In fact, wildlife can succumb to frostbite and hypothermia, just like people and pets. In the northern U.S., the unfurred tails of opossums are a common casualty of cold exposure. Every so often an unusual cold snap in Florida results in iguanas falling from trees and manatees dying from cold stress.

Avoiding the cold is important for preserving life or limb (or, in the opossum’s case, tail) and the opportunity to reproduce. These biological imperatives mean that wildlife must be able to feel cold, in order to try to avoid the damaging effects of its extremes. Animal species have their own equivalent to what human beings experience as that unpleasant biting mixed with pins-and-needles sensation that urges us to warm up soon or suffer the consequences. In fact, the nervous system mechanisms for sensing a range of temperatures are pretty much the same among all vertebrates.

One winter challenge for warm-blooded animals, or endotherms, as they’re scientifically known, is to maintain their internal body temperature in cold conditions. Interestingly though, temperature-sensing thresholds can vary depending on physiology. For instance, a cold-blooded—that is, ectothermic—frog will sense cold starting at a lower temperature compared to a mouse. Recent research shows that hibernating mammals, like the thirteen-lined ground squirrel, don’t sense the cold until lower temperatures than endotherms that don’t hibernate.

So animals know when it’s cold, just at varying temperatures. When the mercury plummets, are wildlife suffering or just going with the icy flow? 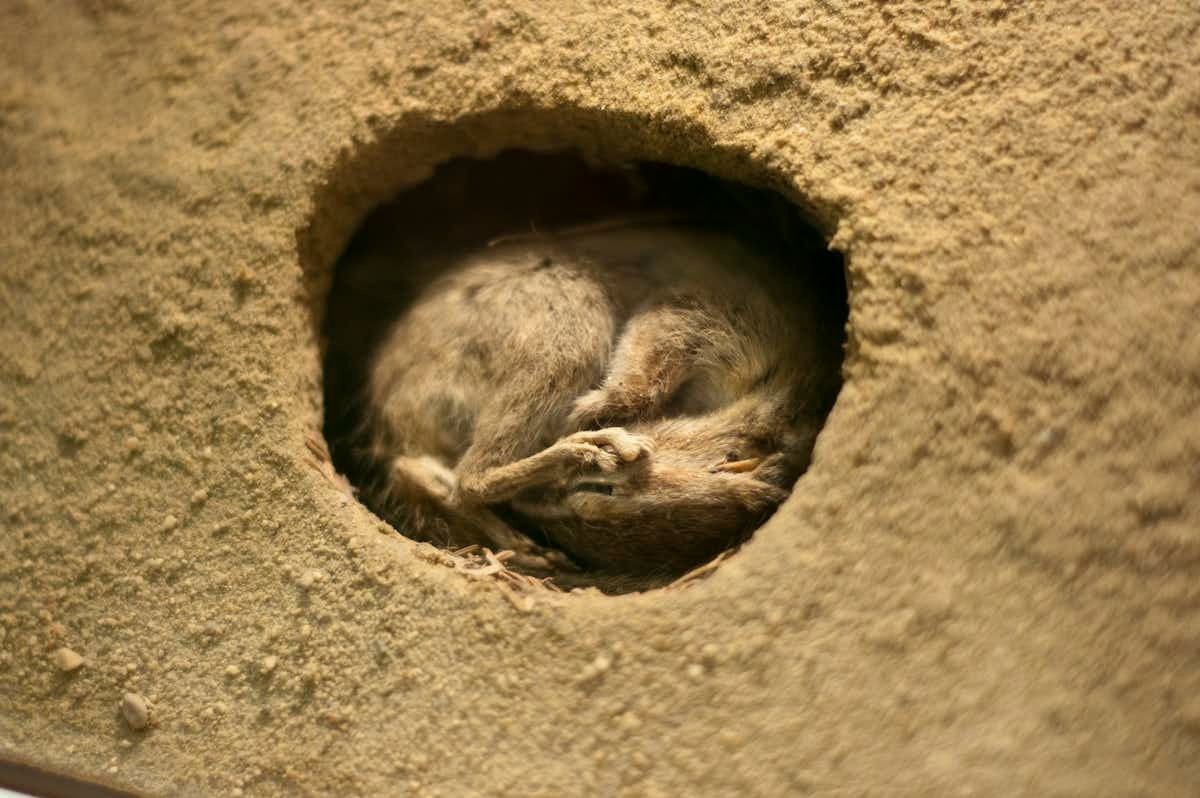 Some animals find a protected spot to wait out the worst of it, like this chipmunk.Michael Himbeault, CC BY 4.0

One Solution: Slow Down and Check Out

Many cold-climate endotherms exhibit torpor: a state of decreased activity. They look like they are sleeping. Because animals capable of torpor alternate between internally regulating their body temperature and allowing the environment to influence it, scientists consider them “heterotherms.” During harsh conditions, this flexibility offers the advantage of a lower body temperature—remarkably in some species, even below the 32 degrees Fahrenheit freezing point—that is not compatible with many physiologic functions. The result is a lower metabolic rate, and thus lower energy and food demand. Hibernation is a prolonged version of torpor.

Torpor has energy conservation benefits for smaller-bodied wildlife in particular—think bats, songbirds and rodents. They naturally lose heat faster because the surface area of their body is large compared to their overall size. To maintain their body temperature within normal range, they must expend more energy compared to a larger-bodied animal. This is especially true for birds who maintain higher average body temperatures compared to mammals.

Unfortunately, torpor is not a perfect solution to surviving frigid conditions since it comes with trade-offs, such as a higher risk of becoming another animal’s lunch.

Unsurprisingly, animals have evolved other adaptations for weathering the winter months. 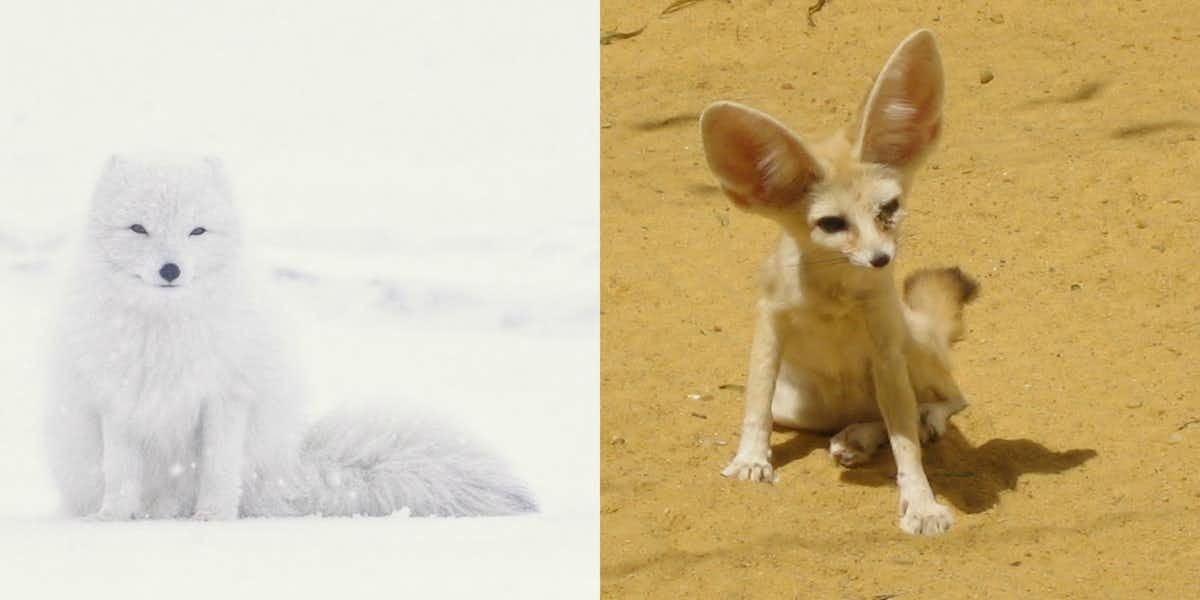 The large ears of a fennec fox would be a liability in a cold climate like where the Arctic fox lives. Jonatan Pie / Unsplash and Kkonstan / Wikimedia Commons, CC BY 4.0

Wildlife species at northern latitudes tend be larger-bodied with smaller appendages than their close relatives closer to the tropics. Many animals have evolved behaviors to help them beat the cold: herding, denning, burrowing and roosting in cavities are all good defenses. And some animals experience physiological changes as winter approaches, building fat reserves, growing thicker fur and trapping an insulating layer of air against the skin beneath the fur or feathers.

Nature has devised other neat tricks to help various animals deal with conditions that people, for instance, would be unable to endure.

Have you ever wondered how geese can appear to stand comfortably on ice or squirrels in snow in their bare feet? The secret is the close proximity of the arteries and veins in their extremities that creates a gradient of warming and cooling. As blood from the heart travels to the toes, the warmth from the artery transfers to the vein carrying cold blood from the toes back to the heart. This countercurrent heat exchange allows the core of the body to remain warm while limiting heat loss when the extremities are cold, but not so cold that tissue damage occurs. This efficient system is used by many terrestrial and aquatic birds and mammals, and even explains how oxygen exchange occurs in the gills of fish. 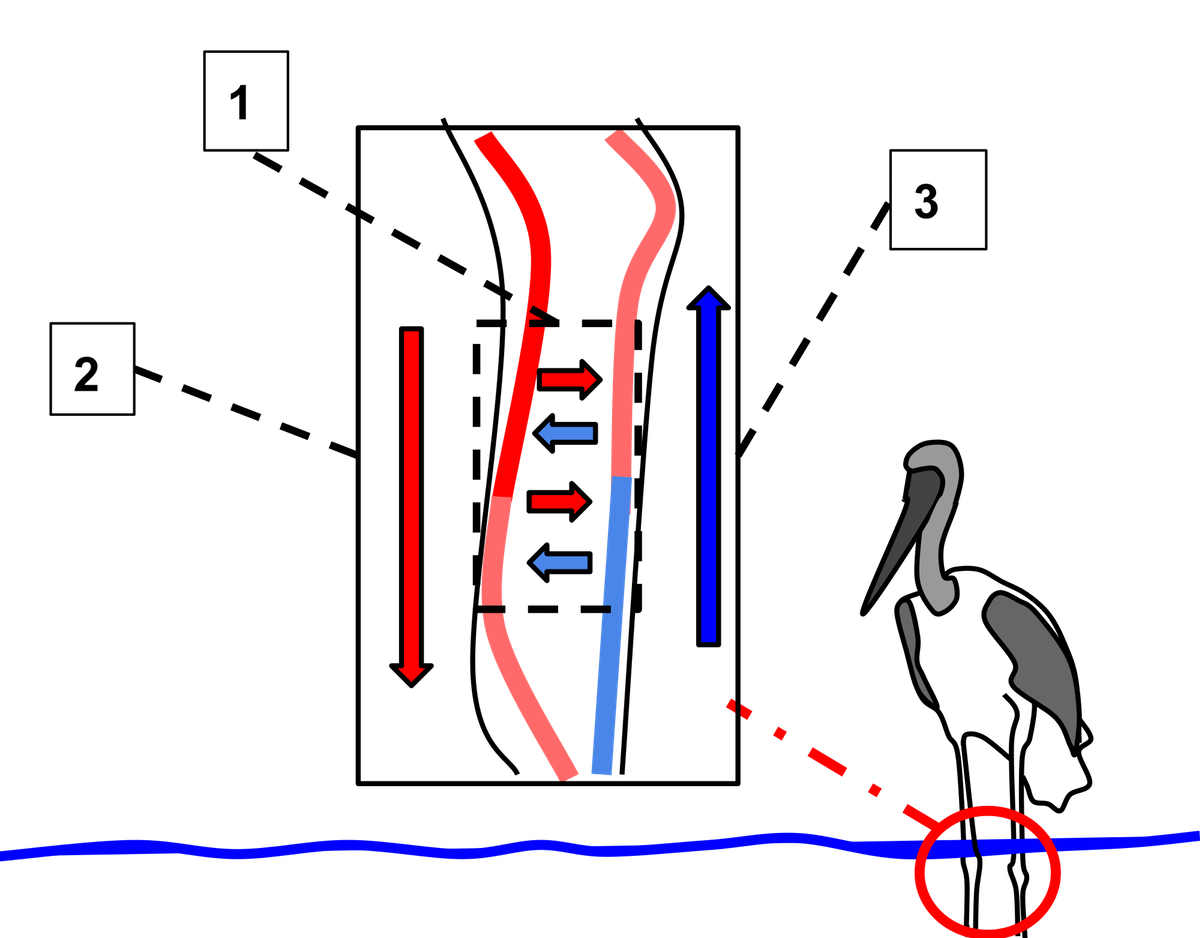 An animal standing in cold water or on ice benefits from countercurrent heat exchange (1). Warm arterial blood (2) flowing away from the heart warms up the cooler venous blood (3) heading toward the heart. Ekann, CC BY-SA 4.0

Speaking of fish, how do they not freeze from the inside out in icy waters? Luckily, ice floats because water is most dense as a liquid, allowing fish to swim freely in not-quite-freezing temperatures below the solidified surface. Additionally, fish may lack the cold-sensing receptor shared by other vertebrates. They do, however, have unique enzymes that allow physiologic functions to continue at colder temperatures. In polar regions, fish even have special “antifreeze proteins” that bind to ice crystals in their blood to prevent widespread crystallization.

Another secret weapon in mammals and birds during long periods of cold exposure is brown adipose tissue or “brown fat,” which is rich in mitochondria. Even in people, these cellular structures can release energy as heat, generating warmth without the muscle contractions and energy inefficiency involved in shivering, another way the body tries to heat up. This non-shivering heat production probably explains why people in Anchorage can contentedly wear shorts and t-shirts on a 40 degrees Fahrenheit spring day.

Of course, migration can be an option—though it’s expensive in terms of energetic costs for wildlife, and financially for people who want to head closer to the equator.

As a species, human beings have the ability to acclimate to an extent—some of us more than others—but we’re not particularly cold-adapted. Maybe that’s why it’s hard to look out the window on a frigid day and not feel bad for a squirrel hunkered down as the winter wind whips through its fur. We may never know if animals dread winter—it’s difficult to gauge their subjective experience. But wildlife do have a variety of strategies that improve their ability to withstand the cold, making sure they live to see another spring.

"The Earth simply can't take the punishment of relentless over-exploitation of its natural resources, poisoning of its atmosphere & #pollution of its #oceans. We need to put aside political differences & work together…": https://t.co/BvXlVJQNon via @EcoWatch  #StopExtinction

Bridget B. Baker is a clinical veterinarian and deputy director of the Warrior Aquatic, Translational and Environmental Research (WATER) Lab at Wayne State University.

Disclosure statement: Bridget B. Baker does not work for, consult, own shares in or receive funding from any company or organization that would benefit from this article, and has disclosed no relevant affiliations beyond her academic appointment.