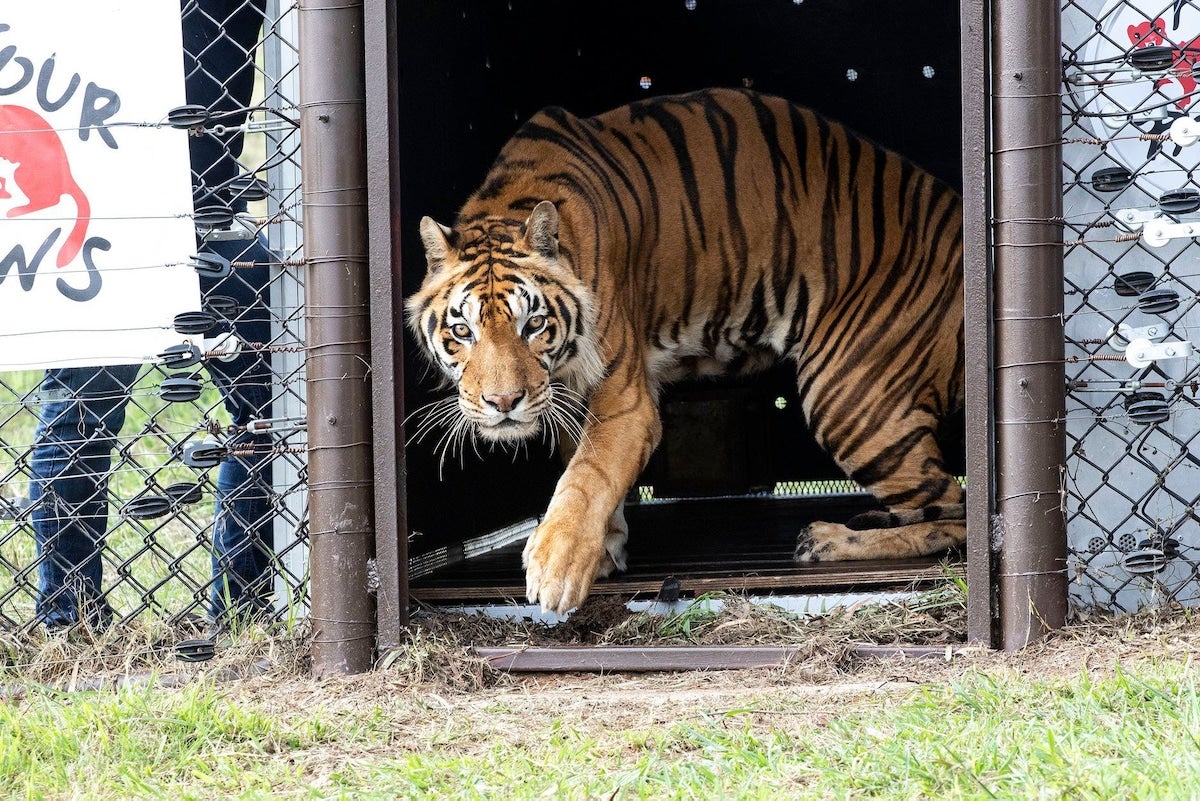 Four Bengal tigers and four lions have been rescued, after much of their lives were spent in circuses and tight living quarters, as part of two rescue operations. They will now live in wildlife sanctuaries in South Africa.

In the case of the tigers, two of the Bengal tigers had been part of a circus, but the traveling circus operators asked a local farmer in San Luis, Argentina to watch after the animals temporarily. But the circus never returned. The tigers later had two cubs, and the big cats spent over 4 years together in a metal train carriage, according to Plant Based News.

“The train carriage was filthy with excrements and leftover meat and bones for a long time but fortunately this is not the case anymore,” said Dr. Amir Khalil, a veterinarian with Four Paws International, which led the rescue operation.

“These tigers have never felt grass or earth under their paws,” Khalil added, as reported by EuroNews. “It’s the first time they can see the sky above them, not just metal bars and a roof.”

The tigers, named Sandro, Mafalda, Messi and Gustavo, now call the LIONSROCK Big Cat Sanctuary in Bethlehem, South Africa home. They are in enclosures, but their new locations are much more similar to their natural habitats, which most of this family has never experienced before.

The lions, named Angela, Bellone, Saïda and Louga were rescued in an operation in France by The Born Free Foundation. Since they were cubs, these lions had been part of various circuses until 2018. After the owner relinquished them, they were held in a rescue center in Lyon, France, until Born Free could safely move them to the Shamwari Private Game Reserve in South Africa.

These big cats had spent most of their lives in a small trailer or forced to perform in traveling circuses. Now, Catherine Gillson, Born Free manager at Shamwari Private Game Reserve, said the lions have enclosures the size of roughly two rugby fields planted with native vegetation to mimic the lions’ natural habitat.

“We are delighted that Louga, Saida, Angela and Bellone are safely with us at Shamwari,” Gillson said in a statement. “The journey of our Lions of Lockdown has been long, but hopefully with each day spent with us in the peace of our sanctuary, they will continue to grow from strength to strength. Their re-homing to our Big Cat Sanctuary at Shamwari will allow them to get as close to experiencing the life they were denied for so many years! The sights, sounds and scents of their fellow rescued big cats will heighten their senses immediately as they begin to acclimatise to their new lives. They are now in their forever home in Africa.”