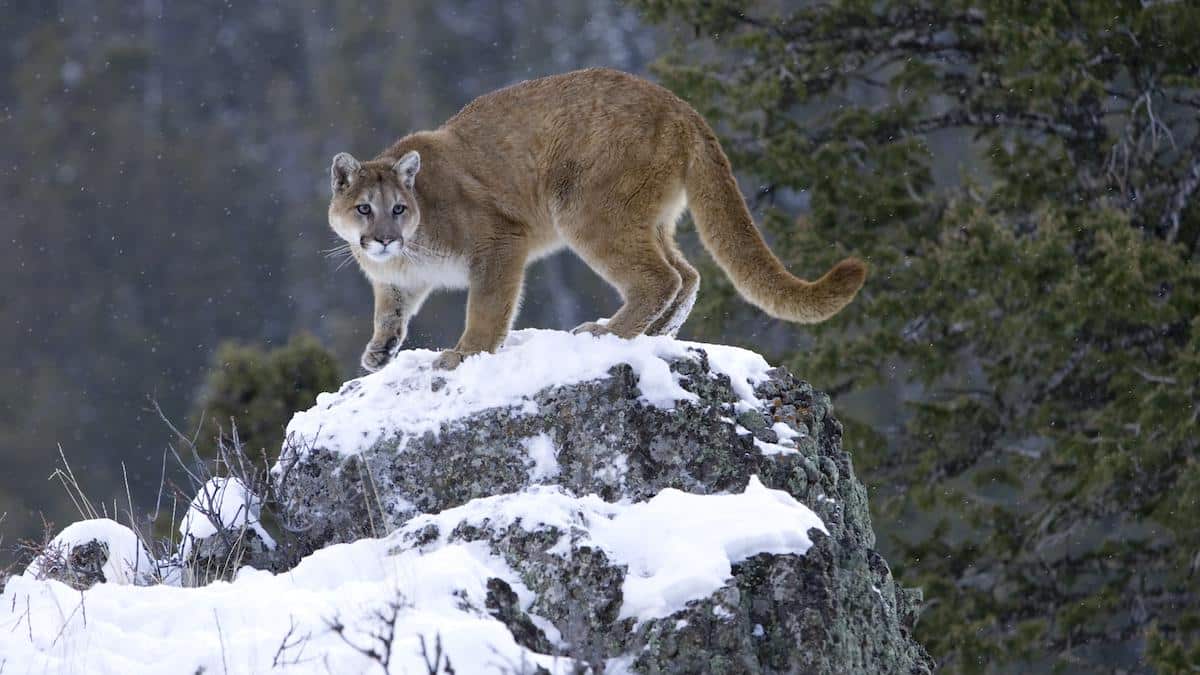 A mountain lion in the Bridger Mountains of Montana. Joe McDonald / The Image Bank / Getty Images

In 2017, a team of researchers went to the Santa Cruz Mountains to study how mountain lions responded to human disturbance. Hanging speakers that broadcasted human voices, they found mountain lions were fearful of the sounds, altering their eating behaviors and the corresponding food chain, The Atlantic reported.

“People often fear large carnivores like mountain lions, but in reality, they are far more scared of us,” Kaitlyn Gaynor from UC Berkeley, who was not involved in the study, told The Atlantic.

Scientists have long understood that human activity impacts wildlife, but most studies have focused on individual species’ behaviors.

For the first time, researchers calculated the global impact of human activity on animal movement, according to the University of Sydney. Their findings were published Monday in the journal Nature Ecology & Evolution.

Compiling data from 208 studies on 167 species, from both terrestrial and aquatic ecosystems, scientists quantified how human activity impacts the movement of birds, mammals, reptiles, amphibians, fish and arthropods, the authors wrote.

“It is vital we understand the scale of impact that humans have on other animal species,” lead author Dr. Tim Doherty, a wildlife ecologist, told the University of Sydney. “The consequences of changed animal movement can be profound and lead to reduced animal fitness, lower chances of survival, reduced reproductive rates, genetic isolation and even local extinction.”

Human disturbance reduced an animal’s movement, on average, by 37 percent or increased it by 70 percent, the authors wrote in The Conversation.

South Africa’s spotted sand lizard, for example, was found to move more frequently over larger areas than lizards in less disturbed areas. Similarly, moose in Norway were found to increase their home ranges by 84 percent due to military operations, the University of Sydney noted.

While some species increased their movements, others were restricted from human disturbances. Due to forest fragmentation, South America’s Northern bearded saki monkey decreased its home range and movement speeds, The Guardian reported.

Changes in their movement impact more than just the animal’s ability to “find mates, food and shelter, escape predators and competitors, and avoid disturbances and threats,” the authors wrote in The Conversation. These changes also “cascade” throughout ecosystems.

For example, when mountain lions heard human voices, their movements slowed, which increased the distances of rodents in the area, The Guardian reported.

“Animal movement is linked to important ecological processes such as pollination, seed dispersal and soil turnover, so disrupted animal movement can have negative impacts throughout ecosystems,” Doherty told the University of Sydney.

While all human activities can impact animal behavior, the scientists found that hunting and recreation had more of an impact on animals than urbanization and logging, The Guardian reported.

“That most species increase movement in response to disturbance gives an interesting hint regarding the mechanism of anthropogenic pressures beyond the obvious, such as invasive predators, habitat loss or direct exploitation,” professor Corey Bradshaw, director of the Global Ecology Lab at Flinders University in South Australia, told The Guardian.

Although the study confirmed much of what the scientists already knew, their findings can direct policy decisions to address human disturbance and promote conservation. But “where habitat modification is unavoidable,” Doherty added, “we recommend that knowledge of animal movement behaviour informs landscape design and management to ensure animal movement is secured.”

One conservation effort aimed at adapting to animal movement is currently underway in one of the world’s major cities. In the increasingly growing urban environment of Los Angeles, mountain lion populations are split by a major freeway. This causes the populations to experience low genetic diversity and high mortality rates due to human activity, Smithsonian Magazine reported.

In response, the National Wildlife Federation’s #SaveLACougars campaign is in its final stages of developing what may be the largest wildlife crossing in the world, enabling mountain lions and other species to cross California’s 101 freeway safely.