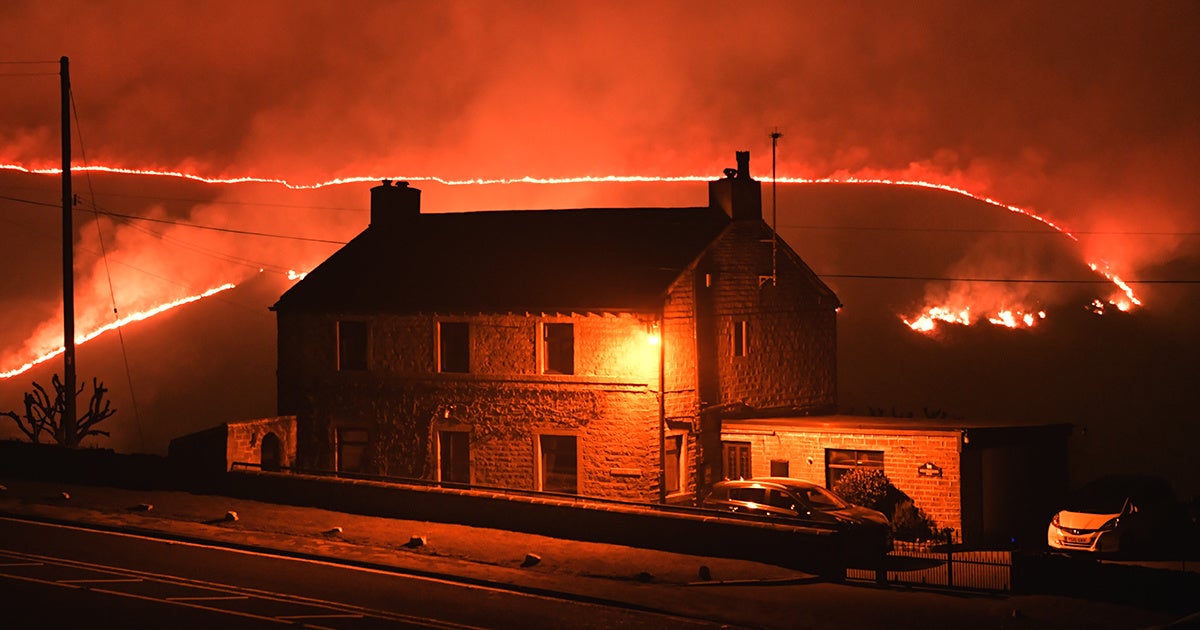 Wildfires broke out across the UK Tuesday as the country experienced its hottest winter day on record. Firefighters battled blazes from Scotland to Wales, including two in the forest that inspired the “Hundred Acre Wood” in A. A. Milne’s Winnie the Pooh books.

Firefighters said the fires in Ashdown Forest in East Sussex were made more likely due to the fact that the ground was drier because of “unusual warm weather this week,” BBC News reported.

D watch were in attendance at the Forest Fire at #AshdownForest today…. great work by all crews 👍🏻👏🏻👏🏻👏🏻🚒🚒🔥🌲🌲 pic.twitter.com/0vZooi0PPq

The twin fires impacted more than 35 hectares of forest, but were brought under control by 5 p.m.

Other blazes across the country ignited for similar reasons.

“Wildfires are not common in February,” Dale Gardiner of the West Yorkshire Fire and Rescue Service said, as The New York Times reported. “And due to the above average weather conditions, this has elevated the wildfire risk across the county.”

The West Yorkshire Fire and Rescue Service responded to a fire on Marsden Moor in northwest England that one witness described as “apocalyptic.”

Crews responded to reports of a fire at 7:51 p.m. Tuesday, according to a statement from the fire service.

“It was one of the of the highest flame fronts we have seen with flames of up to two metres high (approximately 6.5 feet) and it was moving fast across the moorland,” station manager Adam Greenwood said.

A crew of around 30 firefighters worked to control the fire until it died down around 3 a.m. Wednesday, though crews stayed to monitor the situation.

“It was really adverse conditions. We were rotating the crews for their welfare as it’s very physically demanding work,” Greenwood said.

A dramatic picture from the ferocious moorland fire at #MarsdenMoor last night. A round-up with all the latest is here: https://t.co/OUTqCcumpx pic.twitter.com/sejjswoQ4y

In Edinburgh, Scotland, meanwhile, a fire on the famous viewing point Arthur’s Seat was visible from the center of the city, The New York Times reported.

A fire in Glyndyfrdwy, Wales that was still burning Wednesday morning was the only one of the fires to send someone to the hospital, when a man was rescued after being trapped in his tractor by the flames, The New York Times reported.

Scientists spoke to BBC News about why the fires had broken out and exactly how unusual they were.

Winter is a typical time for controlled burns on moorlands in the UK, when it is safe to burn overgrown heather to allow new shoots to grow and create ideal habitat for grouse. But the fires that erupted Tuesday were not controlled.

“Landscape fires in Britain happen disproportionately in the spring, because on the moors and in the forest, you have no leaf cover,” King’s College London professor David Demeritt told BBC News. “Sticks and leaf litter dry out. And because this has been a relatively dry winter, there’s more of that fuel on the ground — everything has dried out early.”

Scientists also agreed that the warmer weather was made more likely by climate change.

“I am very confident to say that there’s an element of climate change in these warm temperatures,” Acting Director of the Environmental Change Institute at Oxford University Dr. Friedericke Otto told BBC News. “But climate change alone is not causing it. You have to have the right weather systems too.”

However, the fires are indicative of what the UK could see more of in the future.

“Climate change predictions suggest that, on average, conditions for wildfires in the U.K. are expected to increase as temperatures rise,” Met Office meteorologist Bonnie Diamond told The New York Times.

We’ll be doing an attribution study on how this week’s record-breaking temperatures were affected by #climatechange A Met Office analysis in 2014 showed that since 2000 there were 10 times as many high temperature records broken as cold temperature ones https://t.co/6cgNBdj7CY pic.twitter.com/1CEaORGsQx

London School of Economics environmental geography researcher Dr. Thomas Smith told BBC News that the early fires had one advantage: since the soil beneath them was still wetter than soil tends to be in the summer, they were less likely to spread and do lasting damage to vegetation and wildlife.

“The fires could even be doing us a favour – burning off overgrowth that may have become fuel for worse fires later in the season,” Smith said.