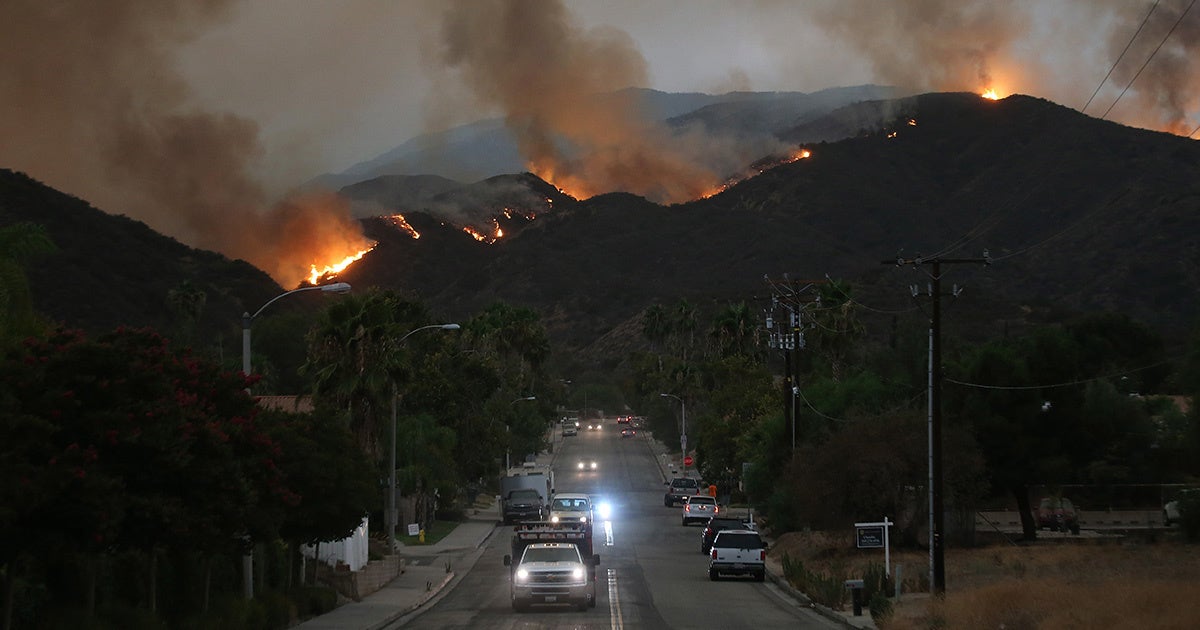 Cars drive down a hill in a mandatory evacuation area as the Holy Fire burns in Cleveland National Forest on Aug. 8 in Lake Elsinore, California. The fire has burned at least 6,200 acres and destroyed twelve structures. Mario Tama / Getty Images

Sharp declines in summer rainfall could be a “primary driver” of the record-breaking wildfires ripping across the western U.S., research shows.

Using satellite data, the study finds that there have been “previously unnoted” declines in summer rainfall across close to a third of forests in the western U.S. over the past four decades. These declines are “strongly correlated” with wildfire increases, the study finds.

It is likely that climate change has played a role in the diminishing rains, the lead author told Carbon Brief. However, it is still not clear to what extent global warming—over natural climate variability—is to blame.

The findings suggest that the role of declining rainfall in worsening wildfires has been previously “overlooked” in comparison to other major drivers such as rising temperatures, the author adds.

California is currently facing its largest wildfires on record. Across the state, more than 332,000 hectares (820,000 acres) of forest have already been scorched—more than twice the area burnt during the same time last year.

Out of the 15 largest wildfires ever recorded in California, 10 have occured since 2000. Across the western U.S., forest fires have become fives times more frequent and six times larger, on average, since the 1970s, research shows.

As Carbon Brief recently explained in a detailed fact check, the chances of a wildfire spreading and becoming large are affected by myriad factors. However, research shows that there is a correlation between rising spring and summer temperatures and the amount of land burned by forest fires in the western U.S. in recent decades.

When temperatures are warmer, rates of evaporation increase—meaning more moisture is drawn out from the land, leaving it dry. A parched land surface creates tinderbox conditions—allowing wildfires to spread more quickly.

The new research, published in the Proceedings of the National Academy of Sciences, pinpoints a second important driver of wildfires—recent declines in summer rainfall.

The findings suggest that such declines could be the main cause of increases in the severity of the wildfire season in recent years, said lead author Dr. Zachary Holden, an ecologist from the U.S. Forest Service in Missoula, Montana. He told Carbon Brief:

“We found that across large areas of the west, there have been significant declines in precipitation during the western fire season. We also found that the length of dry windows—consecutive days without any rain—are becoming longer.”

Declines in rainfall could be affecting the severity of wildfires in two main ways, he said.

First, less rainfall leads to the drying out of vegetation—which can then act as tinder for a spreading fire. Second, long spells without rain cause more sunlight to be converted to heat at the earth’s surface—leading to further drying at the land’s surface. Holden said:

“Overall, we found that reduced precipitation has had a larger impact on historical trends in western wildfire activity than the effects of winter snowpack or air temperatures.”

For the study, the researchers compared temperature and rainfall data taken from weather stations across the western U.S. to forest fire data captured by satellites. The charts below show forest cover (left) and forest wildfire area burnt per year from 1984 to 2015 (right) in the western U.S. 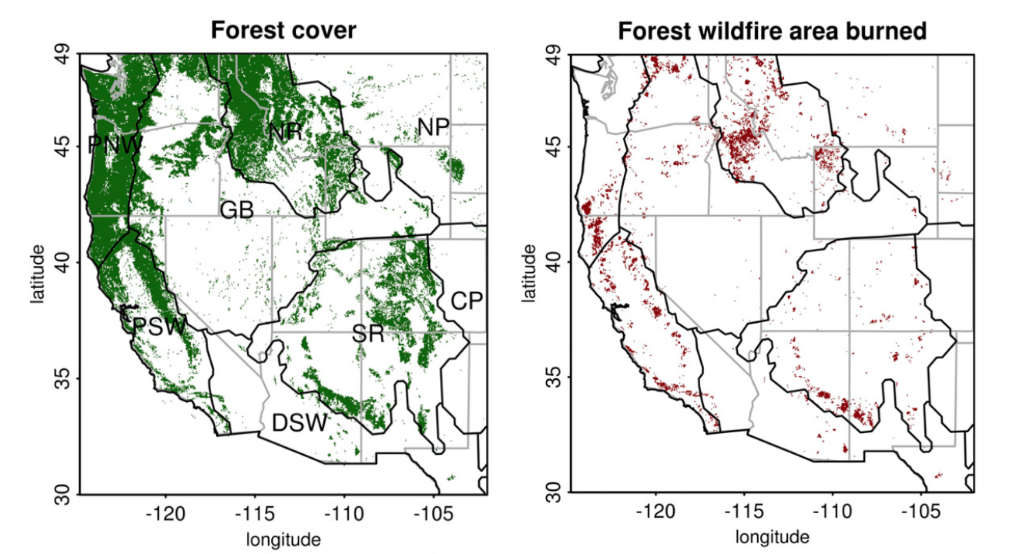 The researchers used this information to explore three hypotheses. The first was that increases in forest fires have primarily been driven by decreases in mountain snowpack.

During the spring and summer, meltwater from accumulated mountain snow provides a key source of water across the state. Because of this, some have suggested that declines in snowpack could be the key driver of the dry conditions that aid the spread of wildfires.

However, the researchers found that declines in snow meltwater were not significantly correlated with the annual area burned by wildfires in the western U.S. over the study period.

Similar to previous studies, the researchers did find a strong correlation between temperature increases and wildfire temperatures across the regions studied.

However, in contrast to the earlier research, the researchers also found an even stronger correlation between declines in summer rainfall and increases in forest fires. They considered “summer” to be from May to September.

The researchers also looked at changes in the number of summer “wetting rain days”—days when rainfall exceeded 2.5mm.

In addition, the researchers found that the average length of dry spells increased in many parts of the western U.S. from one decade to the next.

The maps below show changes to summer rainfall (left), number of rain days (middle) and the average length of time without rain (right) in the western U.S. 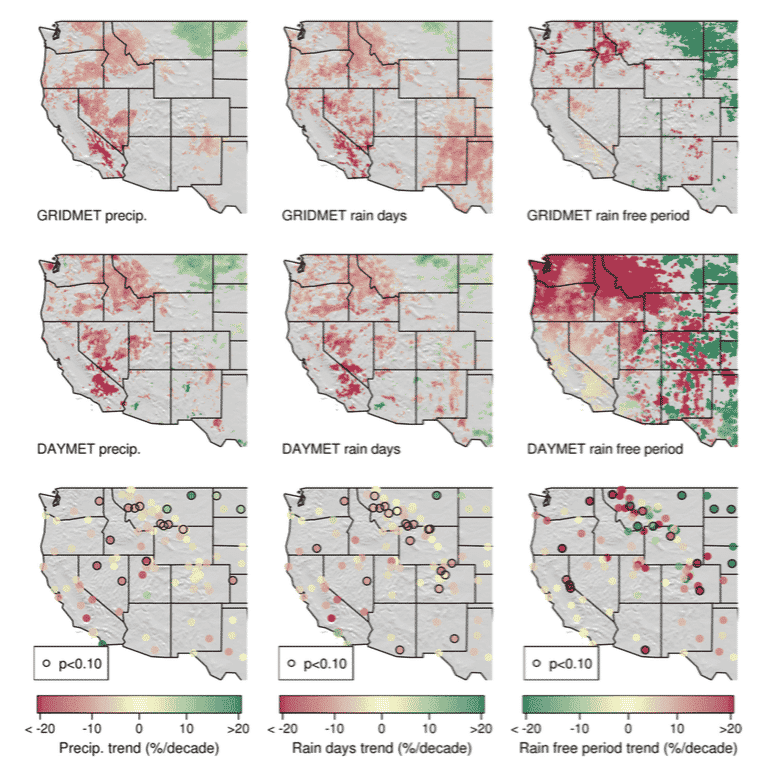 The maps show how regions that have seen the largest wildfire increases, such as the Pacific Northwest and the Northern Rockies, have also experienced declines in summer rainfall and increases in the average length of dry spells over the past four decades.

The chart below show the relationship between the number of wetting days (x axis) and the area of land burned by wildfires from 1984 to 2015 (y axis). 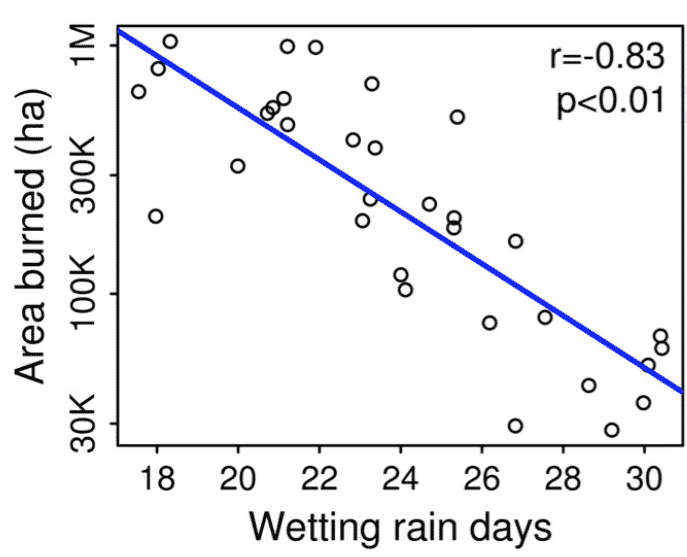 The relationship between the number of “wetting rain days” and area burned by wildfires in the western U.S. from 1984 to 2015Holden et al. (2018)

The chart shows that there is strong correlation between the observed decline in rainy days and the amount of land burned by wildfires, Holden said:

“We don’t know whether long rain-free periods in the west are likely to continue, or increase. Here in western Montana, we’ve just broken the historical record for the longest continuous number of days with no rain. If we see continued summer drying, we expect fire seasons to be as or more severe in the future.”

The study did not aim to separate out the extent to which climate change and natural climate variability are behind the observed summer rainfall declines, Holden said.

However, recent research suggests that the decline in Arctic sea ice extent—in part, caused by climate change—could be contributing to longer summer dry periods, he said.

This is because declines in Arctic sea ice extent could be causing the winds that carry weather systems into the western U.S. to weaken. The slowing of winds allows patterns of weather—such as a dry spell—to persist for longer over one area, Holden said:

The research “adds evidence” to what is known about how climatic factors influence the severity of wildfires in the western U.S., said professor John Abatzoglou, a wildfire researcher from the University of Idaho, who was not involved in the study. He told Carbon Brief:

“Precipitation during the fire season is certainly an important factor as it helps raise fuel moisture and can aid in suppression efforts on active fires. The effect to which anthropogenic climate change is behind declines in summer precipitation in the west is unknown.”

However, the researchers may have overestimated the relative importance of rainfall in comparison to other drivers, such as “atmospheric aridity”—the general dryness of the air, said professor Park Williams, a researcher in climate and ecology from Columbia University, who was also not involved in the study. He told Carbon Brief: