What Wildfires Do to Our Minds 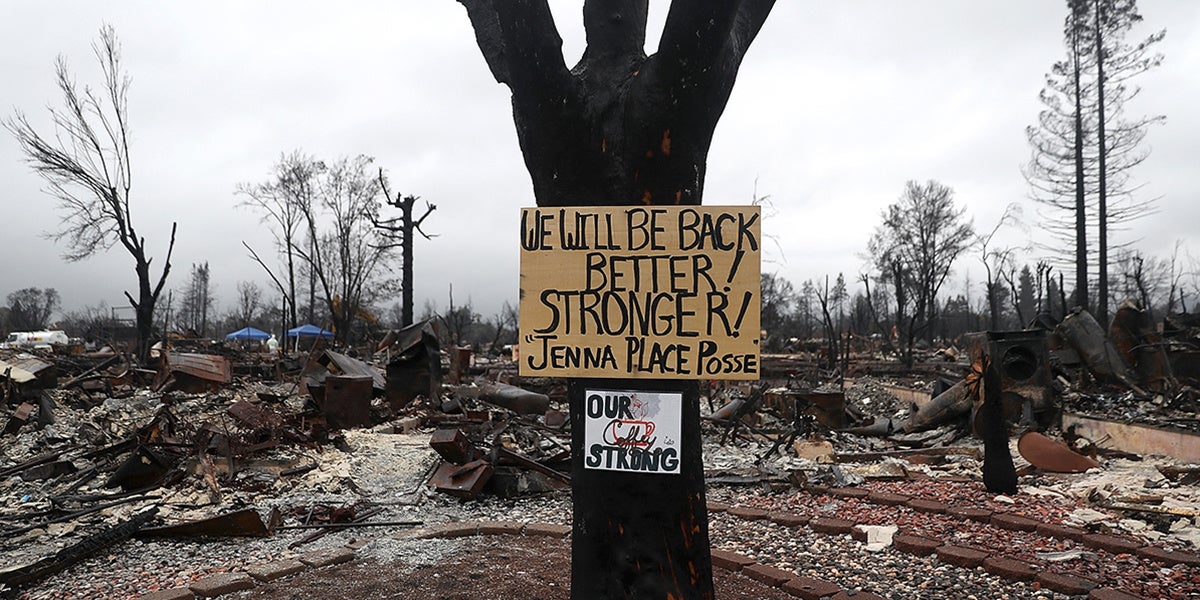 It’s late spring, and I’m hiking Sugarloaf Ridge State Park in Sonoma County with therapist, ecopsychologist, and California naturalist Mary Good. A mist is drifting down, and we have the park mostly to ourselves. In October 2017, 80 percent of Sugarloaf’s 3,900 acres of oak woodlands were scorched by the firestorms in California’s North Bay. But today, most of what stretches out before us is green and vibrant, brushed with the last signs of a wildflower superbloom that erupted from the ash earlier this spring.

A dozen miles west in Santa Rosa, contractors are rebuilding some of the more than 5,000 homes destroyed there. The last of 2.2 million tons of fire debris has been hauled away from the 383 square miles of charred land in the region. And therapists like Good continue seeing fire survivors pro bono, helping them navigate the aftermath of the disaster.

“It was an absolute trauma for everybody involved. The fire is over, but the grief may last a long time,” Good said. “We live in a time where these natural disasters are going to be happening more and more. How do you develop resilience? What do you do to feel like you can be safe in the world again?”

Developing that resilience seems crucial. According to climate research from NASA, we can expect more droughts, stronger and more intense hurricanes, and big changes in precipitation patterns.

As climate change-related disasters become more common, there is a critical need to address the mental health of survivors after a catastrophe. Santa Rosa residents—and the greater Sonoma County community—rushed in to offer support services through pop-up holistic clinics, mental health education, and free counseling services. It’s a response that may help other communities cope with future disasters.

National programs can help address people’s mental health needs during disasters like these fires and in the immediate aftermath, for example, the Disaster Distress Helpline—a confidential, national 24/7 call and text service.

Christian Burgess, the Helpline’s director, says that most calls during disasters are from people feeling overwhelmed and anxious, seeking information about the event.

“During the long term recovery … we start to see deeper mental health concerns from callers and texters, such as persistent anxiety; depression; and substance abuse, which can be related to traumatic exposure during the event; loss of loved ones, including pets; and financial strain,” Burgess said.

Other organizations in Sonoma County took a more grassroots approach to offer support.

Tré Vasquez is a youth organizer at the North Bay Organizing Project, a Santa Rosa-based nonprofit that organizes working-class and minority communities to build political power.

The first event was hosted within days. In the following weeks and months, Sanación del Pueblo provided physical and emotional support, referrals, meals, and donated respirators to nearly 600 people. The events have been hosted at a community garden, a local Unitarian church, and a branch of the Sonoma County Library in a largely working-class and Latinx neighborhood of Santa Rosa. Vasquez says the events are still offered on a quarterly basis and include people of all ages sharing meals or chatting while they wait for their turn at massage tables, counseling sessions, or limpias—traditional Mexican spiritual healings.

According to Vasquez, Sanación del Pueblo centers people who have been historically underserved by medical providers, including undocumented immigrants, women and trans people, those with existing mental health concerns, and others at risk of being left out of emergency response services. 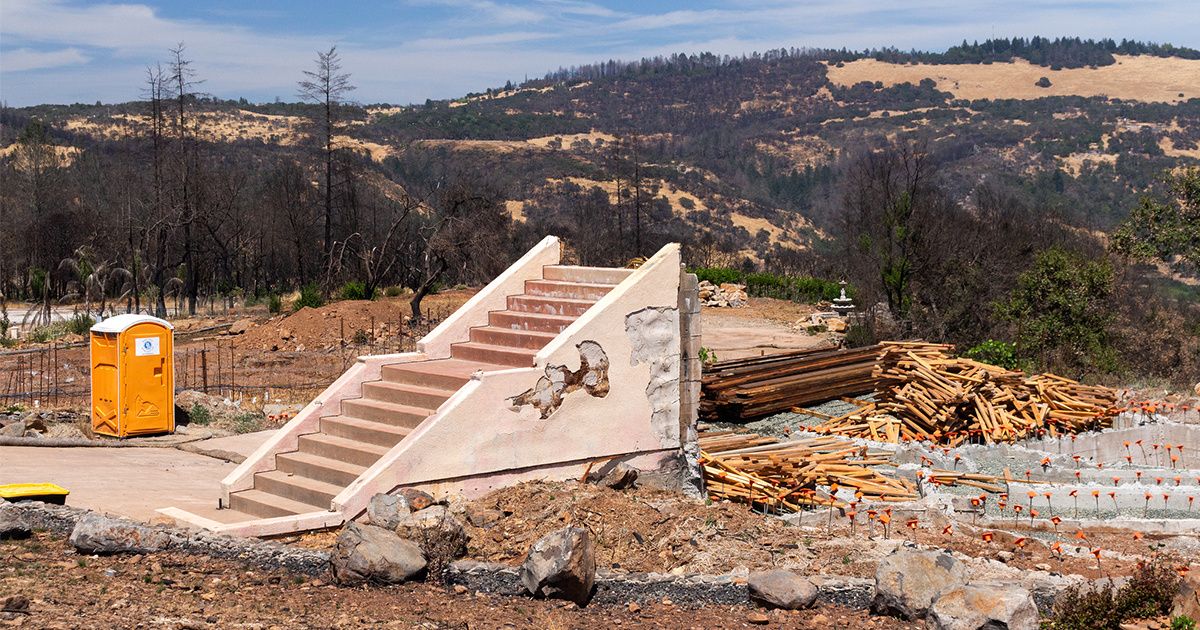 Thomas Pope, Lomi’s co-founder and clinical director, says they have seen about 50 new clients in their fire survivor program. The program offers free and reduced-fee counseling services and was partially funded by the North Bay Fire Fund, which raised more than $32 million in four months after the fires. Pope and his staff of roughly 30 therapists hope to provide services to survivors for as long as they need them.

“What we know is that three months to a year after a disaster is when the most need happens; that’s why we want to keep this going,” Pope said. “I think it’s going to be quite a while until this community finds its way out of this initial stage of shock.”

Pope’s advice to other communities responding to large-scale disasters echoes NBOP’s actions: Create safe places for people to go where they will have connections with others and positive activities to focus on. He says that finding a balance between discussing what happened and engaging in activities that bring pleasure and nourishment is key.

“Looking at disasters and the wide range of traumatic response, it’s really good for our communities to know that there is a huge range of response,” Pope said. “And it’s important to attend to all of it.”

Pope says that providing services as soon as possible should also be prioritized. Immediately after a disaster, people need help navigating resources, calming themselves, and problem-solving—all key aspects of psychological first aid. For survivors, having trauma validated and finding a supportive environment quickly can be critical for long-term well-being.

“And we really need to learn in recovery, to be able to shift attention away from difficult things to what’s working well: love, connection, beauty and joy,” Pope said. “I don’t want to sound callous at all, because in the middle of trauma, we can’t always do that. But in the short range we also need to learn how to get out of the well of despair and find goodness, also. And that’s what we saw in this community: There’s an amazing amount of goodwill and care and love and goodness. That’s part of recovery: being able to allow that support and to internalize the care that is here.”

Throughout Sonoma County, other support networks have surfaced, including free trauma-informed yoga classes, support groups through hospice organizations, brown-bag lunch discussions, presentations on how to recognize and support loved ones with post-traumatic stress disorder, and holistic health care providers offering free services. But as the land regenerates and homes are rebuilt, the traumatic memories and uncertainty of being unhoused remain painful realities for many.

David Leal, a U.S. Navy veteran, utilized many of these services immediately after he and his wife lost their home of 10 years—in the Coffey Park neighborhood of Santa Rosa. He attended a free yoga class for fire survivors three days after the fires started.

“The instructor was very compassionate and offered her support at no cost,” Leal said. “It was my first lesson in receiving help.”

Leal also attended the first Sanación del Pueblo event, where he received a free massage and herbal supplements that he continues using today. He also continues a regular yoga practice and has received free and low-cost acupuncture and herbal supplements that have helped him immensely with the service-related PTSD that was reignited after losing his home.

“The fire triggered a lot of old stuff that I had experienced all the way back to childhood. The greatest challenge has been loss of sleep due to dreams and nightmares of so many different painful episodes from my past,” Leal said. “But between yoga practice and chats with my Navy psych friend—and the herbs—I’ve been able to recover from the sleepless nights.”

He says that the early support has helped him to be calm, especially as he deals with the stress and red tape of rebuilding his home.

“We have a moment right now that’s really calling upon us to figure out how we’re going to return to living in a good and balanced way,” Vasquez said. “We can create spaces in which the way that we care for each other is a glimpse into the world as it should be. Or as we hope for it to be, as we mean for it to be.”

Back at Sugarloaf Ridge, Good says that community training and planning before disaster strikes is a must as communities look toward adapting to the new normal of climate catastrophes. She says that connecting with nature, even after a disaster of this scale, is critical, recounting stories of fire survivors regaining hope when the scorched land showed signs of regrowth. Yet she acknowledges that survivors face long roads to recovery.

“Putting an entire life back together—it just stops people in their tracks,” Good said. “Where do you even begin? How do you pick a point and start?”

The light rain is letting up at the park, and Good is excited about showing me a large bay tree that was badly damaged by The Nuns Fire. A hole has been burned through its trunk, but there is new growth sprouting around its blackened base, and leaves are springing out from its branches.

“It’s such an amazing example of how you can be burned through to your core both literally and metaphorically, and even after being burned through to the core, [the tree] still leafed out this spring,” she said. “It’s a great example of individual and community regeneration.”