Strong Winds Spark More Than a Dozen LA-Area Wildfires, Including a Blaze Near Reagan Presidential Library 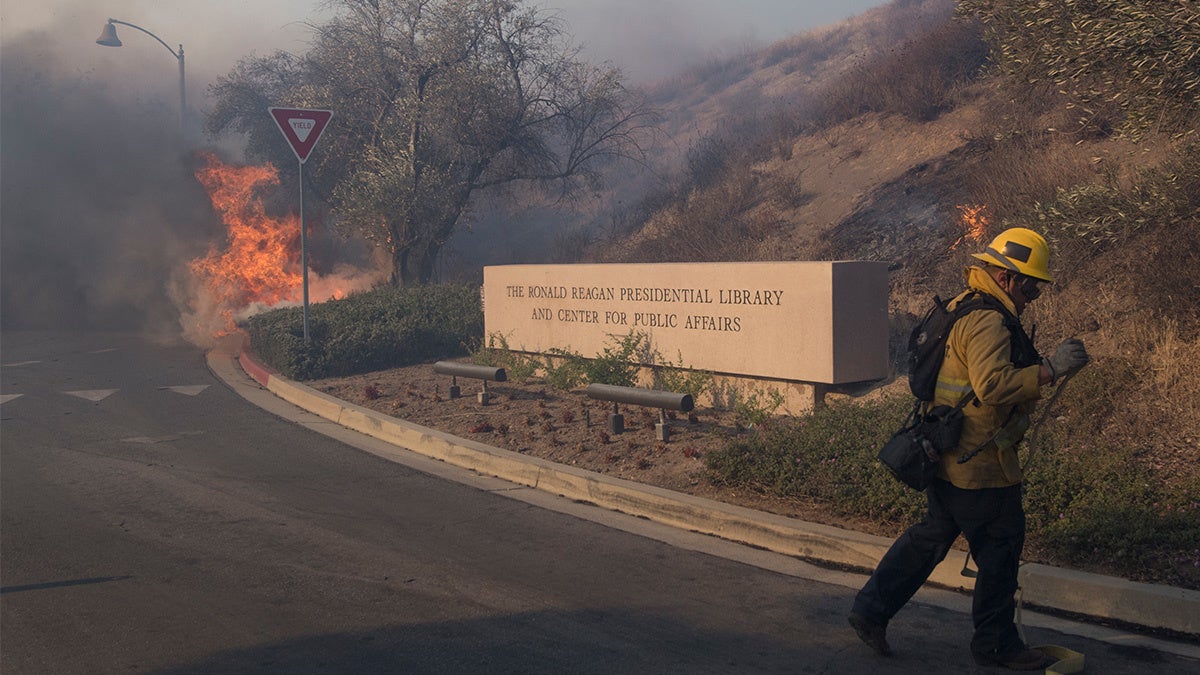 “I don’t know if I’ve ever seen us use this warning,” forecaster Marc Chenard said.

The new fires come as California has been battling wind-driven blazes and enduring preventative power outages for about a week. While wildfires are natural in the state, the California Department of Forestry and Fire Protection says the fire season has gotten longer because of the climate crisis.

One of Wednesday’s fires, the Easy Fire, tripled in three hours and threatened the Ronald Reagan Presidential Library. It was driven by almost hurricane-force gusts of more than 74 miles per hour, according to BBC News.

That fire sparked in Simi Valley at around 6 a.m. and spread to at least 1,648 acres, ABC 7 reported. It threatened 6,500 homes and destroyed one structure, prompting evacuation orders for around 30,000 people.

Ventura County Fire Chief Mark Lorenzen said that firefighters were making progress, but that the fight was not over yet.

“We still are not through this,” he said at a 6 p.m Wednesday update reported by ABC 7. “We have another 24 hours of significant weather conditions and a lot of threat. Please stay aware, stay tuned and always be ready with a plan.”

At one point Wednesday, the blaze menaced the Ronald Reagan Presidential Library, surrounding the 1,300 acre complex, CNN reported. John Heubusch, the library’s executive director, said a fire had never come so close before.

Firefighters dropped liquid from the air and fought the fire from the ground, but they also had an unlikely ally: goats. A herd of up to 500 ate vegetation that otherwise would have fueled the fire.

“One of the firefighters mentioned that they do believe the goats’ fire line helped them fight this fire,” library spokeswoman Melissa Giller said, as CNN reported. “They just proved today how useful they really are.”

The Easy Fire wasn’t the only blaze to erupt Wednesday, according to The Guardian.

The Hill Fire broke out in Riverside County around 11 a.m. and another fire ignited near Fullerton in Orange County.

The Getty Fire, which ignited Monday, has burned 745 acres and destroyed 12 structures. It is now 27 percent contained.

Meanwhile, in Northern California, firefighters finally began to make progress on the Kincade Fire, which has burned through 76,825 acres and forced nearly 200,000 people to evacuate, BBC News reported. However, the Sonoma County Sheriff has finally lifted the evacuation order for much of the area, according to The Guardian, and the fire is now 30 percent contained.

“Thank you for your patience, for your understanding,” PG&E Corp. CEO Bill Johnson said at an evening press conference reported by the San Francisco Chronicle. “Let’s all hope we can get back to normal soon, and stay that way for a long while.”

Correction: An earlier version of this article said that the Getty Fire ignited Tuesday. It has been corrected to reflect that fact that it ignited Monday.