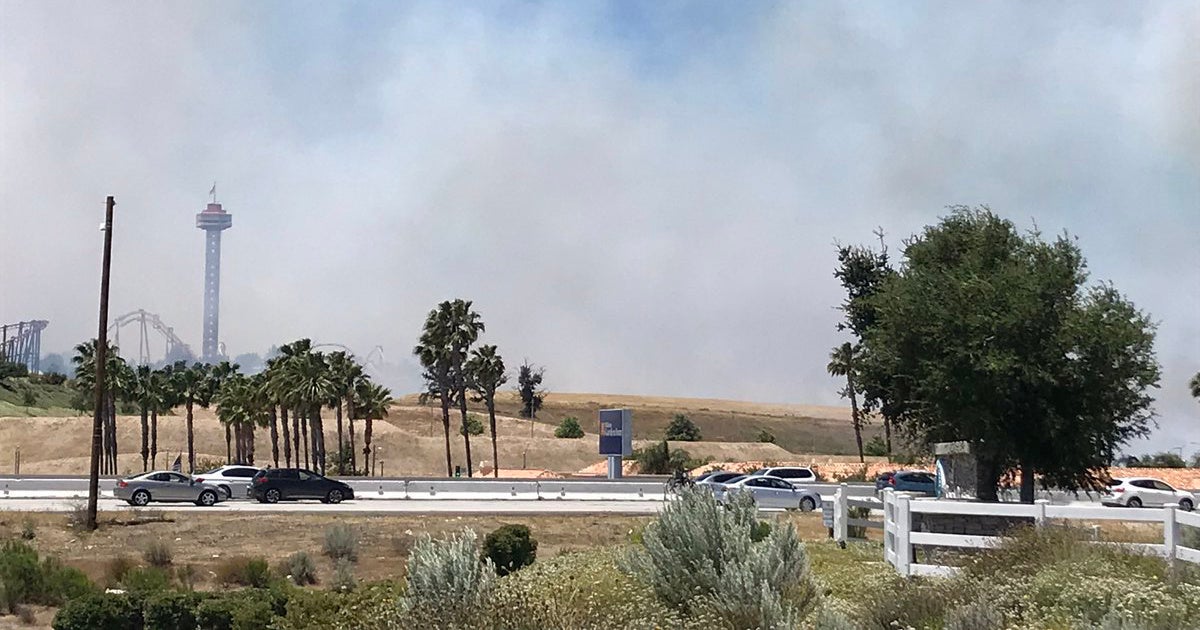 “I was getting iced coffee and when I walked outside, ash was raining down on me,” Rachel Gallat, who was visiting a friend who works at the park, told The Associated Press of the experience. “There was a big cloud of smoke. I saw people around me panicking; they didn’t know where they were supposed to go.”

Climate change has driven an increase in the severity and frequency of fires in the Western U.S., extended the fire season in some areas and nearly doubled the amount of land burned in the last 35 years, according to the Union of Concerned Scientists.

Sunday’s evacuations came after the Sky Fire ignited around noon near Valencia, California, sending smoke into the sky that made the air near the amusement parks unsafe to breathe, according to NBC News. Magic Mountain is the nation’s 14th busiest amusement park and averages 9,200 visitors a day. Hundreds headed to the exit following the evacuation order, The Associated Press reported.

“Six Flags Magic Mountain and Hurricane Harbor are currently being evacuated due to the Sky Incident brush fire. The safety and well being of our guests and team members is our top priority,” the parks’ management said at about 12:30 p.m., as NBC News reported.

Six Flags Magic Mountain and Hurricane Harbor are currently being evacuated due to the Sky Incident brush fire. The safety and well being of our guests and team members is our top priority.

Firefighters had the fire 50 percent contained as of 9:30 p.m. Sunday, The Los Angeles Times reported. It had burned 40 acres and sent nine people to the hospital due to smoke exposure. No structures were damaged.

The Los Angeles County Fire Department did not order the park evacuations.

“Magic Mountain is evacuating, but they are doing it on their own,” supervising dispatcher Melanie Flores told The Los Angeles Times. “We did not tell them to do this.”

Fire officials actually told park guests to shelter in place about half an hour after the initial evacuation order because of road closures blocking the park exit, The Associated Press reported. Guests were told to wait in the back of the property while firefighters attacked the fire near the front.

LA County fire has asked all guests to remain at the park. The exit roads are temporarily closed. We will advise when they open.

Shalane Gonzales, a 34-year-old park visitor, was directed back to the parking lot when she tried to pick up her partner and two sons at the entrance.

“The fire was feet away from where we were,” she told The Associated Press.

Once the roads were reopened, the park closed for the day. It should reopen Monday at 10:30 a.m., The Los Angeles Times reported.

The outbreak of the fire coincided with the first summer heat wave in southern California.

Very warm temperatures on track today for the mountains, valleys, and deserts due to gusty offshore winds. Highs expected to climb well into the 90s across these areas. #LAheat #LAWeather #cawx #Socal pic.twitter.com/MILvgzjstG

“Temperatures at Magic Mountain were between 93 and 96,” National Weather Service in Oxnard meteorologist Kathy Hoxsie told The Los Angeles Times. “Overall, we’re looking at 10 percent humidity, gusts up to 35 mph in some places, and temperatures up 10 degrees from yesterday — so, we’re definitely hitting critical fire conditions.”