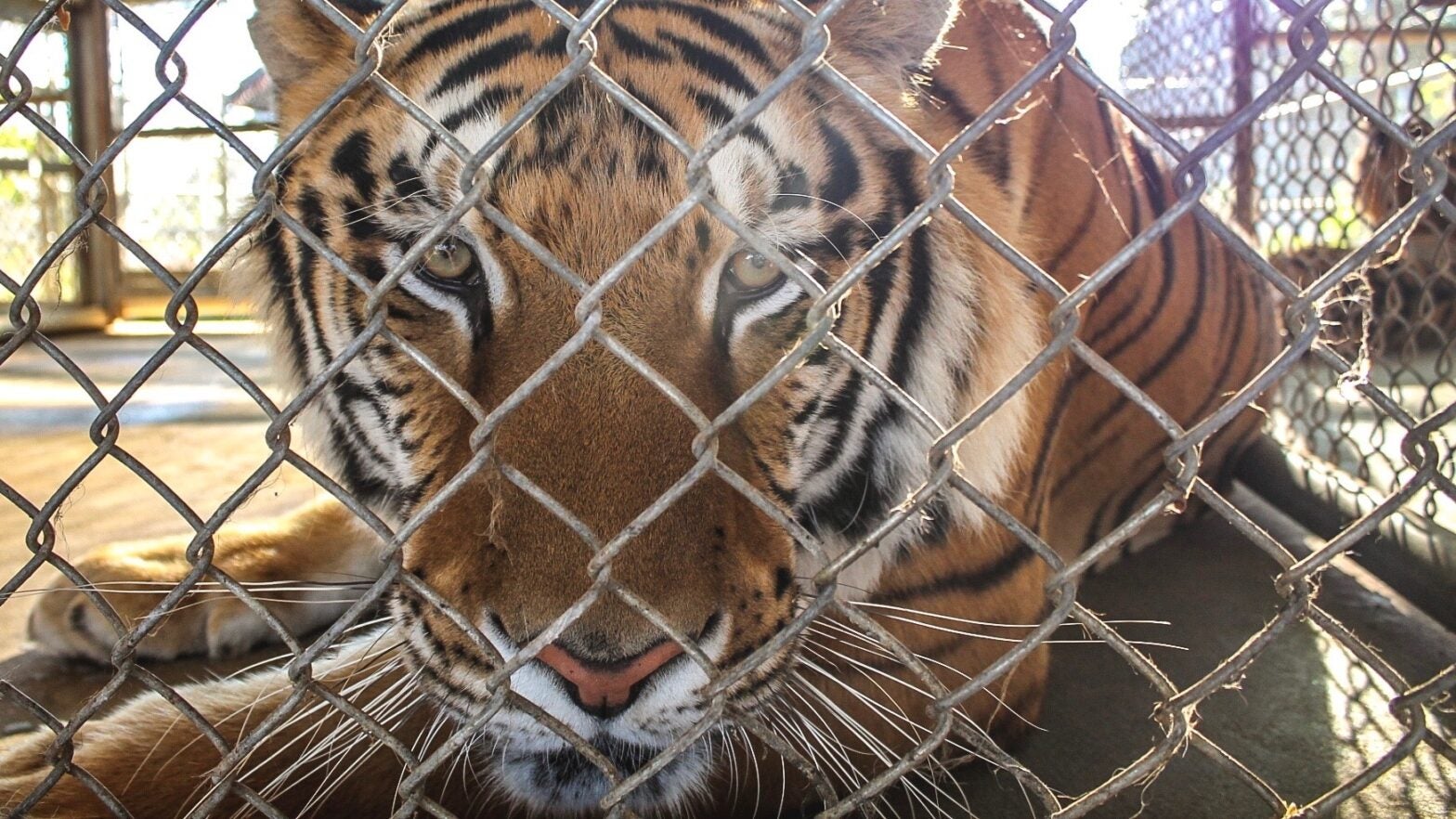 A tiger looks out from its cage at a new resort and zoo in the eastern Lao town of Tha Bak on Dec. 5, 2018. Karl Ammann believes the "zoo" is really a front for selling tigers. Terrence McCoy / The Washington Post / Getty Images

Are tigers extinct in Laos?

That’s the conclusion of a detailed new study that found no evidence wild tigers still exist in the country.

What researchers did find during a five-year camera survey of the biodiversity-rich Nam Et-Phou Louey National Protected Area was evidence of snares — lots and lots of deadly snares, which are designed to trap and kill any animals that stumble across them.

It appears that tigers have now paid the ultimate price for the snaring crisis that plagues Laos and the rest of Southeast Asia.

“Snares are simple to make,” said Akchousanh Rasphone, a zoologist with the Wildlife Research Conservation Unit and lead author of the study. “One person can set hundreds or even thousands of snares, which kill indiscriminately and are inhumane for anything that is captured.” Most animals killed in snares are destined for Asia’s bushmeat markets, although tigers themselves are sought by wildlife traffickers for their valuable furs and body parts. 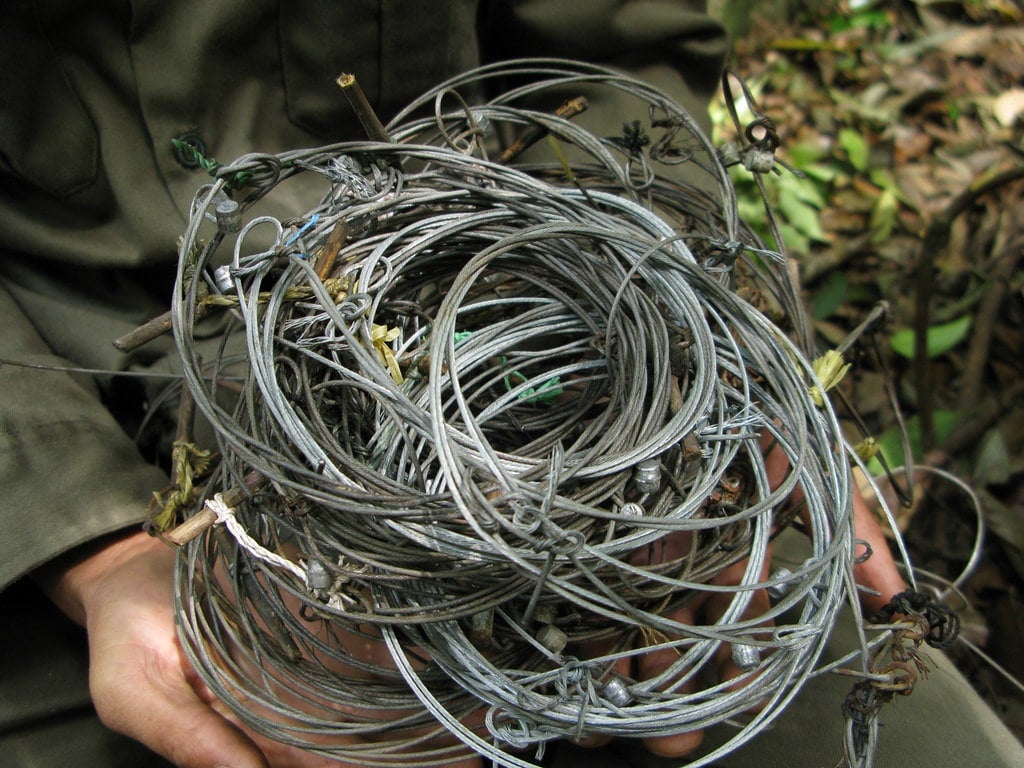 The loss of tigers in Laos was an avoidable, if not unexpected, tragedy. The most recent worldwide tiger population estimates, released in April 2016, put the number of tigers remaining in the country at all of two. The observation of those last two Laotian tigers came from the first year of the camera survey; they were never seen again — except, in all likelihood, by the trappers who killed them.

“Our team did what we could with our limited resources to conserve the species,” said Rasphone. “We did our best despite being defeated by the high international demand in the illegal wildlife trade for this species.”

Their deaths continue the slow decline of the Indochinese tiger (Panthera tigris tigris). Today their only healthy populations remain in Thailand, which at last count had about 189 wild tigers. The Indochinese tiger (previously considered its own subspecies) also persists at unsustainable levels in China (about 7 tigers), Vietnam (fewer than 5) and Myanmar (no reliable population count).

Unfortunately, the news of tigers’ extirpation in Laos hasn’t generated much attention in the country.

“It seemed to spark very little discussion in Laos in terms of how to move things forward with regards to preventing extirpation of more species,” said Rasphone. “It occurs to me that the only thing that our government was concerned about was that the study made the country lose face, instead of taking it as a lessons learned and thinking about how not to repeat the same mistakes again for the species of conservation importance that are left.”

And that’s a big concern, as snaring affects a lot more than just tigers. The researchers also concluded that leopards (Panthera pardus) no longer exist in Laos. The species was last officially observed in the country in 2004, but conservationists had hoped that pocket populations remained in Nam Et-Phou Louey.

In addition, the researchers identified a wide range of large and small animals in snaring hotspots in Nam Et-Phou Louey, including other predators such as dhole (Cuon alpinus) and clouded leopards (Neofelis nebulosi), and all appeared to have declining populations. “Based on our recent survey, the largest prey species, guar (Bos gaurus), has already become quite rare,” said Rasphone.

So is that it for tigers in Laos? Not necessarily. In theory, if the snaring crisis is ever resolved, the big cats could repopulate Laos from neighboring countries.

And Rasphone said her team still conducts surveys to find evidence “of what is and isn’t there.” She adds that the government wants additional surveys for both tigers and leopards, “although there isn’t funding for that at the moment.”

It should also be noted that captive tigers do still exist in Laos. Hundreds of genetically inbred big cats live in the country’s illegal and notoriously inhumane tiger farms, where they’re raised to be slaughtered and sold for their body parts. Laos has officially promised to shut down these facilities, which have been widely linked to illegal tiger trade, but appears to have made little progress toward that purported goal. In fact, evidence suggests that the Laotian government has actually allowed existing farms to expand and the number of farms to increase.

The state of the country’s wild animals remains dire, and Rasphone said her team’s study should serve to guide policy in Laos and other nations that still have tiger populations. “In my opinion,” she said, “the message of the paper needs to be carried as a lesson to other range countries and also be interpreted locally for the conservation of the remaining populations of species of conservation importance in Laos.”

With many experts calling the snaring epidemic an “extinction crisis” for Southeast Asia, the time to heed those lessons grows short.