Wild Places Destroyed in the Name of Progress 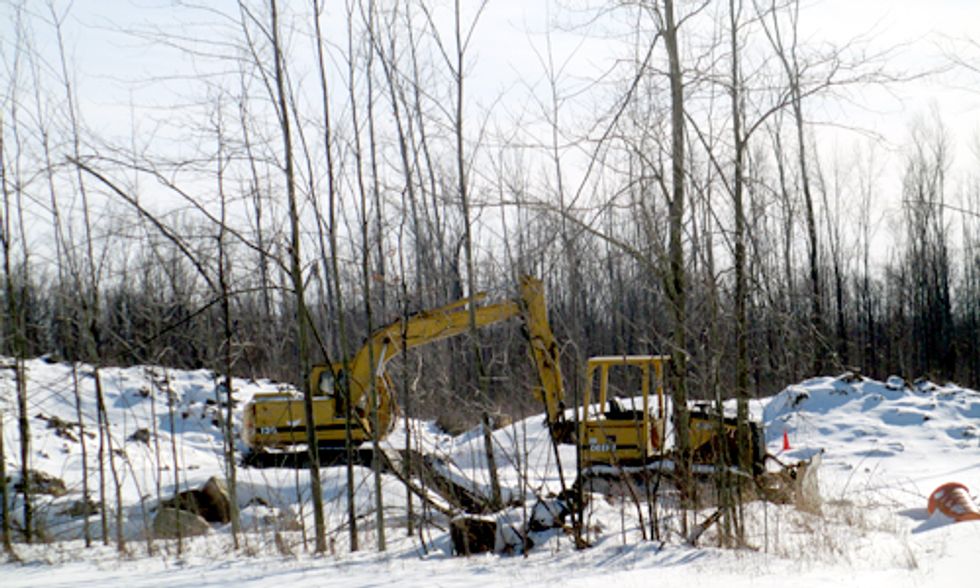 There's a wild place at the end of my street inside the city limits. Sixty acres of very big pin oaks, wild cherry, basswood, some old agricultural fields reverting back to wetlands and forest and an ancient fencerow of swamp white oaks that may be remnants of the original wilderness.

There are a few small ponds, too, that formed after sandstone quarrying a very long time ago. It's a great place to watch red foxes, hear frogs, wild turkey and wood thrushes singing in the spring, and escape the built environment. Generations of kids, and adults, have used it as a defacto park. Several years ago the city of Elyria, OH commissioned a study that recommended the wild spot be protected as a park, and then, the 3M Corporation bought it.

For a few years we all continued to enjoy our wild spot. But, the big trees were marked with a slash of spray paint last month and 3M decided to log it.

It's places like these that are the inspiration for a local kid to one day pursue a career in field biology and later landscape architecture. That kid was me, and now I've come home and can speak for this wild spot, and tell you why this isn't just another local issue of economic development at any cost.

This wild spot has links to regional, national and even international concerns and its potential loss is part of a cascading series of events that affect everyone, everywhere. Deforestation has been growing at an alarming rate here, and across the Midwest, as farmers are eliminating their woodlots for more corn production. As the economy tightens, many landowners are also logging to earn some fast cash. Several thousand acres of forest and wetland have been destroyed in this three county area in just the last year.

A closed canopy forest reflects and absorbs sunlight and prevents much of it from reaching the ground. This in turn has a modulating effect on local climate, cooling it and slowly releasing moisture back into the atmosphere as trees transpire water. A mature forest is like a big sponge, soaking up rainfall and storing it for slow release. A mature forest captures and stores carbon more efficiently. When forests and wetlands are destroyed flash floods result. Our local climate gets hotter and drier and costs associated with cooling buildings in the summer increase, damage from flooding increases and when you start adding local climates together, one soon reaches global climate change.

Biodiversity declines in forests that have been logged. When the eastern hardwood forest was wilderness and one continuous tract from the Atlantic to the Mississippi tornadoes would regularly level large areas of trees. The forest had a mechanism for reclaiming these disturbance sites as quickly as possible. Species eliminated in the disturbance could recolonize from surrounding undisturbed forest. Today, we have a fragmented landscape with patches of trees like islands, surrounded by a biological desert. Re-colonization is often not possible for many species of insects, amphibians, reptiles, plants and a host of other organisms. Each island has become an important reservoir of life.

We are in the midst of several ecological plagues. Ash trees are being completely eliminated by the emerald ash borer. Bat populations are dying out due to white nose disease and native arrow-wood and cranberry viburnum shrubs are also disappearing because of the viburnum leaf beetle. These viburnums were once part of the original forest's plant species that rushed into disturbed areas. They will no longer be available to perform that function. What that means now is that when a forest is logged it will be colonized by non-native invasive plants. These plants evolved in distant ecosystems and do not host our native insects which in turn causes a crash in insect diversity and the birds and animals that depend on them for food, and the other plant species that depend on them as pollinators.

Bats roost in mature trees and are the chief predator of mosquitoes. One little brown bat can consume up to 3,000 in a single night. Yet another plague is the West Nile virus-carried by mosquitoes. Human and livestock deaths from this infection are on the rise. 3M will tell you that they are actually "improving wildlife habitat" by logging. What they refer to is that white-tailed deer numbers increase in these types of edge habitats. Deer populations have skyrocketed across the country, especially in urban areas and they have denuded many woodlands of native plants that in turn once supported an entire web of biodiversity. Pollinating insects and ground nesting birds are especially hard hit. The ecosystem doesn't need more deer.

Neotropical birds are species that breed here and migrate to the tropics for the winter. Some go as far as South America. These birds are in serious decline throughout their range. The National Audubon Society recently released information that 25 percent of neotropical forest bird species are showing significant decline. The wood thrush that sings in our wild spot is a neotropical migrant.

Jared Diamond wrote a book called, Collapse-Why Civilizations Choose to Fail. He describes the predictable process that every civilization that has yet appeared has followed to its ultimate demise. Deforestation and ecological degradation are precursors to a civilizations failure. He also writes about the problem of "Distant Managers," people who make decisions from a distance that have no responsibility for, or stake in, the aftermath of that decision.

Big Oil drilling in the Amazon and leaving contaminated water, ruined villages/landscapes and ecological catastrophe are an example. So is the 3M Corporation in Elyria, OH. They will tell you about being a "good neighbor," and make the desire for a quick profit sound pretty benign through the rhetoric of their hired logger, but when pressed, simply resort to the adolescent attitude of "it’s our land and we'll do whatever we want." Many of us own land within the city limits and we can't just do whatever we want with it, and niether should 3M. We are fighting for our wild place. If you have a similar story to tell other wild place being destroyed, we'd like to hear about it by commenting below.