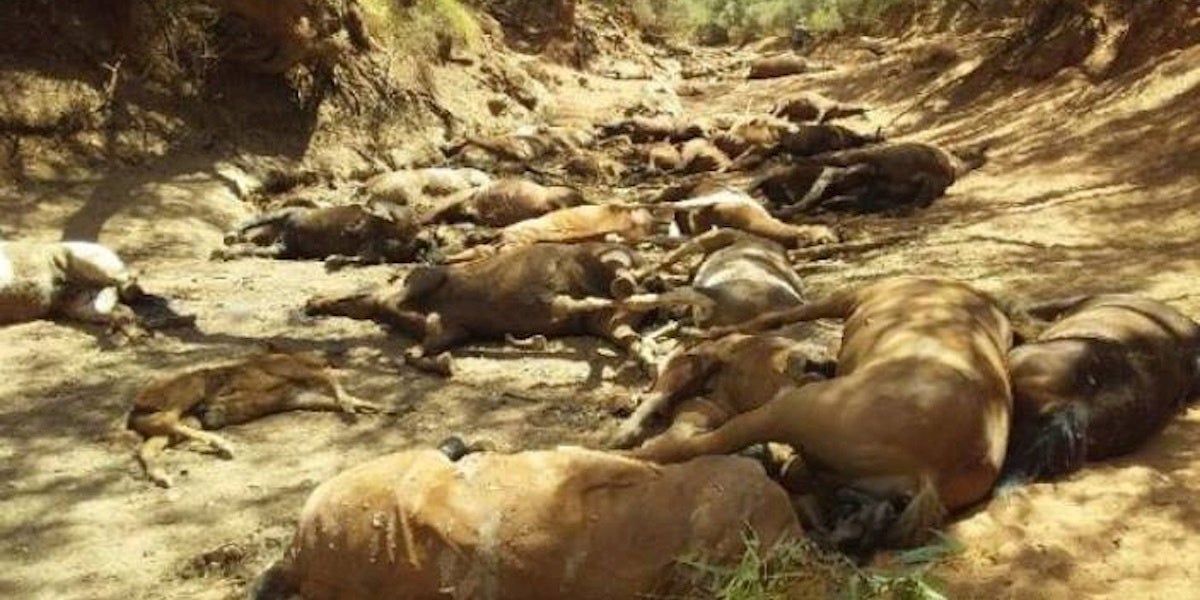 The decomposing horses were strewn along a 100-meter stretch by a dried-up waterhole called the “Deep Hole” near the remote community of Santa Teresa in Australia’s Northern Territory.

It’s not yet clear why the animals died, but locals have tied the grisly incident to the region’s sweltering heat wave.

“The family of wild horses, including Orreea (Stallions), Marla (Mares), and Ambaa-Agooga (Foals) are likely to have perished from dehydration accompanied by the overwhelming heat,” according to a Facebook post from the neighboring town of Alice Springs.

“The prospect of any living creatures perishing in this way has left many locals devastated. All feral animals need to be managed with effective strategies to minimize their impact on the environment and to alleviate any suffering,” the post continued.

Artist Ralph Turner, whose photos are published on the Facebook post, came across the shocking scene last week while investigating how the pool’s water levels were affected by the heat.

“We found all these poor horses, all perished,” Turner told ABC. “We’ve been having hot weather, day after day.”

“I just couldn’t believe something like that happened out here, first time it happened like that,” he added.

Australia is currently melting in a record-breaking heat wave. In South Australia, large colonies of heat-stressed bats and pups are literally falling out of trees. In New South Wales, more than a a million fish have died this month alone. The cause of the fish deaths is not yet known, but experts have pointed fingers at drought, climate change and mismanagement.

“This event, along with other recent instances of mass animal deaths, including recent fish deaths in the Riverina calls the community to wonder what steps are our leaders taking to tackle the effects of climate change in the future and what steps call we all take to prevent the suffering of innocent animals across our country,” the Alice Springs Facebook post concluded.