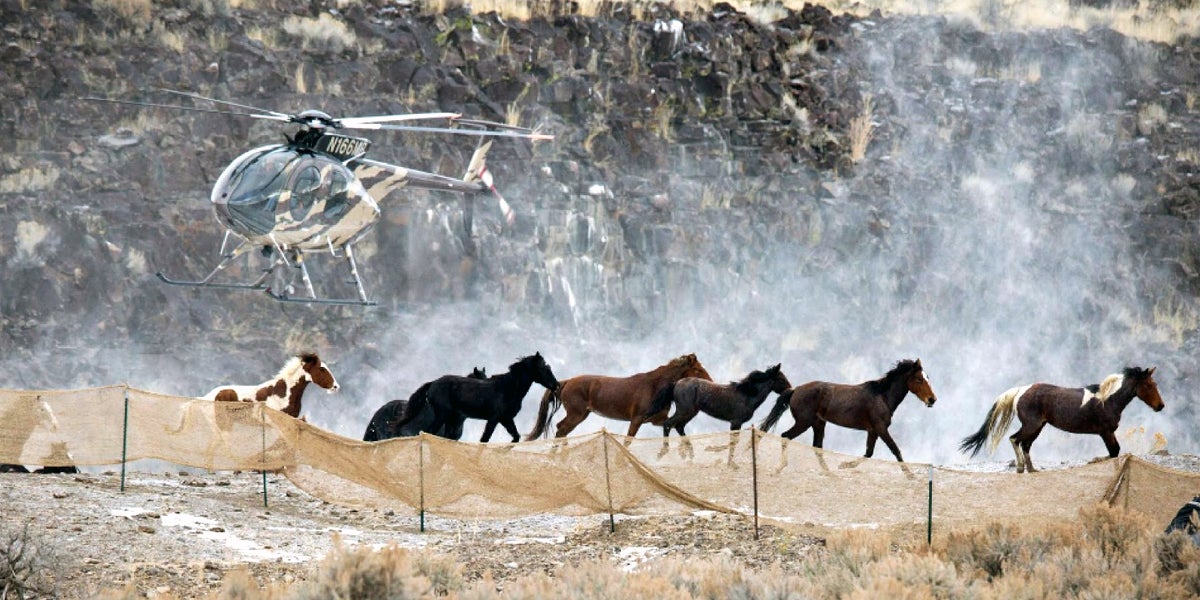 America has two long-standing symbols for freedom: the bald eagle and the wild mustang.

Wild horses are protected by a special law, which was unanimously passed by Congress in 1971 and designates mustangs as “living symbols of the historic and pioneer spirit of the West” who “enrich the lives of the American people.” You’ve seen these majestic wild horses in TV or magazine ads, running unbridled across the open range, dust in their wake. They evoke the boundless West and our nation’s pioneer spirit.

What you don’t see is the helicopters chasing them.

Roundups sound romantic, but in the case of mustangs, the process is cruel and brutal. Despite federal protection, the horses are treated like pests on their native range because, it turns out, the West isn’t that open after all.

Unlike eagles, who enjoy the advantage of an open sky, there’s competition for the land on which mustangs roam. Mostly from ranchers, who view these wild horses as competition for cheap, taxpayer-subsidized grazing on public lands. The U.S. Bureau of Land Management (BLM) is in charge of managing wild horses on federal land. They do so with the notion, bolstered by private interests who have their own ideas for the real estate, that there are too many horses on the range. So they round them up.

The roundups start with the helicopters, which swoop down and terrorize the animals, chasing them to awaiting corrals. The pursuit is dangerous and terrifying. Many horses are injured and some die.

Here are some documented incidents from a recent BLM roundup in the Cedar Mountain Herd Management in Utah:

It’s troubling to read about and even more disturbing to see. More than 350,000 people have viewed videos of the roundup posted by the American Wild Horse Campaign in February. This is one of them:

These roundups are just the tip of the iceberg when it comes to wild horse suffering and death. Records obtained by the American Wild Horse Campaign through the Freedom of Information Act show dozens of horses dying after roundups in Nevada and Wyoming in the days, weeks and months after capture. Causes of death include traumatic injuries such as broken necks, sustained when terrified horses crash into fences and gates. Other horses are just found dead in their pens, some painfully perish from colic and others just “fail to thrive.” Pregnant mares stampeded by helicopters often abort their foals after capture and some die in the process.

The roundups deprive wild horses of the two things they value most: their freedom and their families. Wild horses live in tight-knit social groups, but once they hit the trap, they never see their families again. Mares are forcibly separated from their stallions; foals are torn from their mothers’ sides.

But perhaps the cruelest part of the roundups is that they don’t work. According to the 2013 report, Using Science to Improve the BLM Wild Horse and Burro Program, by the National Academy of Sciences, removing horses from the range just encourages the remaining horses to breed more. So the BLM is actually creating the very problem it complains about.

Yet, the roundups continue even though the BLM doesn’t know what to do with the horses it removes from the range. Some mustangs find new homes through a federal adoption program, but thousands more live out their lives in government holding corrals and pastures. The government now warehouses more than 46,000 wild horses in holding facilities.

The entire failing system costs U.S. taxpayers almost $80 million each year and that amount is growing. Entities from the National Academy of Sciences to the Government Accountability Office to the BLM itself warn that the status quo is unsustainable and yet it promises of reform fade away with each administration.

More humane and effective options exist. In its 2013 report, the National Academy of Sciences also noted that the “appropriate management levels” that BLM uses to justify roundups have no foundation in science. A federal court of appeals last year concurred, noting that the U.S. Wild Horse and Burro Act doesn’t define these levels and there’s no basis in statute for using them to remove mustangs from their homes.

Wild horses and burros are present on just 17 percent of BLM land grazed by livestock. There’s room on the range for these iconic animals and the majority of Americans support preserving them on federal land. Americans are also overwhelmingly opposed to horse slaughter, the preferred management option of the special interest livestock lobby.

We need to decide on fair and sustainable population levels for wild horses. Then they can be humanely managed with birth control vaccine known as PZP, as recommended in the National Academy of Sciences report. Science and the public support this option and it’s readily available. Best of all, it also preserves the animals’ natural behaviors, the very essence of what makes them wild and distinguish them from their domestic counterparts.

Currently, the BLM spends less than one percent of its $80 million annual budget on this option. It can do much more. Both wild horses and taxpayers will benefit.

Last year, the National Advisory Board for Wild Horses and Burros, which ironically is dominated by livestock interests, recommended slaughtering wild horses. The suggestion was met with immediate public outrage and the BLM backed down.

But with a new president and a new Secretary of the Interior on the way, the future of these cherished animals is far from certain.

Will the cruel and costly practice of roundups continue? Or will they be replaced with something worse? Possibilities include dangerous and invasive sterilization surgeries, killing off all the mustangs in federal holding to make room for more and even shipping wild horses to foreign slaughterhouses.

The Trump administration provided a clue to how it will answer those questions in response to an ABC investigative reporter, stating that it had no intention of following the advisory board’s recommendation to slaughter 46,000 wild horses and burros.

But the threat of slaughter grows daily as states like Utah lobby to take over wild horse management by “harvesting” them as a “protein source.”

Speak Up to Save Our Mustangs

This administration and Congress will literally determine the fate of America’s wild horses and burros.

If we don’t tell them now to choose the better way for horses, they may choose the worst way instead. Speak up by signing this petition and learn more about how to get involved.