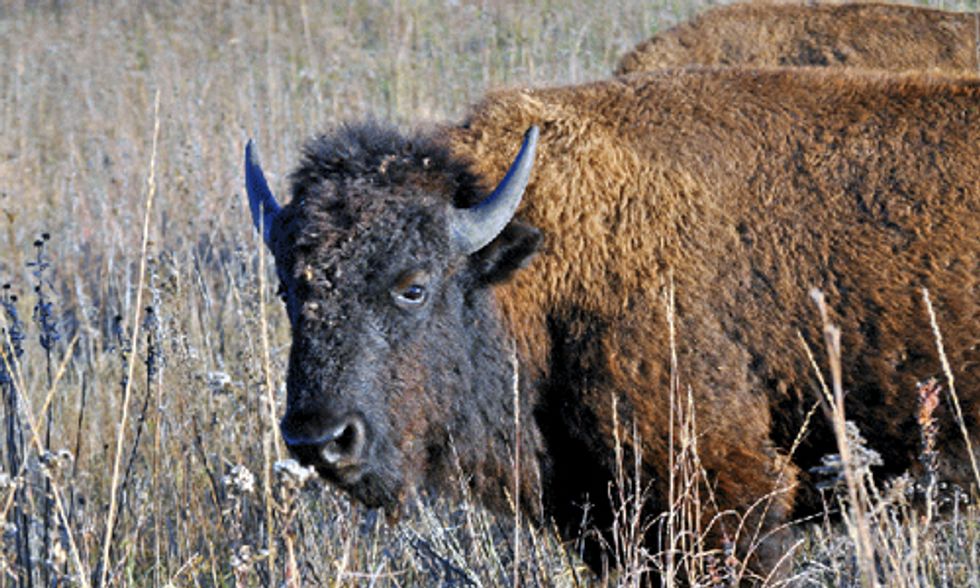 When David Crites walked out of his apartment last month, he was greeted by a line of six or so bison standing shoulder to shoulder in the front yard. He sidled over to his truck, staring at the huge animals, slipped into the front seat, then closed the door and turned on the ignition. As the pickup slowly made its way down the driveway, the bison lumbered alongside.

Despite the project’s success, the land will never be what it was 200 years ago. The bison each have an identification chip embedded in them, and seven of them wear GPS collars. They’ll never be able to roam wherever they want, and people will always have to manage fires on the land, raising the question of what is truly wild. Photo credit: Rick Hansen / U.S. Fish and Wildlife Service

“It was like I was in Yellowstone,” Crites says. But he wasn’t. His temporary job (which includes housing) is to remove trees and install fences in the Nachusa Grasslands of north-central Illinois—where wild bison recently set hooves down for the first time in almost 200 years.

The herd of 30 bison is part of an effort by the Nature Conservancy to restore grasslands in the Prairie State, which, perhaps ironically, has lost more than 99 percent of its former grassland. In the late 1980s, conservationists happened to be passing by the Nachusa when they heard the call of an upland sandpiper, a bird that breeds in tallgrass prairies. The Nature Conservancy then began buying farms in the area as they became available, and now it owns a total of 3,500 acres.

The group is doing its best to re-create a lost landscape, says Jeff Walk, director of science for the Nature Conservancy’s Illinois chapter. He knows the prairie won’t be exactly the same as yesteryear’s, but he and the rest of the team are trying to get as close a match as possible.

To do that, volunteers and seasonal employees like Crites (who spends the rest of his year working in data centers) erect fences, collect and sow seeds, and replicate natural growth cycles with controlled burns. So far, their work has paid off. Even on a winter day when dry brown oak leaves cling to trees, the undulating hills are colored in red, orange, and gray, a mosaic of newly planted big bluestem, Indian grass, and switchgrass.

But until October, the landscape had been missing one thing it needs in order to really thrive: grazers.

After decades of preparation, genetically pure bison (meaning they don’t have any cattle genes) arrived this fall from a preserve in Iowa. There are a few herds just like them living in reserves across the country, but this group is now the first one east of the Mississippi.

So far the experiment is working well. Aside from a roundup every fall, when the bison will get their vaccinations, these wild oxen will roam across 500 acres enclosed by a woven wire fence. Signs hung on the wire warn visitors that the bison are wild. Anyone who hops the fence could suffer the consequences (i.e. a potential horn to the buttocks, or worse, a trampling).

Within the enclosure, the bison eat the grasses and avoid the forbs, or flowering plants. This helps promote plant diversity, because without the bison noshing them down, grasses would dominate the prairie, leaving little room for rare species like the prairie violet. The nearly one-ton beasts will also help spread seeds and sculpt the soil with their hooves, something researchers will study on site.

“The other thing is poop; they’re very productive,” says Kirk Hallowell, a volunteer steward and my guide for the day. Their pies will fertilize the soil and attract insects, which will (hopefully) bring birds. If all goes well, Nachusa project director Bill Kleiman and ecologist Cody Considine will open up more land to the bison next year.

Despite the project’s success, the land will never be what it was 200 years ago. The bison each have an identification chip embedded in them, and seven of them wear GPS collars. They’ll never be able to roam wherever they want, and people will always have to manage fires on the land, raising the question of what is truly wild.

“It’s an interesting and important concept, but the answers don’t fit on bumper stickers,” says Kleiman. He argues that the bison are semi-wild, and an important part of our natural heritage. “Everyone loves bison. They’re a national symbol of what we discovered when we came to North America—that wistful longing for wide-open spaces. And they’re a symbol of it right here.”

The bison certainly feel wild when Hallowell and I step out of the open-air truck to get a closer look, nothing but knee-high grasses swaying between us. Lying on top of a hill, their shaggy hair blows with each wintery gust. The 1,900-pound bull, fondly nicknamed “Chain Breaker” because he did just that in a corral once, fixes his big brown eye on us. He gets up, hind legs first, and shakes. Other animals stand up, too, and join the viewing party.

We get back in the truck. As we start to drive away, I look back and see Chain Breaker, his horned silhouette regal against the gray sky. Looks wild enough, for now.