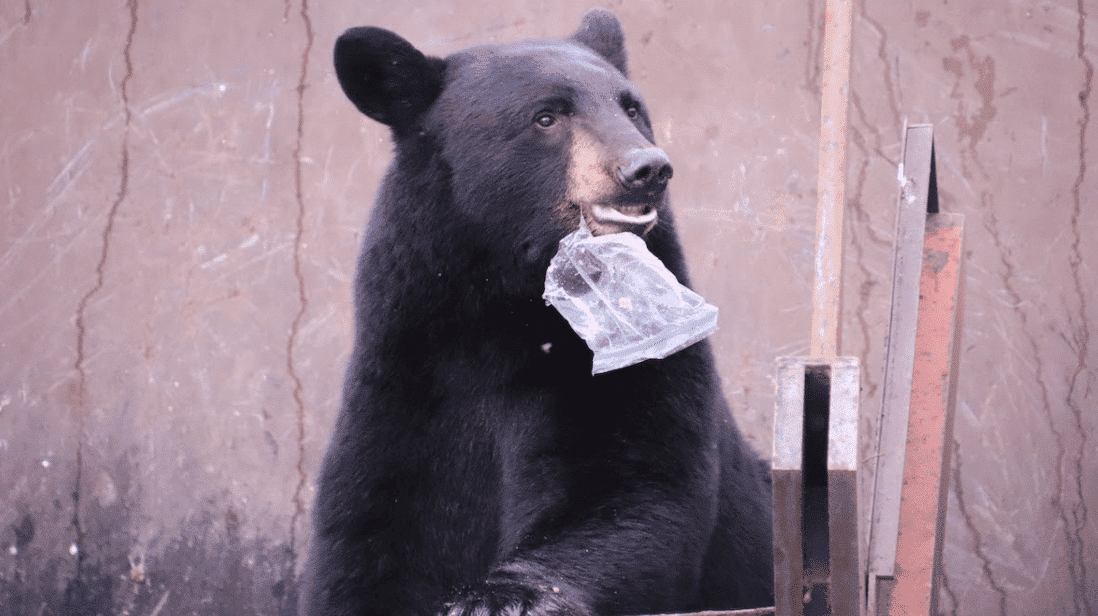 Wild bears grabbing salmon with their large paws as the fish slip back into the water — and occasionally catching one — is one of the most compelling scenes in nature. When it’s not the time of year for a salmon run, the bears’ diet consists of whatever they can find, including berries, roots, insects, grass and other plants. Unfortunately, wild bears can also develop a taste for human foods, including junk food. A recent study found that eating these foods can have an adverse effect on the microbiome of wild bears.

Scientists from North Carolina State University and Northern Michigan University (NMU) found that eating a lot of processed human foods caused the microbial ecosystems in the bears’ guts to have far less diversity than when they consumed their normal diet. Their findings are published in the paper, “Human-provisioned foods reduce gut microbiome diversity in American black bears (Ursus americanus),” in the Journal of Mammalogy.

“We know a ‘western’ diet can reduce microbial diversity in the guts of humans, mice and other species, which can have an adverse effect on their health,” said Erin McKenney, assistant professor of applied ecology at North Carolina State University and co-author of the study, Phys.org reported. “We want to know if the same is true for wildlife, particularly given the increasing overlap between where people live and where wildlife lives. One possibility our work here raises is that if wildlife begin consuming human foods, it may affect their ability to derive as much nutrition from their traditional, wild diet if they stop eating human foods.”

In the Upper Peninsula of Michigan, hunters are permitted to bait bears with human foods like cereal and candy, sometimes for weeks or months at the same site. The researchers went along on guided trips with hunters to these areas, collecting hair and gut samples from the middle part of the small intestines and colons of 35 wild black bears.

The researchers were able to identify the types of bacteria present in the microbiome of each bear and the number of each type of microbe. It was found that the biodiversity in the guts of the bears that had been consuming more processed foods was lower than those that had not. Additionally, the bears’ long-term diet, specifically the amount of sugar and corn each bear had been consuming, was determined using a carbon isotope analysis of each bear’s hair.

“Essentially, we found that the more human food black bears eat, and the longer they eat it, the less diverse their gut microbiomes,” said Sierra Gillman, first author of the study and a University of Washington Ph.D. student, reported Phys.org.

The research team looked at both the total number of different species of gut bacteria that were present in the bears’ gut microbiomes, as well as a type of measurement called Faith’s phylogenetic diversity, which measures the number of each different type of species.

“I was pleasantly surprised that the correlation between human foods and decreased diversity was so pronounced,” McKenney told EcoWatch.

McKenney went on to say that the sugars in the junk food left out for the bears contributed to the reduction of the diversification of bears’ microbiomes, as well as the generally “high-processed” nature of human foods. The processed foods tended to “simplify” what was being put into the bears’ bodies, thus limiting the sustenance available for the bacteria in their guts.

“Sugar is very easy to digest,” McKenney said, as Phys.org reported. “Lots of bacteria can consume it. In practical terms, that means processed human foods actually have less food available for bacteria that specialize in breaking down fiber or other microaccessible carbohydrates. Those bacterial specialists have trouble competing with the other bacteria for sugar, and their niche in the food web isn’t sustainable if bears don’t eat enough of their traditional diet.”

McKenney told EcoWatch that she imagines baiting the bears might make human-bear conflict more likely. “[W]e might be ‘training’ bears to prefer ‘junk foods,’ and helping them learn to associate those favorite junk foods with humans – making them more likely to sniff around houses and go dumpster diving,” she said.

Once wild bears consume human junk food, it might be difficult for their guts to recover the flora they need to digest their traditional diet, McKenney told EcoWatch. She went on to say that prior studies have shown that gut “communities” adapt quickly to dietary changes in humans and other species, including wildlife. “Bacterial species that specialize in digesting fiber or perform other beneficial roles can be very difficult to get back if they are lost,” she said. “So, baiting with human foods might not only encourage unwanted behavior: it could also ‘kill off’ gut microbes that bears need to thrive when human foods aren’t available.”

So could bears that have consumed a lot of human processed foods be given probiotics to help their guts bounce back? According to McKenney, bears’ guts aren’t as complex as humans’ and are “more of a garden hose.” This means that it takes less time for the food to pass through their system, and less time for probiotics to have potential beneficial effects. But the bears’ simple guts also host less complex microbes, which might be more amenable to new bacteria, McKenney told EcoWatch. She added that a healthy human microbiome is “so complex and stable that there might not be many resources available for a probiotic; but a bear gut might be chaotic enough that a probiotic could still have an impact.”

McKenney said that it was hard to estimate how long-term or irreversible the effects of the consumption of human foods by wild bears might be. She said that if eating the junk foods for a long period causes most of their beneficial gut microbes to “go extinct,” the bears might have difficulty if they go back to their normal, unprocessed diet. She added that future research might help determine if microbes that are beneficial to the bears’ digestion are associated with food or “whether they are specific members of a ‘climax community’ that develops across a bear’s lifetime.”

McKenney told EcoWatch that the research team is interested in comparing populations of bears across different geographic regions, and that she and her colleagues, Sierra Gillman and Dr. Diana Lafferty, are studying other species of carnivores to compare their microbiomes to those of species that eat more plants and have a more complex gut.

“It’s not clear how baiting might be affecting the microbiomes or health of other wildlife that is taking advantage of the free food,” said Lafferty, the paper’s co-author and an assistant professor of wildlife ecology at NMU, as Phys.org reported. “As we think about conservation, assessing the impact of our activities on diversity may need to extend to protecting microbial diversity. Because the evidence increasingly suggests that many of these microbial organisms are critical to the health of wildlife species.”