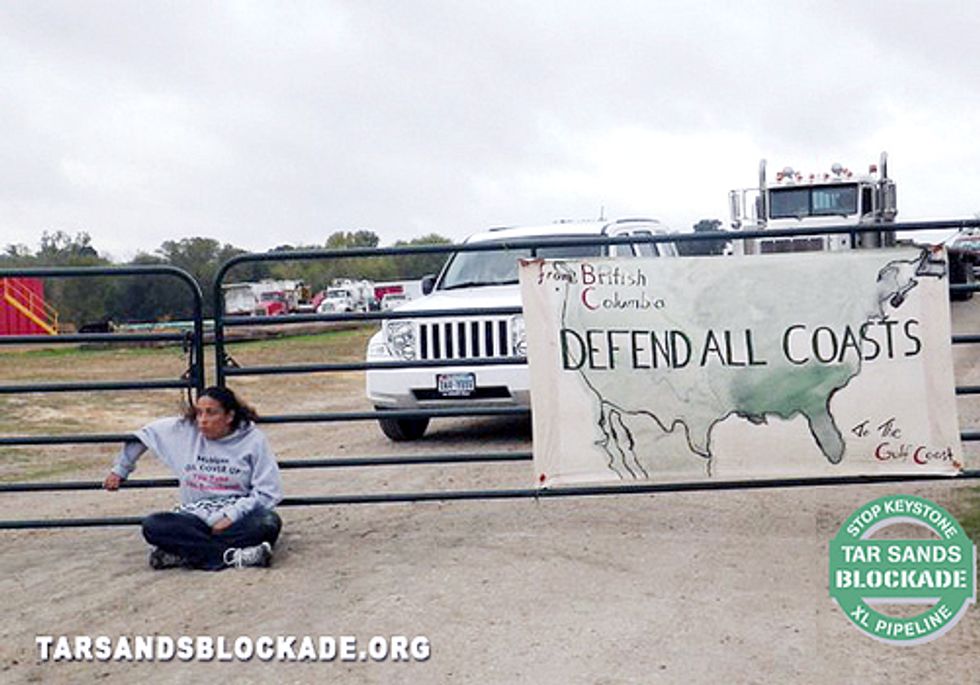 Drawing connections to all coastal communities threatened by toxic tar sands development, Cherri Foytlin, an indigenous South Louisiana mother of six and wife of a Gulf Coast oilfield worker, chained herself to the gate of a Keystone XL pipeyard.

Drawing connections to all coastal communities threatened by toxic tar sands development, Cherri Foytlin, an indigenous South Louisiana mother of six and wife of a Gulf Coast oilfield worker, chained herself to the gate of a Keystone XL pipeyard. Effectively blocking pipe from being shipped to construction sites along the controversial pipeline's route, Foytlin's action coincides with the Defend Our Coast activities in British Columbia, where more than 60 Canadian communities are protesting a proposed tar sands pipeline through their region. Hers marks the 32nd arrest since Tar Sands Blockade's actions began more than two months ago and today marks the 31st day of sustained protest at its Winnsboro tree blockade.

“This pipeline is a project of death. From destructive tar sands development that destroy indigenous sovereignty and health at the route’s start to the toxic emissions that will lay further burden on environmental justice communities along the Gulf of Mexico, this pipeline not only disproportionately affects indigenous frontline communities but its clear that it will bring death and disease to all in its path,” Foytlin declared.

Refusing to accept the Gulf Coast’s designation as the Nation’s Energy Sacrifice Zone, Foytlin, along with many Gulf Coast residents and indigenous activists are dismayed but not surprised to find the conversations regarding Keystone XL as a whole from national environmental groups to the Presidential campaigns have made little to no mention of the damage TransCanada’s Keystone XL Pipeline will heap upon Gulf Coast communities like Houston and Port Arthur, TX, where Keystone XL will terminate. Already overburdened with oil refineries and other dirty energy related industry, this neglectful attitude dovetails neatly with TransCanada's reckless disregard for the health and safety of families in the refinery communities and elsewhere along the pipeline's route.

The Rayne, Louisiana resident, who in the Spring of 2011 walked 1,243 miles from New Orleans to Washington DC as a call for action to stop the BP Drilling Disaster, has been a constant voice speaking out for the health and ecosystems of Gulf Coast communities.

She continued, “This fight is also about the personal freedoms given to us through the blood of all of our combined ancestry. Conservatives believe government is too big, that they are choking out our freedoms. The Occupy Movement believes corporations have kidnapped those same rights in the pursuit of profit over humanity. I believe both groups are right, and this pipeline and the use of eminent domain by a foreign company to seize and lay claim to American land, aided by the silence of the government, is an epic example of those truths.”

“From the Pacific Coast to the Gulf Coast, Tar Sands Blockade acts in solidarity with all communities and indigenous people rising up to defend their homes from toxic tar sands pipelines. The refinery communities of the Gulf Coast have historically been and continue to be treated as collateral damage by industry and now landowners from Canada to Texas are learning that reality, too,” stated Ramsey Sprague, a Tar Sands Blockade spokesperson born in Houma, Louisiana to a Chitimacha family. “From start to finish, tar sands development only further endangers communities already at far greater risk for death and disease from toxic environmental exposure to human-made chemical pollutants than communities further away from the petroleum refineries and the unconscionable mining operations that define their origins.”