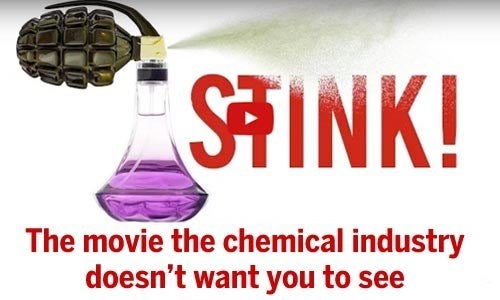 Stink is being hailed as the documentary that the chemical industry doesn’t want you to see. Variety called it a “Michael-Moore style takedown of the fragrance industry.”

In the film, father and filmmaker Jon Whelan investigates what exactly is in the products he and his children are exposed to every day. He is on a quest to find out why consumers don’t know about all of the chemicals in common household products and what, if anything, our elected officials are doing to regulate the chemical industry.

At EcoWatch, we’ve extensively covered how the chemical industry endangers human health by putting toxic chemicals in everyday products. There are 84,000 chemicals on the market and only 1 percent of them have been tested for safety. The documentary made its theatrical debut on Black Friday in New York, and has screened at dozens of film festivals in the U.S. and abroad. Stink will soon be available for viewing across the country.

And check out Whelan’s interview by The LipTV, in which he explains how the U.S. Federal Drug Administration is not allowed to ask a company to disclose a list of all the ingredients in a given product:

Should Our Children Be Genetically Engineered?