Why You Should Grow Heirloom Seeds 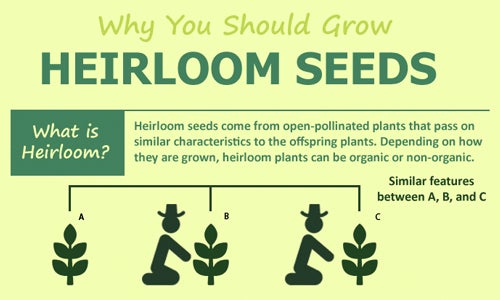 Have you ever wondered what’s the difference between heirloom, hybrid and GMO seeds? If so, you can find out thanks to this great information and infographic from Organic Lesson:

Heirloom seeds come from open-pollinated plants that pass on similar characteristics and traits from the parent plant to the child plant. There is no concrete definition that every gardener uses to define heirloom plants. Some people state that heirloom plants are those that were introduced before 1951, while others state that heirloom varieties are those introduced before the 1920s. In general, you should consider heirlooms to be seeds that are possible to regrow and pass on from one generation to the next.

One important thing to note for heirloom plants is whether they are organic or non-organic. In most cases, heirloom plants are organic because they are generally only used by small-scale gardeners who do not use pesticide or other harmful chemicals. However, there may be minor cases when chemicals do get involved since heirloom plants do not always have a similar level of innate protection that hybrid and GMO plants provide against diseases and pests. Remember, heirloom refers to the heritage of a plant, while organic refers to a growing practice. They are two different things.

Heirloom vs. Hybrid vs. GMO

There are some distinct differences that one should be aware of when it comes to heirloom, hybrid and GMO plants. First, heirloom plants are the only ones that breed true. As mentioned earlier, this means the same characteristics are passed on from generation to generation. The same cannot be said for hybrid and GMO. Hybrid plants are produced when different varieties of plants are cross-pollinated, which can happen with or without human intervention. Because there are different varieties of plants involved, it can’t be guaranteed that the offspring of hybrid plants produces identical traits as the parent plant.

Both heirloom and hybrid plants can be viewed as natural occurrences. GMO plants, on the other hand, can only be produced using unnatural methods such as gene splicing. Scientists essentially modify a seed’s DNA to ensure the resulting plant produces the desired traits and characteristics. A common example of a GMO plant is Bt-Corn.

If hybrid and GMO seeds grow plants with useful traits, why should you grow heirloom plants instead? First, heirlooms are generally known to produce better taste and flavor. Heirloom fruits and vegetables are also known to be more nutritious. Last but not least, they are less expensive over the long haul. Heirloom plants may require a bit more care than their counterparts but the effort you put in will be worth it! Don’t forget that you would also be playing an important part in preserving the genetic diversity of plants by growing heirloom seeds. After all, how can hybrid seeds be produced without the existence of the original seeds?

Where to Find Heirloom Seeds

With the demand for heirloom seeds increasing, you will find that it isn’t as difficult as before to obtain them. There are certain places you might want to check out to get seeds locally. These places include: local farms, seed exchanges, and botanical gardens. How can you be sure that the seeds you are getting definitely came from heirloom plants? One thing you might want to look out for is the Safe Seed Pledge. Although it isn’t regulated, the Safe Seed Pledge is still a good sign that the company is only providing non-GMO products. Most of the well-known seed companies have already signed up for this pledge so look out for it on the seed company websites.