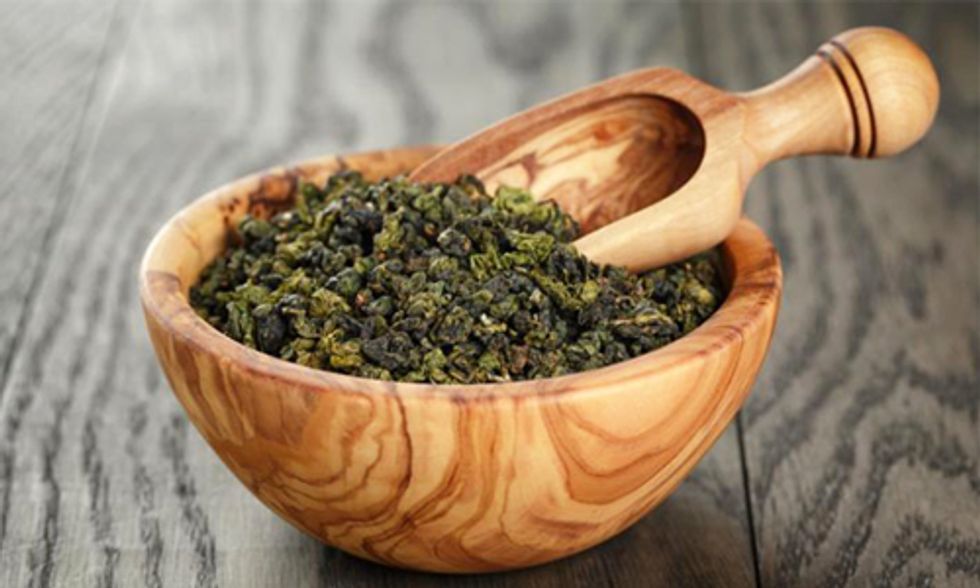 Oolong tea represents only 2 percent of the world's tea, but it's well-worth discovering (1).

It combines the qualities of dark and green teas, giving it several interesting health benefits. For example, it may boost metabolism and reduce stress, helping you feel great each day.

Oolong tea represents only 2 percent of the world's tea, but it's well-worth discovering.

This article explains everything you need to know about oolong tea and its health benefits.

What is Oolong Tea?

It's made from the leaves of the Camellia sinensis plant, the same plant used to make green tea and black tea. The difference is in how the tea is processed.

All tea leaves contain certain enzymes, which produce a chemical reaction called oxidation. Oxidation is what turns the green tea leaves into a deep black color.

This partial oxidation is responsible for oolong tea's color and characteristic taste (2).

However, the color of the leaves can vary between different brands, ranging from green to dark brown.

Bottom Line: Oolong tea is a traditional Chinese tea made from the partially oxidized leaves of the Camellia sinensis plant.

A cup of brewed tea will contain approximately (3, 4):

Some of the main antioxidants in oolong tea, known as tea polyphenols, are theaflavins, thearubigins and EGCG. These are responsible for many of its health benefits (5).

The polyphenol antioxidants found in tea are thought to help reduce blood sugar and insulin levels. They're also thought to increase insulin sensitivity (7, 8).

However, the specific effects of oolong tea are generally not as well researched as those of green or black tea.

That being said, a recent review observed that those drinking 24 oz (720 ml) of oolong tea per day had a 16 percent lower risk of developing type 2 diabetes (13).

Another study reported that diabetics who consumed 50 oz (1.5 liters) per day had up to 30 percent lower blood sugar levels at the end of a 30-day study (14).

Nevertheless, not all studies agree and one even reports an increased risk of developing diabetes for those drinking 16 oz (480 ml) or more per day (16, 17, 18).

Researchers cite pesticide contamination as a likely cause of the negative effects in this study and do not recommend avoiding oolong tea because of it (18).

Bottom Line: The polyphenol antioxidants may help maintain normal blood sugar levels and decrease the risk of developing type 2 diabetes. However, the evidence is mixed and more research is needed.

In a recent study, people who drank more than 48 oz (1.4 liters) of tea per day were 51 percent less likely to have heart disease, compared to non-tea drinkers (25).

In addition, regularly consuming 4 oz (120 ml) of green or oolong tea per day may reduce your risk of developing high blood pressure by up to 46 percent. However, not all studies agree (28, 29).

One thing to remember is that oolong tea contains caffeine, which may slightly raise blood pressure in some people. That being said, this effect tends to fade with regular caffeine consumption (30, 31, 32, 33).

Furthermore, since the caffeine content in an 8-oz (240-ml) cup is only about one-fourth of that found in the same amount of coffee, this effect is likely to be small.

Bottom Line: Oolong tea may help decrease the risk of heart disease, stroke and high blood pressure in some people.

Scientists believe that some of the polyphenols in oolong tea may boost metabolism and decrease the amount of fat absorbed from your diet (34, 35, 36, 37).

These polyphenol antioxidants are also thought to activate enzymes that help you use stored fat for energy (37).

Both increased the amount of calories burned by about 4.8 percent, but only the tea polyphenol and caffeine mix increased the participants' fat burning ability (37).

This indicates that the fat burning effects of tea are also caused by the plant compounds in tea, not just the caffeine.

That being said, no studies could be found to clarify whether this increased energy expenditure and fat burning led to any substantial weight loss in humans.

Furthermore, some participants responded better than others, so the effects likely vary from person to person (37).

You can read more in this article about green tea and weight loss. Most of it should apply to oolong tea as well.

Bottom Line: The combination of caffeine and polyphenols found in oolong tea may help increase the amount of calories and fat burned each day. This could ultimately help speed up weight loss.

In fact, several components of tea may benefit brain function.

For starters, caffeine is shown to increase the release of norepinephrine and dopamine. These two brain messengers are thought to benefit mood, attention and brain function (42, 43).

One recent study reports that tea containing both caffeine and theanine increased alertness and attention within the first 1–2 hours after consumption (44).

Tea polyphenols are also thought to have a calming effect, especially starting two hours after intake (44).

Few studies have looked specifically at oolong tea, but one found that regular tea drinkers had up to a 64 percent lower risk of brain function decline. This effect was particularly strong for regular black and oolong tea drinkers (45).

Although not all studies observed the same beneficial effects of oolong tea on brain function, none were found that showed negative effects (47).

Bottom Line: The caffeine, antioxidant and theanine content of teas may have beneficial effects on brain function and mood.

May Protect Against Certain Cancers

Scientists believe the antioxidants present in black, green and oolong teas may help prevent cell mutations that can lead to cancer in the body (48, 49).

What's more, one review reports that regular tea drinkers may have a 15 percent lower risk of developing oral cancer (51).

However, most research reports that tea has small or non-existent effects on breast, ovarian and bladder cancers (58, 59, 60).

Additionally, most research in this field focused on the effects of green or black teas, with the biggest effects noted for green teas.

Since oolong tea falls midway between green and black tea, similar benefits may be expected. However, more research is needed on oolong tea specifically.

Bottom Line: Similar to green and black tea, oolong tea may have protective effects against cancer.

The antioxidants found in oolong tea may help keep your teeth and bones strong.

A study of 680 postmenopausal Chinese women found that those who drank oolong tea regularly had 4.5–4.9 percent higher bone densities than non-tea-drinkers (62).

A higher bone mineral density could lower the risk of fractures. However, the direct link between oolong tea and fractures has not been investigated yet.

The polyphenols in tea may also have some anti-allergic properties.

One study asked 118 patients with severe cases of eczema to drink 33 oz (1 liter) of oolong tea per day, in addition to maintaining their normal treatment.

Eczema symptoms improved as early as 1–2 weeks into the study. After 1 month of the combined treatment, 63 percent of patients showed improvement.

What's more, the improvement persisted. They were still observed in 54 percent of the patients 5 months later (65).

Bottom Line: The polyphenol antioxidants in oolong tea may help relieve symptoms of eczema and the improvements may last for a long time.

Oolong tea has been consumed for centuries and is generally considered to be safe.

That being said, it does contain caffeine.

When consumed in excess, caffeine can lead to anxiety, headaches, insomnia, irregular heartbeat and in some, high blood pressure (66, 67, 68, 69).

Additionally, consuming too many polyphenol antioxidants can make them act as pro-oxidants, which are not good for your health. Excess intake may occur from taking polyphenol supplements, but this is unlikely from simply drinking tea (66).

The flavonoids in tea can also bind the iron found in plant foods, reducing absorption from the digestive system by 15–67 percent (70).

Given that the average cup is 8 oz (240 ml), you could drink a total of 6–10 cups of oolong tea per day without consuming too much caffeine.

However, pregnant women are advised to stick to a maximum of 200 mg of caffeine, which is about 3-5 cups of oolong tea per day (74).

Keep in mind that coffee, soda, energy drinks and chocolate also contain caffeine. So if you're trying to reduce your intake, make sure to account for these sources as well.

Bottom Line: Drinking up to 10 cups of oolong tea per day is generally considered to be safe for most people.

Oolong tea may not be as well known as green or black tea, but it has similar health benefits. These include benefits for heart, brain, bone and dental health.

In addition, it may boost your metabolism, decrease your risk of developing type 2 diabetes and protect against certain types of cancer.

At the end of the day, oolong tea is an incredibly healthy and tasty addition to your lifestyle. Give it a try—you won't be disappointed.

8 Tips to a Successful Detox

4 Things That Can Happen If You Quit Eating Dairy