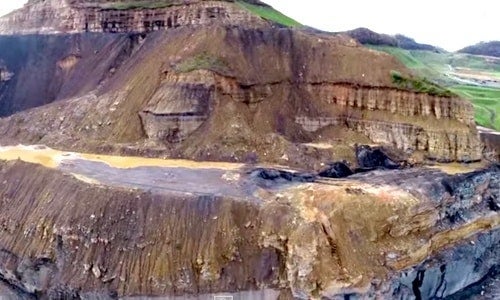 A short video released this week has stunningly detailed drone footage providing a rare view of mountaintop removal coal mining and the increasing proximity of this destructive form of mining to people living in Appalachia. The video includes interviews with local citizens who want to end mountaintop removal mining and transition their communities in a more just and sustainable way.

Trip Jennings, an award-winning videographer who has worked with National Geographic, produced the video in partnership with Appalachian Voices and with support from Patagonia. Using camera drones and time-lapse photography, Jennings weaves images of the region’s natural wonders, the destruction from mountaintop removal, and the resiliency of the Appalachian people into an unforgettable tableau.

You’ll hear from Norman, a former coal miner who would like to see more rooftop solar and other forms of clean energy in the region … Kathy, a coal-miner’s daughter-turned activist who is witnessing it moving ever-closer to communities … and Carmen, a young person determined to stay and create positive change in her hometown.

Appalachian Voices, a nonprofit regional organization, released the video as part of its “Communities At Risk” project, a data-based, online mapping tool showing the increasing encroachment of mountaintop removal mining on communities even as coal is in decline in Appalachia. The group’s aim is to educate Americans about what’s at stake in Appalachia and urge President Obama to end mountaintop removal mining.

“This is no way to leave a legacy,” says Kate Rooth, campaign director for the organization. “It’s incumbent on the Obama administration to help revive this region that has powered the nation’s economic ascendancy for generations, starting with ending mountaintop removal mining.”