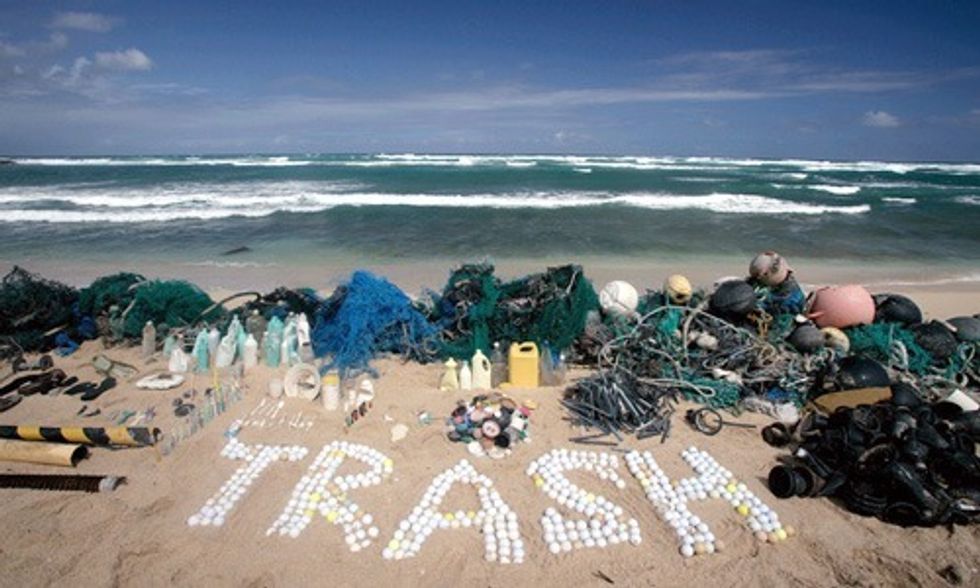 Thursday was Use Less Stuff Day. It was created to inspire us to rethink the stuff we use. All our stuff—cell phones, clothes, cars, disposable chopsticks, and on and on—comes from somewhere and has to go somewhere when we throw it out. That takes a big toll on the planet, so thinking about how to use less is an excellent idea.

I've written a bunch about the real need to re-think our approach to the holidays and the mad shopping frenzy that comes with them.

When it comes to how we do spend our dollars, the product that jumps immediately to mind as obscenely wasteful, expensive and easily preventable is bottled water.

Let's dig a bit deeper into this. It's true that in some parts of the world the water quality is so poor that it's unsafe for people to drink. There are definitely some places in the U.S. where fracking or petrochemical plants have ruined the local water supply, but even then there are better solutions than forcing the community to buy bottled water! For the most part, tap water in the U.S. is clean, readily available and thousands of times cheaper than the bottled stuff.

A four-year review of the bottled water industry in the U.S. and the safety standards that govern it, including independent testing of over 1,000 bottles of water found that there is no assurance that just because water comes out of a bottle it is any cleaner or safer than water from the tap. In fact tap water is tested more frequently than bottled water.

Where does bottled water come from?

If you take the million-dollar marketing at face value, you'd be forgiven for believing that $2 buys you glacier water from a pristine stream somewhere virtually untouched. In fact, a lot of the bottled water sold in the U.S. is just treated water from our municipal water systems; the same place our tap water comes from.

If that doesn't strike you as ridiculous, here's a really shocking example of where bottled water comes from.

While California's in the middle of a historic drought, Nestle—the largest bottler of water in the world—is drawing millions of gallons of water a year from public lands in the San Bernardino National Forest of Southern California. Using a permit that actually expired in 1988, Nestle is able to take huge amounts of water off public lands while paying the Forest Service just $524 a year. So while California's Governor has proclaimed a state of emergency because of water shortages, Nestle's profiting from the little that's left. Does that make sense to you?

As for the plastic containers that bottled water comes in, plastic's made from oil and there's nothing good about drilling that stuff up. To avoid more drilling, ideally all plastic would get recycled over and over, but that's not what happens.

Less than one-third of plastic bottles in the U.S. currently get recycled. Litter, runoff from poorly managed landfills, and other sources mean that plastic bottles often end up out at sea or polluting our coastlines. This is where some really depressing problems start. Plastic doesn't break down like natural materials—it doesn't go away, it just goes from being a floating bottle to tiny plastic particles that are easily eaten by fish and other marine species or simply spread even further afield. A single one-liter bottle could break down into enough small fragments to put one on every mile of beach in the entire world. Ten to 20 million tons of plastic end up in the ocean each year.

Bottled water is just one example of heavily marketed stuff that we could just as easily do without.

As you're planning your holidays with friends or family in the coming week, please try to think before you buy. Will this really make me happier? Could I borrow or share someone else's? Is there a less packaged or non-disposable version of this? Or perhaps I could just do without it altogether?