Why We Can't Frack Ourselves Out of an Energy Crisis 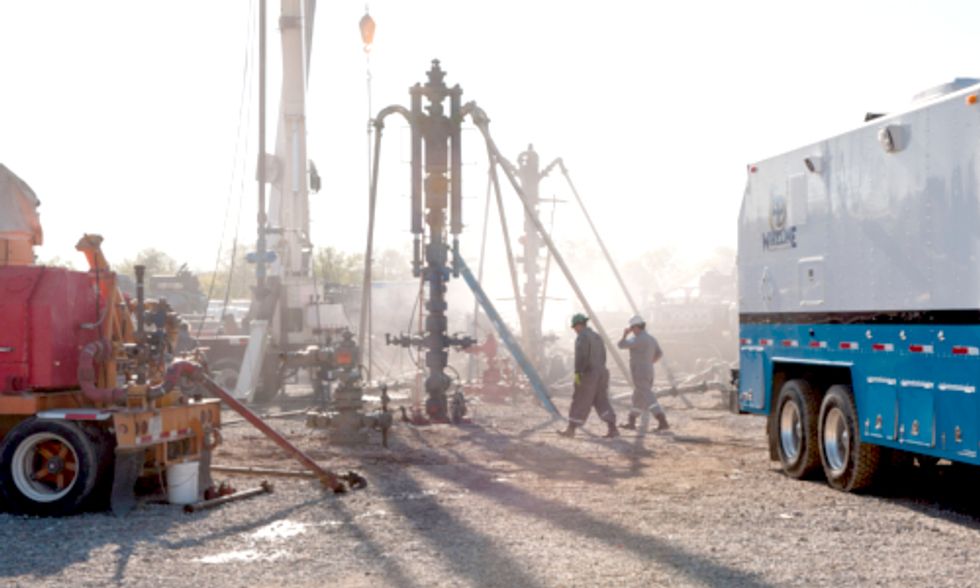 A British businessman will tell world leaders meeting in Switzerland today that it is dangerous to argue that fracking for shale oil and gas can help to avert a global energy crisis.

Jeremy Leggett, a former Greenpeace staff member who founded a successful solar energy company, has been invited to the annual World Economic Forum (WEF) meeting this week in Davos. The theme of the meeting is "The Reshaping of the World: Consequences for Society, Politics and Business."

Leggett told the Climate News Network: "The WEF likes to deal in big ideas, and last year one of its ideas was to argue that the world can frack its way to prosperity. There are large numbers of would-be frackers in Davos.

Solarcentury founder is telling the World Economic Forum that fracking is not the answer to avoiding an energy crisis. Photo credit: Irekia/Flickr

"I'm a squeaky wheel within the system. I'm in Davos to put the counter-arguments to big energy, and I'll tell them: 'You're in grave danger of repeating the mistakes of the financial services industry in pushing a hyped narrative.' This refers to the way in which banking leaders had "their particular comforting narrative catastrophically wrong, until the proof came along in the shape of the financial crash."

Leggett founded Solarcentury, the UK’s fastest-growing solar electric company since 2000. He also established the charity SolarAid which aims to eradicate the kerosene lamp from Africa by 2020, and chairs the Carbon Tracker Initiative. His book, Half Gone: Oil, Gas, Hot Air and the Global Energy Crisis was published in 2005, and his latest, The Energy of Nations: Risk Blindness and the Road to Renaissance, in 2013.

Leggett says the conventional oil industry is facing an imminent crisis, because existing crude oil reserves are declining fast, it is having to find the money for soaring capital expenditure, and the amount of oil available for export is falling.

"Big Oil is still extremely powerful and well-capitalized", he says, "but it is fast approaching sunset. The profitability of the big international groups—like Exxon, Shell and BP—is a real worry for investors, and they've been largely locked out of the easy oil controlled by national companies—just look at BP and Russia.

"Gas? Unless the price goes up, the whole U.S. shale gas industry is in danger of becoming a bubble, even a Ponzi scheme. All but one of the biggest production regions have peaked already, and losses are piling up. This is an industry that's in grave danger of committing financial suicide."

A linked message that Leggett will deliver is that there is a growing danger of a carbon bubble building up in the capital markets. He says investors who think governments may agree stringent and strictly-enforced limits on greenhouse gas emissions might decide their investments in oil and gas are at risk of becoming worthless.

There is little sign yet that such limits are likely any time soon. But Leggett says that is to miss the point: "You don't have to wait until agreement is close, or even probable. You have to believe only that there's a realistic chance of policymaking which means assets might be stranded."

He will also tell his audience "to take out insurance on the risk of an oil crisis, by accelerating the very things we need to deal with climate change". Chief among these, he says, is the need to channel funds withdrawn from oil, gas, and coal into clean energy instead—though he acknowledges that, as a renewable energy entrepreneur himself, he may be accused of self-interest.

Leggett fears a world oil crisis could occur as early as 2015. And when it comes, it will certainly mean "ruinously high prices," for a start. But it will mean something more, he says. Last December he worked with a U.S. national security expert, Lt. Col. Daniel Davis, to organize the Transatlantic Energy Security Dialogue. Leggett has a regard for the views of people like Davis.

"The military are better than your average politician or consultant to big energy at spotting systemic risk," he says.

Leggett says military think-tanks have tended to side with those who distrust "the cornucopian narrative" of the oil industry. One 2008 study, by the German Army, says: "Psychological barriers cause indisputable facts to be blanked out and lead to almost instinctively refusing to look into this difficult subject in detail. Peak oil, however, is unavoidable."