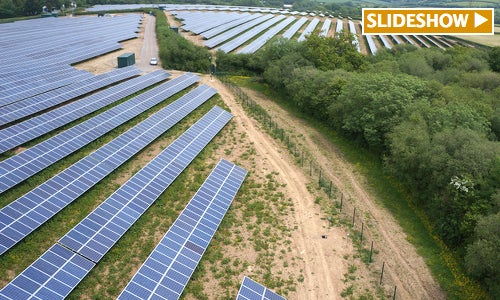 The United Kingdom’s solar industry burst out of the gate this year, according to a new study.

Collectively, the industry installed 1.1 gigawatts (GW) from January through March, according to NPD Solarbuzz. The research and analysis firm’s vice president, Finlay Colville, says the increase was paced by late 2013, when the European Union began imposing anti-dumping tariffs on some Chinese solar panel manufacturers, opening the door for Europe’s solar producers.

The installation number rises to 1.54 GW when 2013’s fourth quarter is added. Since then, there have been 131 ground-mounted projects installed, with 50 projects greater than 10 megawatts (MW). The industry installed about 1.45 GW in all of last year.

“With the future of onshore wind looking increasingly at risk, a new Solar Strategy released from [The Department of Energy and Climate Change], a likely reduction in Chinese module pricing in Europe and a whopping project pipeline growing under 1.4 [Renewables Obligation Certificates] it begs the question: Can it get any better for the UK solar PV industry,” Colville wrote in NPD’s analysis.

According to IHS Technology, the answer to that question is a very certain, ‘yes.’ The global energy, economics, geopolitical risk and sustainability information firm predicts that the UK solar industry will add 2.5-3 GW annually until 2018. That means a total of 13 GW installed over the next five years.

“This would put the UK on track to overshoot the government’s 20 GW by 2020 ambition, which may result in a revised support environment,” Josefin Berg writes in an analysis. “Based on the 922 MW of utility-scale systems that IHS estimates were installed in Q1 2014, IHS forecasts utility-scale installations to peak in 2014 at a total of 1.5 GW. From 2015 onwards the ground-mount segment is set to decline gradually as the incentive scheme changes and the focus shifts towards commercial rooftops.”

The five largest engineering, procurement and construction firms in the UK were responsible for 46 percent of the utility-scale projects in the first quarter in the UK, according to IHS. Those were Conergy, British Solar Renewables, Martifer Solar, Grupotec and Isolux Corsan. The largest investor is Lightsource Renewable Energy, which owns 190 MW of the utility-scale projects installed so far in 2014.

“The UK has emerged as one of the most dynamic PV markets in Europe,” Berg said.