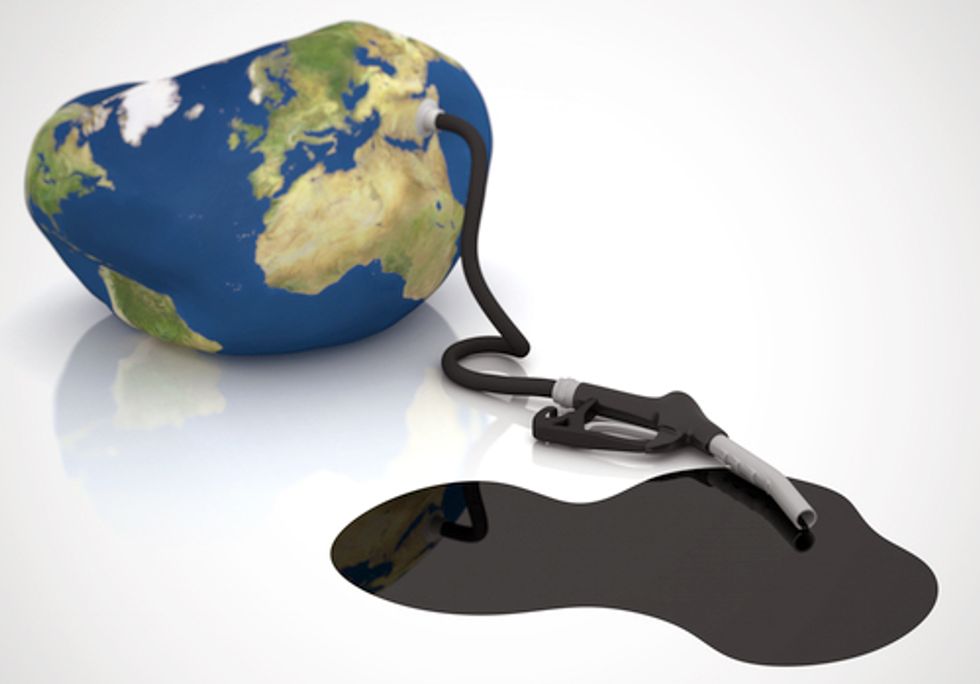 Just three short years ago, it appeared that North America was on the verge of finally kicking that nasty dirty energy addiction that has been crippling our economy and energy independence. The U.S. had elected a President Barack Obama who set incredibly lofty goals for renewable energy targets, and green energy investments across the continent were higher than anywhere else in the world.

And then, all of a sudden, nothing happened. The promises of politicians went unfulfilled, investments began flowing to other countries and we returned to the fossil fuel spigot for another hit.

And though North America includes numerous countries and territories, the two biggest culprits holding the continent back are the U.S. and Canada.

In the early part of this century, both North America and Europe were investing solidly in renewable energy projects and technology. As Renewable Energy Focus pointed out:

But in the span of just two years, from 2009 - 2011, the U.S. went from being the world leader in renewable energy investments to third behind both China and Germany. But it wasn’t from a lack of profitability. In 2011, solar firms in the U.S. were up $1.9 billion in trade differences, meaning that our technology was being bought up all over the globe. We were a leader, and we were at the forefront of renewable energy technology.

While North America was backing off of our renewable energy projects, the rest of the world seized the opportunity to take the lead. Even the oil-rich countries in the Middle East realized that an oil addiction is not sustainable:

In the Middle East, Morocco has invested $1.1 billion (Dh4 billion) in renewable energy in 2011. Saudi Arabia plans to generate 41 gigawatt energy within a few years, which will save half a million barrels of oil used for energy generation. Such initiatives after the UAE’s lead to host Irena in Abu Dhabi has changed the discussion on global climate change. The nations producing (polluting) hydrocarbons are leading the discussions to promote clean energy.

In South America, a continent that has already been working to reduce their emissions due to their location, which is considered to be especially susceptible to the effects of climate change, there is a massive push among governments to continue to develop sources of renewable energy such as hydroelectric, geothermal, and solar.

Businesses in Australia are rushing to switch their buildings over to solar power, now that the price of solar technology is falling. While they may be more motivated by money, there is an undeniable affect on electricity production and therefore carbon emissions from the switch.

The European Union has been working towards producing more renewable energy since at least 1997, and today is the number two producer in the world of renewable energy. Germany in particular has managed to reduce their reliance on coal over the last 50 years, replacing substantial portions of their energy generation with solar power. In the UK, wind farms have become massive epicenters for both profit and energy production.

But it isn’t just renewable energy investments where North America is behind the curve, we’ve fallen behind the rest of the world in holding the dirty energy industry accountable for their actions.

The best example came recently from Brazil. After back to back oil spills off the coast of Rio de Janeiro, drilling company Transocean and oil giant Chevron were ordered to stop drilling in Brazilian waters. And while a federal court in Brazil has since ruled that both companies can continue operating the offshore rigs that are already active, they are still not allowed to start any new operations until a full investigation has concluded on what caused the two oil spills.

Contrast that to Transocean’s activities in North America, where the company owned the Deepwater Horizon oil rig that exploded in 2010, killing 11 men and causing millions of gallons of oil to leak into the Gulf of Mexico. How did the U.S. punish the company? After a meaningless moratorium that was more symbolic than anything else, our government decided to speed up the offshore oil drilling permitting process. That’s a stark difference from Brazil’s actions to ban the company from doing business in their waters.

And Canada has fared no better on their punishments. In its first year of operation, the Keystone I pipeline had one major oil spill and 11 minor spills. Rather than taking action to hold the company accountable, they were allowed to move forward with an even bigger and more flawed pipeline plan (Keystone XL) that would put both Canada and the U.S. at risk of a massive oil leak or spill.

Fracking has provided another great example. In the U.K., fracking company Cuadrilla Resources voluntarily halted their fracking activities in areas where the practice had been linked to earthquakes. In the U.S., even after a U.S. Geological Service study said that there was a strong correlation between fracking and earthquakes, no fracking well sites have been been halted except for five wastewater injection well sites in Youngstown, Ohio, after it was confirmed that the disposal sites caused 12 earthquakes.

So with everyone else making huge gains in the area of renewable energy, why has North America fallen so far off its pedestal? There are two answers to that question, and they are joined at the hip:  Money and spin.

That money and spin plays itself out in three important areas—the media, government and lobbying/astroturf groups.

In the U.S., we’re cursed with a media that devotes far more time to climate change skeptics and industry insiders. From Stephen Lacey at Think Progress:

According to a new analysis of data released last year, American newspapers are far more likely to publish uncontested claims from climate deniers, many of whom challenge whether the planet is warming at all and are “almost exclusively found” in the U.S. media. The study was  published in the journal Environmental Research Letters.

The researchers were trying to answer three important questions: Is climate denial and disinformation as prevalent in the newspapers outside America? Is it mostly right-wing papers publishing these pieces? And what types of skeptics are being published in different countries?

In all three categories, the U.S. emerged as a unique leader in promoting climate denial in the press.

And print journalism is only a small portion of the problem. The main area where spin has become so effective is in our televised media. According to Media Matters, during the massive heat waves that swept the continent this past summer, news outlets like ABC, Fox News and CNN barely mentioned the role of climate change in their coverage (the only time Fox even mentioned climate change was when they were deriding it.) They go on to point out that only 8 percent of total media coverage even mentioned the role of man made climate change in the massive heat waves.

Again, things in Canada were no better. Reports show that climate change coverage in Canada has been dropping every year since 2007, even as the evidence of climate change becomes more and more clear.

Contrast that with Australia, which recently ordered their version of Rush Limbaugh, Alan Jones, to undergo “factual accuracy training” for his constant denial of climate change and for misleading the Australian public.

But it isn’t just the media that is misleading the public, elected officials in North America have been doing a fine job of spreading misinformation themselves.

In the U.S., politicians (primarily from the Republican Party) have been on a crusade to convince the American public that President Obama and the Democratic Party are responsible for the spike in gasoline prices, they are responsible for the lack of jobs because of their pesky oversight agencies like the U.S. Environmental Protection Agency, and that they are holding us back from energy independence and job growth by not approving dangerous projects like the Keystone XL Pipeline.

Further north, Canadian environment minister Peter Kent has been telling the entire world that Canada’s vast tar sands reserves are not only the wave of our energy future, but that they are safe and virtually renewable. Behind closed doors, however, Kent has been telling those closest to him that there is absolutely no evidence to back up his claims.

So what’s the point? Why would politicians and the media even concern themselves with this spin?

The answer to that lies in the second part of our equation—money. Billions upon billions of dollars have been spent by the dirty energy industry in North America to set up astroturf organizations, to fund political campaigns, and to buy advertisements aimed at keeping the populace in the dark about their destructive practices.

In Canada, the dirty energy industry lobby has been hard at work creating whitewash campaigns to help sell Canadian tar sands to the rest of the world, even claiming that they are producing "ethical oil," whatever that is. To make matters worse, the tar sands lobby even formed secret committees with the Canadian government, meaning that they were able to completely infiltrate the political system.

In the U.S., the dirty energy industry’s lobbying efforts have been blinding. Astroturf groups are a dime a dozen, and have been working to push everything from deregulation to the approval of the Keystone XL Pipeline to increased oil drilling on public lands. All of the money from these groups can be directly traced back to the dirty energy industry, and all of the money spent on these efforts serves only to increase the industry’s bottom line.

North American companies and politicians appear to be incredibly short-sighted in their energy decisions. While conventional fossil fuels may be profitable and easy today, they are not sustainable, and they are destroying the planet. Other countries understand the threats that the globe is facing, but the U.S. and Canada seem perfectly content to bury their heads in the sand.