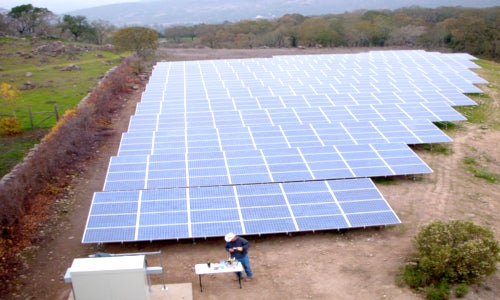 The United Nations Intergovernmental Panel on Climate Change’s latest report, which explores ways to cut carbon emissions, put the world on notice. Despite efforts in the United States, Europe and developing countries such as China to ramp up energy efficiency and renewable energy, global carbon emissions have been increasing at a much faster clip than they were just a few decades ago. To avoid the worst of the worst, IPCC scientists say emissions will have to be reduced 40 percent to 70 percent by 2050 and warn that we only have a 15-year window to reverse course.

As Edenhofer points out, the cost of doing nothing likely would dwarf whatever we might spend today to address climate change. That said, it makes the most sense to replace fossil fuels with the most cost-effective, safest, carbon-free and low-carbon options that can be deployed as quickly as possible. 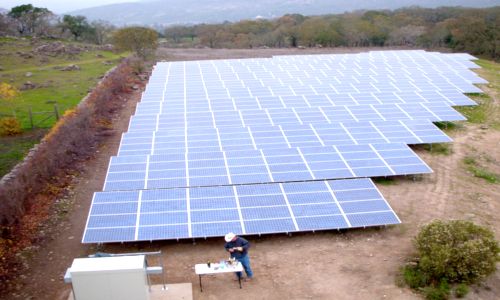 If there was ever a time for renewable energy, it’s now, argues Elliott Negin from the Union of Concerned Scientists. Photo credit: Steve Jurvetson/Flickr Creative Commons

For the biggest source of U.S. carbon pollution—electric utilities—the best solution is wind, solar and other renewable energy technologies, which, according to the new IPCC report, “have achieved a level of technical and economic maturity to enable deployment at a significant scale.” In other words, renewables are now a lot cheaper and better than they were when the last IPCC report came out seven years ago.

What about nuclear power? Although it now provides the most carbon-free electricity in the country, without a national carbon tax or cap-and-trade program, it’s not economic, even with more than 50 years of generous federal subsidies.

Over the last decade, the estimated price tag for a new reactor has skyrocketed, jumping from $2 billion in 2002 to as high as $12 billion today. Wall Street won’t finance a project unless Uncle Sam co-signs the loan, which leaves taxpayers on the hook if a project fails. So while Southern Company and its partners, with the help of an $8.3 billion federally guaranteed loan, are building two new reactors at the Vogtle nuclear plant site in Georgia, it’s unlikely the industry will be able to muster more than two or three more in the next decade. As recently as five years ago, utilities applied for licenses to build more than 25 new reactors.

At the same time the nuclear industry’s hoped-for renaissance has fizzled, older reactors are shutting down. Four reactors closed last year because of prohibitively expensive safety upgrades or competition from cheaper energy sources, namely natural gas and wind. Economics will close a fifth reactor, Vermont Yankee, this fall, and the nation’s largest nuclear plant operator, Exelon, said in February that unless market conditions improve, it will announce plant closings by the end of this year.

Unlike new reactors, the cost of solar and wind has dropped dramatically. Solar panel prices have plummeted more than 75 percent since 2008, and the cost of generating electricity from wind turbines declined more than 40 percent over the past three years, sparking a construction boom. Last year, solar installations in the United States amounted to a record 5.1 gigawatts, boosting the national total to nearly 13 gigawatts—enough to power nearly 2.2 million typical American homes. And by the end of December, there were enough wind turbines across the country to power 15.5 million homes and cut annual electric power sector carbon emissions by 4.4 percent.

Given solar and wind’s exponential growth, experts see tremendous potential. The Department of Energy’s National Renewable Energy Laboratory (NREL), for example, projects that wind and solar could produce 15 percent of U.S. electricity by 2020, 27 percent by 2030, and 50 percent by 2050.

Still, naysayers harp on the fact that wind and solar power are intermittent. The sun doesn’t always shine, they say, and the wind doesn’t always blow. That may be true, but it’s not a deal-breaker. Studies by NREL and electricity grid operators in the United States and Europe conclude that larger contributions from solar and wind would not create significant technological problems or impose higher costs.

“Meeting demand in the face of variability and uncertainty is old hat for grid operators,” said Mike Jacobs, a senior energy analyst at the Union of Concerned Scientists (UCS) who used to work at NREL. “They’re already doing it with wind and solar here in the United States and in Europe.

“Besides, spreading wind and solar installations over a large enough area would help address the intermittency issue,” he added. “The wind is always blowing somewhere, and if we increased the percentage of wind and solar to 30 percent—which we should be able to do within the next 15 years—the system’s flexibility to manage supply and demand, along with a updated grid, should be able to integrate that power.”

Ramping up renewables not only would cut carbon emissions, it also would diversify the national electricity system and make it more resilient, according to a new UCS report. That system—which includes power plants, transmission lines and fuel delivery networks—was not designed to withstand all of today’s extreme weather events, many of which have been linked to climate change.

Sea level rise, for example, threatens nearly 100 coastal electricity facilities, including power plants and substations, the UCS report found. Water temperature and availability also pose major problems. Older coal, natural gas and nuclear power plants rely on a “once-through” cooling process that draws hundreds of millions, if not billions, of gallons of water daily from the closest water body. When that river, lake or ocean gets too hot, which is happening with greater frequency, the plants have to cut back production or shut down temporarily. Likewise, droughts can substantially reduce water availability, while flooding from extreme rainfall can overwhelm a plant, as it did in June 2011 when a record-breaking Missouri River flood forced the Fort Calhoun nuclear plant near Omaha to remain shut down after a scheduled refueling outage two months earlier.

Renewables don’t suffer from the same limitations. Rooftop solar panels and wind turbines, for instance, rely on smaller, more distributed units, which make it less likely that extreme weather events would have the same dramatic impact. Moreover, renewables are less vulnerable to drought and heat because they don’t require water.

To get where we need to go, the federal government has to turn its outdated energy subsidy policy on its head. The oil and gas industry has been enjoying average annual subsidies and tax breaks of $4.86 billion in today’s dollars since 1918, according to a 2011 analysis by DBL Investors, a venture capital firm. The nuclear industry, DBL found, benefited from an average of $3.5 billion a year in subsidies from 1947 to 1999. And coal, which has been getting federal and state subsidies since the early 1800s, currently receives at least $3.2 billion a year, according to a 2011 Harvard study.

Renewables, on the other hand, averaged only $370 million a year in subsidies between 1994 and 2009, according to DBL. The 2009 stimulus package did provide $21 billion for renewables, but that support barely began to balance the scales that still tilt toward fossil fuels. Just last December, for example, Congress allowed a key wind industry tax break to expire, but it continues to support massive subsidies for coal, oil and gas.

Americans represent less than 5 percent of the world’s population, but we’re responsible for 19 percent of the world’s carbon emissions. Despite the fact that China surpassed us as the world’s top carbon emitter in 2006, we’re still the worst offenders per capita. So after subsidizing coal for more than 200 years and oil and gas for nearly 100—which inadvertently got us into this mess—it’s long past time to take fossil fuels off the dole and go all out to promote renewables. Fifteen years is just around the corner.

Why Solar Cooperatives Are on the Rise