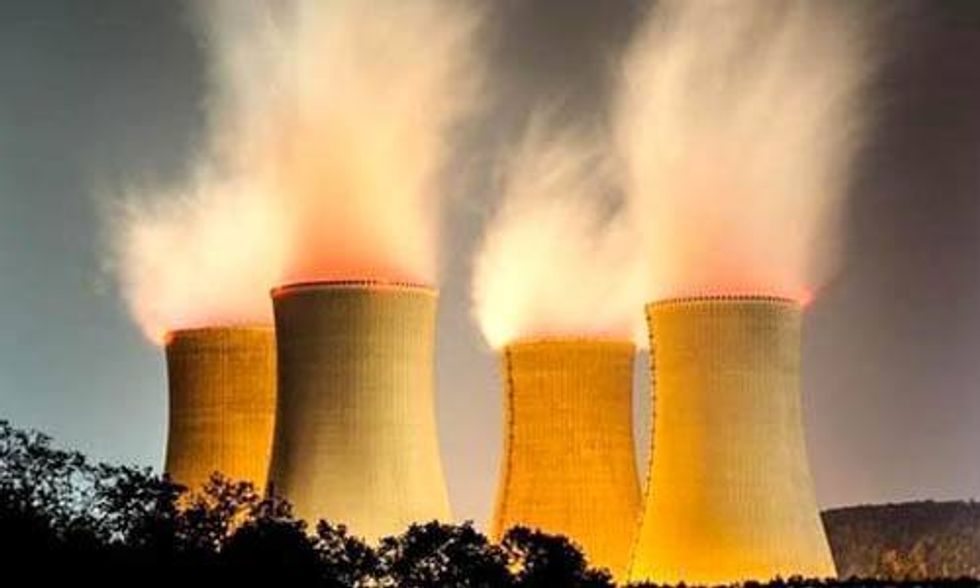 Electricity from proposed new nuclear stations in the UK will be more expensive than from any other nuclear reactors in the world, yet the government is pressing ahead with its plan to build 11 new installations, despite mounting criticism.

Phil Johnstone and Andy Stirling, University of Sussex research experts in the nuclear policy area, have put forward the suggestion that the UK needs to continue to build and run civilian nuclear power stations to maintain enough nuclear expertise in the country to run its nuclear submarines independently, and so keep its status as a nuclear weapons state. Photo credit: Tomas Halasz / Greenpeace

This contrasts sharply with Germany’s policy of phasing out nuclear power altogether—and experts in nuclear policy now see a possible explanation in the fact that Britain is a nuclear weapons state, while Germany has no wish to be one.

The UK’s approach also differs from that of France, which is investing heavily in renewables to cut its reliance on the atom. All three countries say their policies are based on the need to reduce greenhouse gases.

Renewables have already created more jobs and wealth in Germany than nuclear power, while Britain is cutting back drastically on support for solar power and on-shore wind in favor of nuclear stations designed and built by companies from France, China, Japan and the U.S.

The strange mismatch between Europe’s two largest economies, Germany and the UK, is puzzling experts, especially since the International Energy Agency and the OECD Nuclear Energy Agency  say in the 2015 Projected Costs of Generating Electricity report that Britain’s plans will make its nuclear electricity the most expensive in the world.

The guaranteed subsidy for the new stations from the British government to the French government-owned company EDF makes the cost of electricity one-fifth more than nuclear energy in France, a third more than in the U.S., and twice that of China or Korea.

This has caused a number of influential figures in the UK to call on the government to reconsider its program. The Financial Times business newspaper called it a “misconceived project.”

The Conservative government, elected in May, lacks a coherent energy policy after cutting subsidies for on-shore wind and solar, but sticks to its line that nuclear power is essential for turning Britain into a low-carbon economy.

Academics have been examining Britain’s secretive decision-making processes to try to discover why two economies as similar as Germany’s and the UK’s—both countries wanting to reduce fossil fuel use in order to cut greenhouse gas emissions—should take such divergent decisions.

Britain has much better renewable resources, yet has decided to opt for nuclear power, even though it is more expensive than on-shore wind or solar.

Phil Johnstone and Andy Stirling, University of Sussex research experts in the nuclear policy area, have put forward the suggestion that the UK needs to continue to build and run civilian nuclear power stations to maintain enough nuclear expertise in the country to run its nuclear submarines independently, and so keep its status as a nuclear weapons state.

This possible link between civil and military nuclear power has never been debated in public, although the British government has repeatedly drawn attention to the lack of young people entering the nuclear industry, and has spent millions of pounds on training programmes to attract them.

Its declared position is that nuclear power is needed to combat climate change, and that there is no link between civil and military needs.

A spokesman for the UK Department of Energy and Climate Change told Carbon Brief: “Nuclear power remains the choice that gives reliable power when it is needed, at the same time as helping Britain meet its carbon emissions targets.

“When the cost of extra backup needed for intermittent renewables is included, the cost of nuclear is competitive with any other technology.

“The UK is one of relatively few countries that has well-developed new nuclear projects at the moment. As such, cost estimates for financing new nuclear in the UK are likely to be more realistic and up-to-date compared to most countries.”

Plans for the first two reactors to be built, by EDF at Hinkley Point in south-west England, are well advanced, although preparatory work on the site has been halted and a starting date has been repeatedly put off.

The first reactor was due to open in 2018, but that was put back to 2023, and has just been postponed again because a final agreement over financing has yet to be agreed between EDF and the British government.

The government has already agreed to subsidize the cost of electricity from the station for 35 years, but financing the eye-watering £24 billion (US$37bn) construction cost has proved problematic.

A number of potential partners have dropped out, and EDF has found a potential new partner in the Chinese state-owned nuclear corporations, which wish to build their own nuclear power stations at other sites in Britain.

The latest delay and the escalating construction costs have led to the project being labelled the most expensive in the world.

According to The Independent newspaper, the UK chancellor, George Osborne, is still confident the deal with the French will represent good value for money.

In the UK Parliament, the House of Lords economic affairs committee chairman, Lord Turnbull, a former chief secretary to the Treasury, suggested to Osborne: “This thing at £92 (US$142) per kilowatt hour is turning out to be incredibly expensive and a huge commitment, and for a design which the French can’t get to work.

“Shouldn’t we really go back to the drawing board, rather than plumping for what I think will be a kind of bottomless pit and a big white elephant?”

Osborne replied that he continued to back the project.

The Financial Times disagreed, and said in an editorial: “The UK should think again about Hinkley Point nuclear power station. The economics of EDF’s project look less and less desirable. The government should seize the chance offered by this pause to look at the whole misconceived project again.

“Backing out of Hinkley Point might upset the French and embarrass the government. But a wish to spare ministerial blushes is no excuse for saddling the country with costs it cannot afford.”