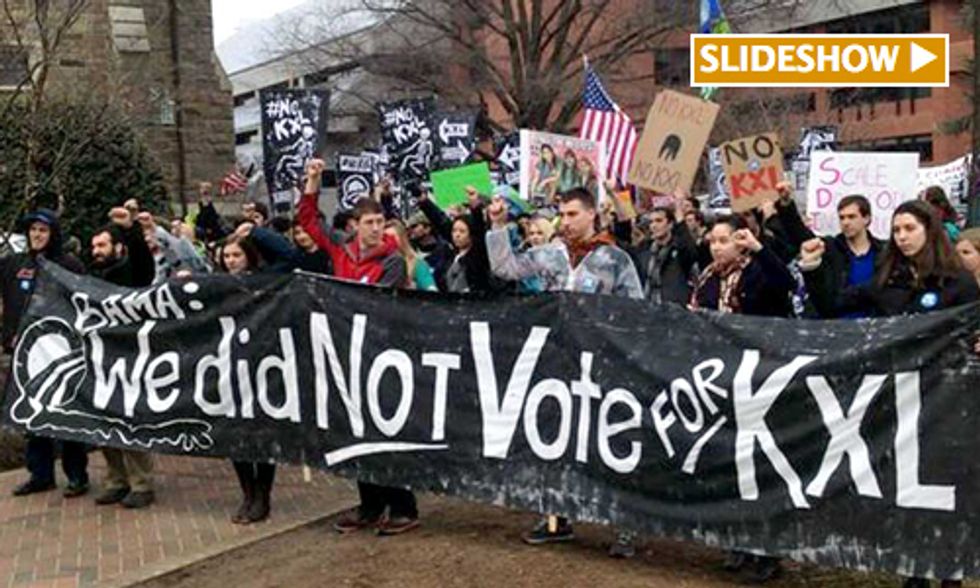 The Keystone XL pipeline proposal has hit a Nebraska stop sign, but it has deeper problems than right-of-way issues across the U.S. After all, the controversial proposal for transporting Canada's tar sands was never just about the pipeline. Just ask the thousand students who rallied in front of the White House recently, who were willing to be arrested to make their point.

Below, is a slideshow of the March 2 action:

Frustrated and angry over a lack of political action on climate change, the millennial generation is not tolerating an ineffectual Congress or President. The 18-34 year old group are 74 million strong in the U.S. and when the worst happens, they will suffer the most from climate change. With little representation in Congress—where the average age is 60—they look to civil disobedience as a strategy to create the political will to address this threat.

The fight over Keystone XL is really about a generational shift in the energy paradigm and how the U.S. will survive the twenty-first century. It concerns the wealth and jobs that the fossil fuels industry creates—how it has weaved itself into daily lives of Americans and pulled us into a formidable dependency. With growing apprehension, however, concerned citizens are sensing that the carbon-intensive lifestyle may be lethal to future generations and to survive, it is incumbent to accelerate efforts to develop other energy sources.

From Washington, D.C. and Nebraska courts, this conflict now swings to Canada, where the Alberta government owns 81 percent of its tar sands and has a long list of investment partners. Besides multinational corporations, one of its biggest sources of investment capital for mining is China, the planet's largest producer of greenhouse gases. Alberta looks to collect $1.2 trillion in royalties from its oil sands over the next 35 years, but has attracted attention because of the massive pollution resulting from the mining and burning of bitumen tar.

Canada also faces a disenfranchised youth, who feel their voices and futures have been diminished by the enormous profits bitumen tar sands portend. They are joined by First Nations aboriginal tribes who share the same political paucity and frustration. Despite the economic benefits of bitumen tar mining on their lands, First Nations point irreversible health and cultural damage. It is a critical decision for First Nations to continue its relationship with Canadian oil interests.

The world's climate scientists essentially agree that if left unchecked, carbon dioxide will worsen extreme weather, raise sea levels and create mass extinctions from an array of environmental changes. Many acknowledge that climate deniers are fed propagated ignorance by fossil fuel strategists as part of a misinformation campaign. It creates a polarized electorate, leaving the issue to develop worst case scenarios before action is taken.

In moderation, fossil fuel usage might not have posed a serious threat, but the world has moved well past that threshold. Burning of fossil fuels produces around 33.4 billion metric tons of carbon dioxide (CO2) per year and world energy needs are expected to rise by about a third over the next 20 years. CO2 has reached proportions in our atmosphere not seen for 15 million years and many scientists warn it may already be too late to mitigate damages.

As Keystone XL falters and tar sands mining continues to provoke protests, our nation is compelled to end political bickering and accede millennials a more powerful voice on climate legislation. President Obama must grasp the significance of this moment, deny the Keystone permit and tell the world his decision has nothing to do with the pipeline and everything to do with leadership.