Why the Lima Climate Talks Sucked for Women and Indigenous People 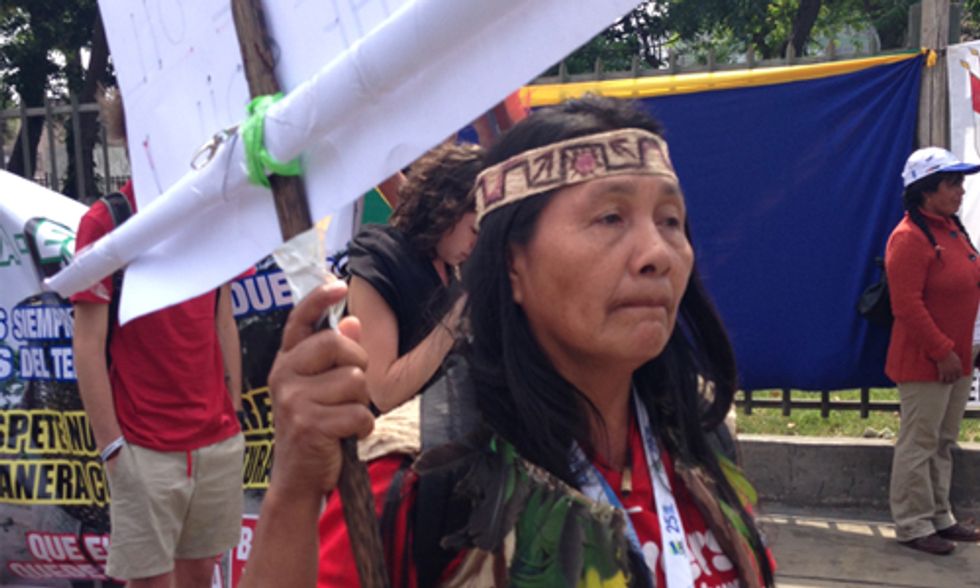 As a credentialed observer inside the COP20 in Lima last week, I was bored to tears. Endless speeches. Panel discussions in dark rooms. Men in expensive suits. My colleague Nnimmo Bassey, a leading Nigerian environmental justice activist and winner of the Right Livelihood Award, blogged, “Negotiation arenas remain places for fiddling while Rome burns.”

Observers watched the opening ceremony on a big screen from the back of the hall. All the speakers, including UN Secretary General Ban Ki-moon, said there was a need for transformation—for binding and universal agreements. They called for a higher level of ambition, as well as tangible progress on climate finance solutions such as the Green Climate Fund (GCF). They claimed that the delegates in Lima were more collaborative than at past COPs. The ceremony ended with a parade of dancers wearing a mix of what might have been indigenous costumes with a Hollywood flair. There was a lot of fanfare and little substance.

But outside the stuffy and nearly pointless convening, I was inspired. The voices for climate justice, especially those of indigenous peoples and grassroots women, were loud and clear.

Women are more than 50 percent of the world’s population. They are the most vulnerable to climate change and they have developed some of the best grassroots responses. As I have written before, solutions that ignore or leave women out are unsustainable at best and toxic at worst.

Steps forward, steps back on gender

At the COP’s Gender Day, much discussion was spent analyzing “gender responsive” approaches to climate change. Responsive means that women are not just acknowledged, but also that adaptation and mitigation strategies recognize both their needs and their ideas.

I spent hours at side meetings, inside the "Pentagonito," the local nickname for the COP venue. Most were sponsored by international NGOs trying to influence the negotiations.

I heard about forward progress on a final binding international agreement that would be gender responsive. This was heartening because women’s roles in fighting climate change are already rarely acknowledged. Yet in private conversations with two different women close to the negotiations, I learned that Saudi Arabia was blocking recognition of the rights of women and, if anything, there had been backsliding rather than progress on gender at COP20.

Would you trust Morales?

President Evo Morales of Bolivia, an Aymara indigenous person and former labor leader, delivered an inspiring speech during the opening ceremony on behalf of developing countries, which formed a coalition called the Group of 77, and China. He urged delegates to listen to indigenous peoples, and to reject capitalism, excessive industrialism, overconsumption and war.

“We need an economy for human beings and Mother Earth.” I agreed with almost everything he said.

Yet Bolivians, indigenous people and women from around the world question Morales’ rhetoric as compared to his actions. Just a month before, on Oct. 13, the BBC news reported that, “Natural gas and minerals accounted for 82 percent of [Bolivia’s] export revenues.” If Morales believes so strongly in indigenous rights and our environment, why are Bolivia’s economy and those throughout the Andes so tied to natural resource extraction, especially nationalized oil?

My first COP was in 2010 in Cancun, Mexico. There, I made my way through massive police barricades, standing with activists on the outskirts of official negotiations. Country representatives and civil society groups held countless parties at high priced resort hotels, which left me feeling disgusted. At least the Cancun COP had two outcomes: an agreement that future global warming should not exceed two degrees, and the creation of the GCF, formed to move money from developed to developing countries—those hardest hit by climate chaos, yet having done little to cause it.

Thousands marched in the streets of Lima and attended the alternative People’s Summit, The Rights of Nature International Tribunal and other gatherings. Photo credit: Global Greengrants

Four years on, scientific reports show that many parts of the world have exceeded the two-degree tipping point. The GCF is still working on its business plan and has funded nothing.

With conditional pledges from northern countries, most recently China and the U.S., resources are starting to funnel into the GCF, but there is still a drastic need to reach the $10-15 billion goal. This is daunting considering the timing and how long it has taken countries to respond and contribute. The GCF desperately needs to devise a grassroots grant-making mechanism with funding targeted to indigenous communities and a gender component.

Except for Morales and Mary Robinson, indigenous people and women have been notably missing in official COP negotiations and Green Climate Fund decision-making.

Thousands marched in the streets of Lima and attended the alternative People’s Summit, Rights of Nature International Tribunal and other gatherings outside the "Pentagonito."

I found the Ecuadorian women leaders particularly impressive: Nina and Patricia Gualinga from the Sarayaku community, which has kept big oil out of its territory. Gloria Ushigua, an Ashinwaka from the Sapara Women's group, who had organized a march of women from the Amazon to the capital city of Quito to oppose oil exploitation in indigenous territories. She was inspiring, but told us officials in Quito were unresponsive.

Who is listening to them?

No one had high hopes that things would get done inside the official COP this year. Secretary General Ban Ki-moon "hailed delegates for paving way to 'meaningful' climate agreement.” But delegates have fiddled with the same 20 documents for more than 20 years. Everyone is talking about the road to Paris next year.

Yes, let’s wait another year to address climate change in any meaningful way. Why should it be any different?