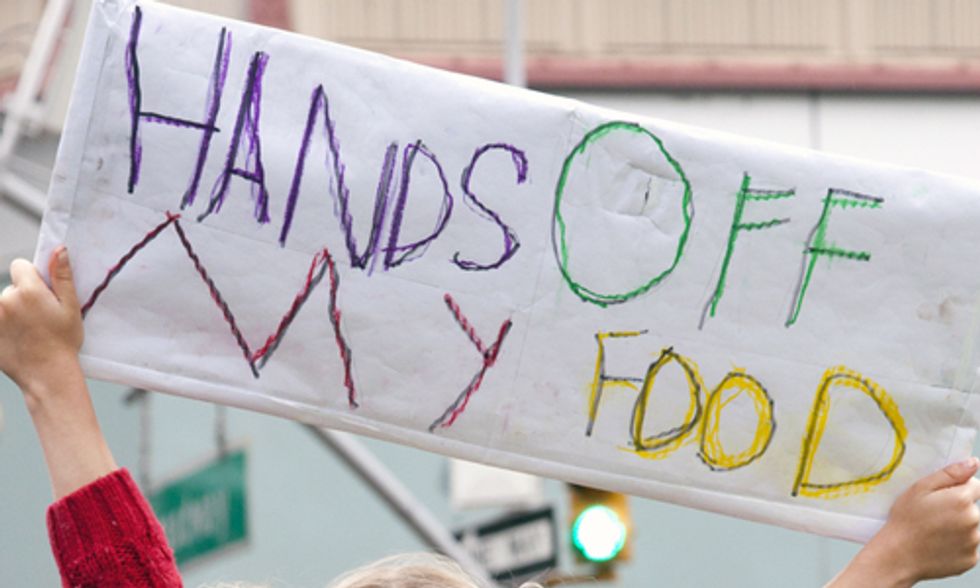 I had the pleasure of speaking on a panel Tuesday night with Mark Bittman, who mentioned that his New York Times opinion piece the following day about GMOs [genetically modified organisms] would be controversial. On Wednesday morning I looked and saw why: It called out the food movement for focusing too much on organics and GMOs—saying of the latter, "GMOs are probably harmless ... It's helped accelerate industrial agriculture and its problems and strengthened the positions of unprincipled companies. But the technology itself has not been found to be harmful." He argues that instead, the movement should focus on making agriculture sustainable and promoting healthier food in general.

We most certainly should fight against untested, unproven genetic experiments that rely on chemical inputs and give corporate food giants increasing control over our food.
Photo credit: Shutterstock

But these concepts aren't mutually exclusive—in fact, GMOs are part and parcel of the industrialization of the food system, as Bittman describes. What's worse, disparaging the views of people who care about organics and GMOs is disempowering to the tens of thousands of food activists fighting to have a say in their democracy by working to label GMO foods—clearly an important transparency issue. Dissing those who are concerned about pesticides and GMOs distracts from the real debate about the harms of chemicals and untested technologies in our food supply—and the fact that both phenomena stem from the corporate control of our food system and our democracy.

I have great respect for Bittman, and think that for the most part, he's helped bring about much needed attention to the myriad problems with how we grow, sell and eat food (I look forward to reading his new cookbook highlighting his "flexitarian approach.") And much of the piece I agree with: We need to talk about sustainability more generally. We need to talk about food marketing to kids and the harms of processed foods. We need to encourage people to eat better and to stay away from processed food. But I don't agree with setting up these examples as a way to squash debate on organics and GMOs. They are all issues that people who fight for a better food system should address. We should be talking about them all in the narrative about the dysfunctional food system and our vision for the future.

I am baffled by Bittman's unwitting support for the agrochemical industry. The health effects from agrochemicals are well documented and while U.S. Environmental Protection Agency sets limits on the amount of each pesticide that can be on each food item, the agency does not limit the number of different pesticides or the synergistic or accumulative effects they may have—especially in children.

What's more, Bittman disregards the fact that there have been no long-term studies on the human health effects of genetically engineered foods. As Bittman acknowledges, giant agribusiness companies have used GMOs to take control of the production of crops, hiding behind false claims of sustainability. But he does not go on to say that the production of genetically engineered crops requires massive amounts of herbicides that create superweeds, pose risks to human health and threaten ecosystems.

Indeed, none of this seems harmless, or "probably harmless," to me.

Honestly, while some in the food movement lauded the piece, it left me scratching my head. As someone that the movement looks up to, it's really disappointing to see Bittman setting up GMOs and organics as things that we shouldn't care about. We most certainly should fight against untested, unproven genetic experiments that rely on chemical inputs and give corporate food giants increasing control over our food. Debating the details of whether the science itself is imminently harmful is really a red herring—one that the industry is happy to have journalists focused on because it distracts the public from the real fight we're engaging in for a better food system.

For that, I fear Mark Bittman's piece is actually, probably, very harmful and I would ask that he reconsider.