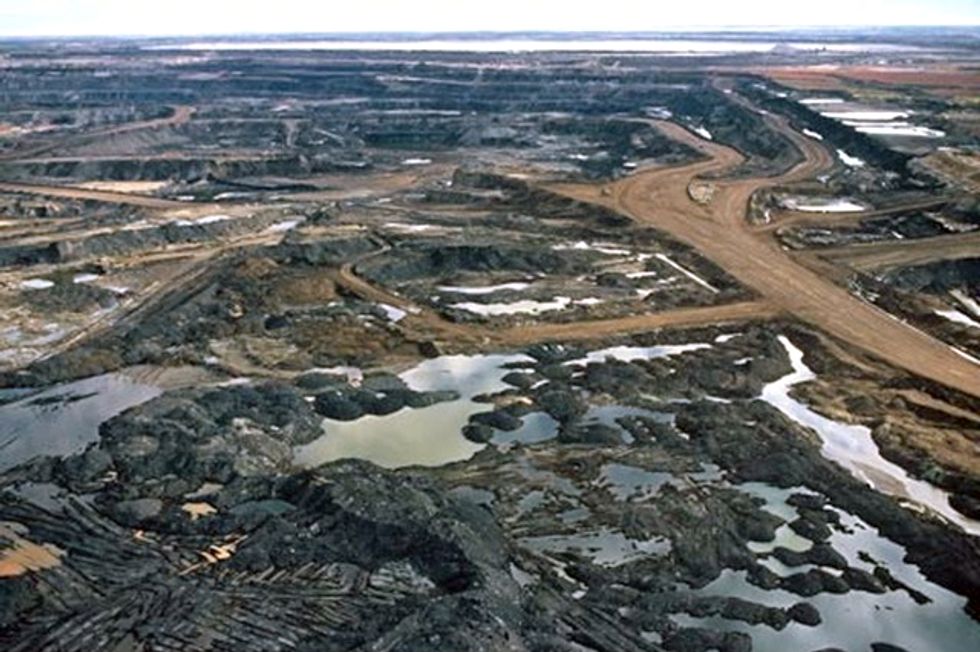 I've had many friends, even like-minded, eco-friendly friends, ask me, "Why is Keystone a big deal? Isn't it just another pipeline?"

Keystone is a big deal, because it is not just another pipeline. It is the make-or-break piece of the puzzle for profitably exploiting the tar sands in Canada. Without the Keystone XL pipeline, tar sands will still be dug up; but with Keystone, the profits soar, making it a much more lucrative deal for the Canadian oil companies; and to maximize their profits, they will dig up as much as possible. And therein lies the problem. The sheer volume of tar sands awaiting exploitation is staggering. When asked about the impact on climate change, the director of NASA's Goddard Institute of Space Studies, Dr. James Hansen, explained burning the tar sands would be "game over" for the climate.

Specifically, this is what Hansen had to say about carbon emissions that would come from the tar sands:

The level of heat-trapping gases would assure that the disintegration of the ice sheets would accelerate out of control. Sea levels would rise and destroy coastal cities. Global temperatures would become intolerable. Twenty to 50 percent of the planet's species would be driven to extinction. Civilization would be at risk.

That's a pretty compelling argument if you ask me. Shouldn't that be the end of the discussion?

If we listen to the top climate scientists, we should leave the tar sands where they are, underground. But others will still insist we are going to keep burning oil for years to come, so aren't we better off using Canadian oil rather than Middle Eastern oil? No. Canadian tar sands are a thick, heavy tar (it is the black "goo" in asphalt) and the oil that is produced is 19 percent dirtier and 17 percent more carbon intensive than Middle Eastern crude. In addition, the exploitation of the oil is a much more energy intensive process. They are building entire power plants in Alberta, just to power the tar sands processing.

Of course, the Canadian oil companies would prefer to dig up the tar sands; after all, they have a hefty profit to make. Proponents of Keystone claim the Canadians will dig up the tar sands whether we participate or not. But there are limited options for bringing the tar sands to market. They can ship to Vancouver, but that would require crossing the tribal lands of the First Nations, who strongly oppose the tar sands and have been successful, thus far, in fending off exploitation of their lands. TransCanada could ship the tar sands to the east coast of Canada, but it is a more expensive option that makes the sale of the tar sands less economically viable. The most profitable option by far, is building the Keystone XL pipeline, which may explain why they have invested so much in lobbying in Washington, DC. The Canadians have a lot at stake. But let's remember, this is Canadian tar sands, and Canadian profits, not American. And the only thing worse than caving to oil lobbyists is caving to foreign oil lobbyists.

Not only do we not make the profits from selling the oil, if we flood the energy markets with dirty tar sands, there will be less demand for American renewable energy. So by helping our neighbor to the north, we are handcuffing our own future. The Keystone XL pipeline will create approximately 5,000 short term construction jobs, and according to the State Department report, only 34 long term jobs. The U.S. Council of Mayors report estimated that the potential for jobs in the renewable energy markets is 1.2 million jobs. By building more pipelines, we are choosing a future of fossil fuels rather than renewables.

Furthermore, more fossil fuels means more climate change. And the cost of climate change is enormous. Hurricane Sandy cost $50 billion. The drought in 2012 cost billions. It will cost hundreds of billions to move interstate highways when sea levels rise. There is a cost to transition our economy off of fossil fuels, but the cost of inaction is far higher.

Finally, Keystone XL is a big deal because it is a reflection of the commitment and integrity of our leaders. President Obama made strong statements in both his 2013 inaugural address as well as his State of the Union speech. But actions speak louder than words. Saying we need to address climate change, while moving towards a future of tar sands is completely counterintuitive. President Obama and Secretary of State Kerry have the chance to change the course of history; they have the chance to be visionary leaders and transform our nation to a society built on innovation that provides both an environment and economy that are sustainable.

That is why Keystone matters.