Why It's Worth Going to Jail to Stop Keystone XL 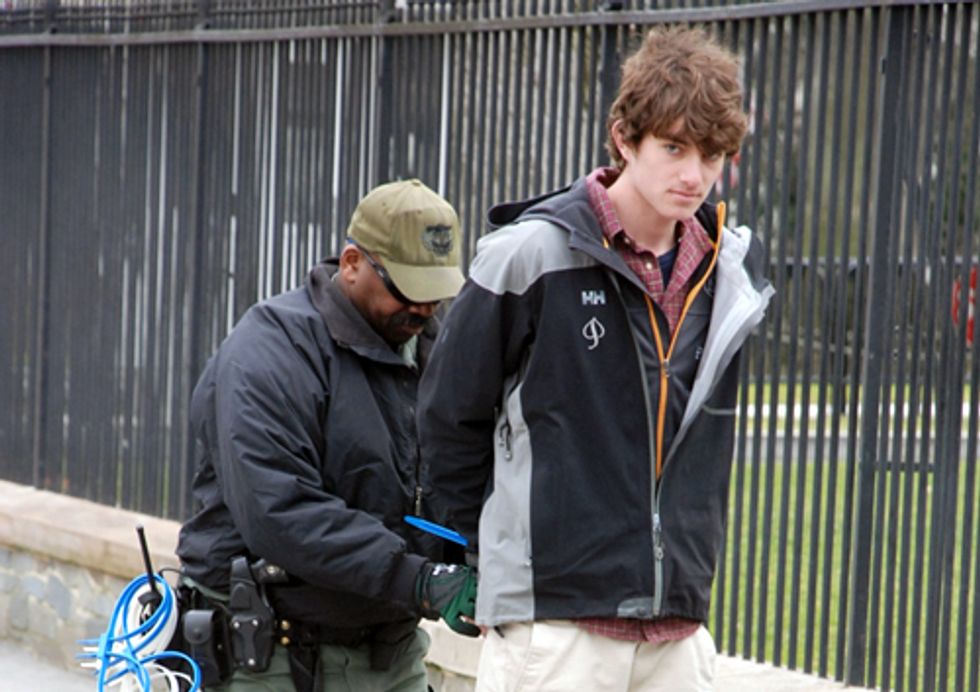 Ever since Feb. 13, when I chained myself to the White House fence with 47 other protestors urging President Obama to kill the Keystone pipeline, people have asked me why I felt strongly enough about the issue to endure arrest. Many of them have the same questions that should have been asked in the State Department's EIS. If we don't build the pipeline through the American prairie, won't the oil companies just route it through British Columbia by rail, tank trucks or pipelines and sell their oil to Asia? Won't the Keystone XL pipeline give America energy security and the U.S. jobs? Won't the pipeline lower the price of gasoline at the pump? Haven't the oil industry and government regulators given us adequate assurances that Keystone is safe? Don't the oil and pipeline companies have their own incentives to make sure the Keystone pipeline doesn't leak?

Here are the answers:

1) Is the Keystone XL Pipeline safe? Anyone who watched the oil industry and its regulators scramble to point fingers and dodge responsibility during the BP oil spill should be skeptical about industry claims of pipeline safety. Tar sands oil, sometimes known as bitumen, is extraordinarily corrosive and the industry has not figured out how to stop it from bursting even the most fortified pipelines. On March 31, an Exxon pipe carrying 95,000 barrels per day of Alberta tar sands oil from Illinois to Texas refineries burst and flooded an upscale suburb in Mayflower, Arkansas beneath an ocean of toxic heavy bitumen and lighter dilutents, added by oil companies to help the gelatinous bitumen move through the pipe. Arkansas taxpayers were shocked to learn that thanks to a loophole artfully created by the industry's political allies, they—not the oil companies—will have to pay for the cleanup.

That same week a burst Minnesota pipeline vomited 15,000 gallons of Alberta crude. In 2010, an Exxon pipeline in Michigan spewed a million gallons of dilbit into the Kalamazoo River, causing the worst and most expensive pipeline-based oil spill in U.S. history. Experts are still scratching their heads trying to figure out how to clean up the Kalamazoo spill which received little coverage from the mainstream corporate media. Clean-up crews commonly collect aquatic oil spills using floatable booms. As it turns out, tar sands oil doesn't float. Instead, it tarred and coated the Kalamazoo River bottom, which is the foundation of the aquatic ecosystem. In fact, oil and gas companies even shipping conventional oil, experience thousands of oil spills each year. In June, an Exxon pipe that runs parallel to the proposed route of the Keystone XL pipeline burst, spilling between 750 and 1,000 barrels, at a crossing on the iconic Yellowstone River and killed life in that blue ribbon trout fishery and national treasure for 25 miles.

Given the industry's abysmal record, it's safe to say that Keystone XL will experience a major spill and, due to its planned route, that spill will almost certainly contaminate the Ogallala aquifer, the sole water supply for millions of middle state Americans as well as the breadbasket of American agriculture and the ranching industries in seven states.

2) Keystone XL will not create significant American jobs. According to the State Department's study, Keystone will provide only 35 full time jobs following the construction period. We could more beneficially create permanent jobs by incentivizing solar and wind development which, even with the current anemic federal incentives, are creating each year, more new generation capacity than all the incumbents (oil, gas, coal and nuke) combined. According to the Bureau of Labor Statistics, there are already 93,000 jobs in solar and 85,000 in wind, and those numbers are growing exponentially.

3) Keystone XL will neither improve energy security nor lower gasoline prices. Virtually all of Keystone's Alberta tar sands oil is destined for Asian markets. Canadian and mostly non-U.S. owned oil services companies, the Koch Brothers, and Asian plutocrats will profit from the pipeline but there will be little value to the U.S. in terms of security or lower oil prices. In fact, U.S. oil prices will actually increase as the result of Keystone because U.S. oil prices are dictated not by world market prices but by refinery capacity in this country. Since tar sands oil destined for Asian markets will first be refined in U.S. refineries, tar sands will compete for limited refinery space and therefore drive up the price of oil. The State Department estimates that the average cost of American gasoline will actually rise upward of 7¢ per gallon if Keystone is constructed. The Pipeline will hurt the U.S. economy, not help it.

4) Why are environmentalists mad at Obama? Why have they made this the political line in the sand for his carbon legacy? Because this issue is one of the few issues that is solely under Obama's control. President Obama doesn't need to go to a Congress awash in democracy polluting oil money. He can pull the plug on Keystone XL while sitting alone in Oval Office. If we cannot win this issue with Obama, what hope do we have with other environment issues where he has to work with Senate Republicans?

5) If we don't build Keystone, the oil companies will just haul their tar sands out by rail and truck, generating more carbon and more spills. The $7 billion Keystone pipeline will transport 1.1 million barrels each day—far more than could be transported economically by rail and truck traffic. If we stop Keystone, we lock most of this carbon permanently underground.

7) We don't need oil-based fossil fuels while we ramp up renewables like Solar and Wind. Renewables are proven and market ready technologies. Their widespread deployment is only being impeded by multibillion dollar annual subsidies to oil and gas. In any case, the Keystone XL Pipeline is not a stop gap measure. Instead the pipeline will entrench our use of fossil fuels.

8) Keystone XL will have a catastrophic impact on climate change. The amount of carbon in the tar sands is equivalent to all the carbon in all the oil ever removed from Saudi Arabia. Burning the vast oceans of oil beneath Saudi Arabia has gotten us where we are today; ice caps melting, glaciers retreating on every continent, water supplies drying up, continent wide droughts disrupting agriculture and global food supplies, acidified oceans and rising sea levels, and climate chaos flooding our greatest cities. According to a new study published last week by Oil Change International, “Cooking the Books: How the State Department Analysis Ignores the True Climate Impact of the Keystone XL Pipeline," the pipeline will emit 181 methane tons of carbon every year—the equivalent of 37.7 million cars or 51 new coal plants. There are 561 tons of carbon locked in Alberta's tar sands. More than twice the amount, according to former Goddard scientist James Hansen, then have been released by all the oil and combustion in the history of mankind. We can double that sum by burning Alberta's tar sands, but what genocidal politician or oilman, would want to do that to future generations? We could better solve our energy problems by scuttling the pipeline, investing in renewables, and putting the greedy megalomaniacs from Koch oil and Exxon's puppets in the U.S. Capitol in jail, where they belong.