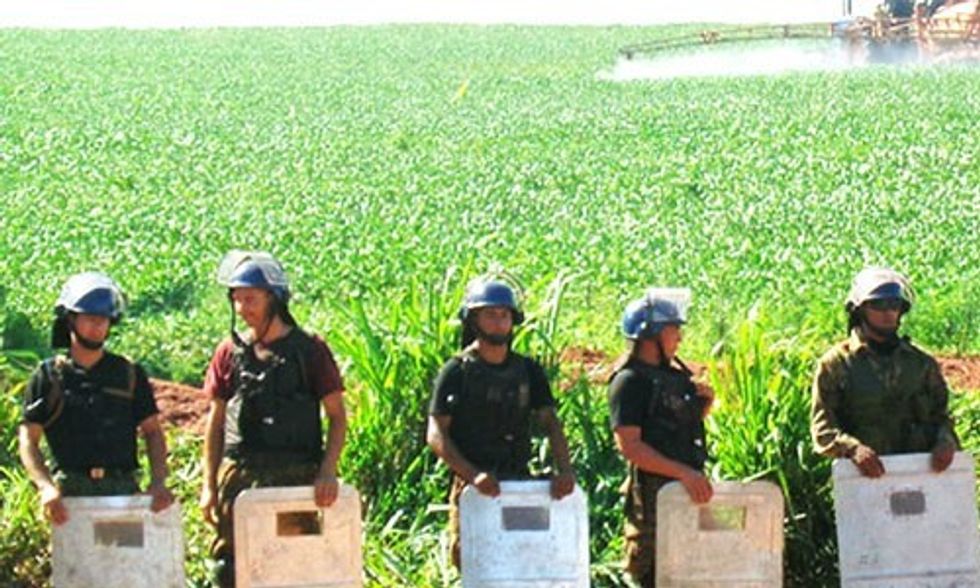 Tackling carbon emissions from agriculture from farming isn't even on the table at the UN climate talks in December. It ought to be and it's big agribusiness that's at the heart of the problem.

In 2006 a report from the UN’s Food and Agricultural Organization (FAO) threw the climate change effects of farming into the spotlight. It claimed that the meat and dairy industries are responsible for more greenhouse gases than the whole transport sector.

The majority of ensuing studies have only considered emissions released directly through farming. Yet when supporting industries such as transport, packaging and retail are included, agriculture is responsible for around half of total human-made emissions, not to mention other ecological degradation such as water scarcity and biodiversity loss. Farming itself is also a victim of climate change, as shifting temperatures adversely affect farming conditions and crop yields, particularly in the global south.

Despite the severity of the situation and although food security is stated as a core objective of the UN climate negotiations, agriculture is still off the agenda at COP21 in Paris this December. The climate talks could be a prime moment to tackle the climate impact of agriculture, but doing so requires addressing the real issues at stake and powers at play.

Industrial agriculture is at the heart of social and ecological costs of farming and integral to this are monocultures. These vast areas of production of one type of crop entail systematic deforestation and require machinery, fertilizers and pesticides which are highly reliant on fossil fuels. As more and more crops are cultivated for agrofuels, the interrelationship between big agriculture and energy firms is increasing and fields are viewed more like oil wells than as places of food production.

These harmful effects are intensified with meat and dairy production, which requires huge amounts of grain feed and bring belching cattle into the equation, which accounts for a huge chunk of direct emissions. This problem has deepened over the last fifty years with the increasing "meatification" of diets. The situation is only likely to worsen, with food production expected to double by 2050 according to the FAO, as the global population expands and meat consumption per capita rises and more people move into the middle classes.

However, this kind of prediction assumes that agriculture has simply adapted to suit demand and ignores the fact that both states and agribusiness have been key drivers of increases in meat production and industrial farming. For example, the swing towards meat and dairy consumption in the twentieth century is directly related to the search for a market for the vast grain surpluses produced by U.S. farmers. Expanding measures to open up markets to free trade and private investment, such as the G8’s recent New Alliance for Food Security and Nutrition, also illustrate how corporations, facilitated by the state, are responsible for the intensification of industrial agriculture.

The scarcity of regulations and policies to address this endemic crisis means that proposed solutions tend to ignore these structural causes and instead encourage business as usual. For example, a typical response is to make resources more efficient, such as producing more carbon-efficient fertilizer. But studies show that efficiencies gained are often countered by increases in resource use—it’s the farming equivalent of having an extra piece just because the cake is low-calorie. Other measures have included encouraging consumers to go vegan or vegetarian. But these solutions fail to challenge the logic of industrial agriculture, which operates in a paradigm of economic growth at all costs.

To tackle this urgent problem, systemic intervention is needed that can challenge the powerful players in the meat and dairy industries. To do this, transformative and dynamic food movements and networks, those that support food sovereignty and agroecology, are key. Researchers, including the Intergovernmental Panel on Climate Change, are confident that traditional or smallholder production can help to mitigate greenhouse gas emissions while increasing food security. For example, a recent report from Global Justice Now found that the Soils, Food and Healthy Communities Project, a participatory agriculture and nutrition program in northern Malawi, has succeeded in improving child health, crop diversity and food security through sustainable agriculture techniques. And mitigation practices from indigenous communities also have adaptation effects according to a group of scientists and small-scale farmers that met last year at the Lima climate talks.

Solidarity with southern movements and groups is also important because huge amounts of the food that is consumed in the global north originates in the global south and the neoliberal roots of the agricultural problem are common to both regions. But while the potential of agroecology to reduce emissions is widely acknowledged, the priorities and preferences of the corporate sector still dominate decision-making forums. Civil society organizations and indigenous groups will be present at COP21, but their voices are likely to remain systematically ignored in the negotiations in favor of business lobbyists.