Why is the Fracking Industry Worried Sick Over Promised Land? 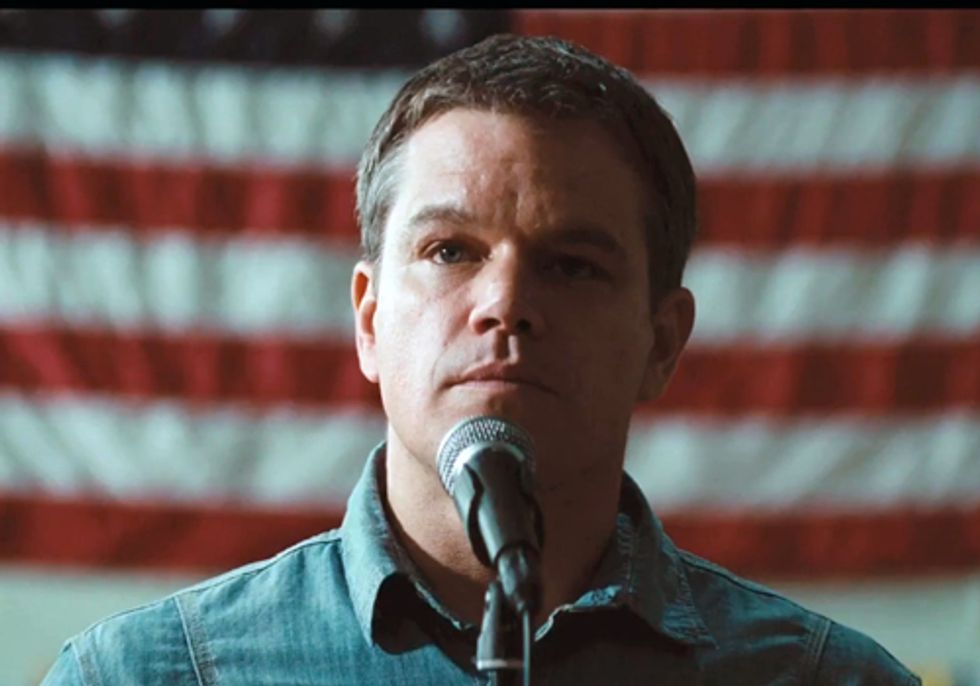 This month Focus Features releases Matt Damon’s new movie Promised Land and the oil and gas industry is worried sick about it.

Promised Land is about a Pennsylvania farm town deciding whether to go forward with shale gas drilling after a team of landmen arrives in the area.

Damon plays one of these landman, who rolls into town presenting himself as a humble flannel-wearing farmboy from Iowa. Damon’s character is an ace salesman, famously good at convincing homeowners to sign away the rights to their land. But halfway through the story, he starts having ethical pangs about his profession. Damon’s internal conflicts grow deeper as he grows closer to locals.

By Hollywood standards, it’s a small film, with a budget of $15 million. The script was written by Damon and co-star John Krasinski (best known for his role as Jim in The Office) and is based on a story by Dave Eggers.

The drilling industry is none too pleased about the movie’s at-times unflattering portrayal of landmen and it has already geared up its attack machine to aggressively respond.

The irony here, of course, is that the industry’s plan for taking on the movie runs parallel at times to the movie itself.

I will come back to this. But first, meet Mike Knapp.

You can find Knapp pretty easily on the internet. He presents himself as an average dude. On his twitter feed he talks about his favorite beers. He sends out instagram shots of snowfall on a barn and pickup truck. He bemoans the passage of time and aging when his drivers license expires. And he’s a solid citizen. “Just loaded up a car full of groceries from our small local market!” he tweeted last month.

Mike is not happy about Promised Land.

On his blog, he writes indignantly about detractors of shale gas, attacking critics of Pennsylvania drilling and laying out lengthy arguments in favor of the industry.

Of course, Knapp isn’t just another Pennsylvanian, despite his “Average Joe” presentation.

Knapp is a landman, a participant in the Marcellus shale rush. And he also works for Energy in Depth, the fracking industry’s most vocal front group. Like Damon’s landman character, Knapp doesn’t conceal his connections to the industry. But like Damon’s character, Mike Knapp tries to present himself as simply working for the best interests of his neighbors when in fact he works for the drilling industry, pure and simple.

Even though he hasn’t seen it, Mike rails online against Promised Land.

“Flaming farms? Pasture fields turning brown? Livestock becoming sick and dying? This is what we were afraid of,” wrote Knapp in a Sept. 26 blog post. “We weren't expecting a 100% accurate representation of the drilling process, but COME ON!”

DeSmog was given an exclusive chance to view the movie before its release and it is quite clear that Promised Land is not an environmental-scare flick. In fact, it’s not even anti-fracking, per se. Instead, the movie takes a close look at the economic realities that drive people to lease their land, the dying prospects for family farms and remains vague about fracking’s environmental impacts.

Although the film is far from flattering to the industry, it hardly presents the issues in black and white. Matt Damon’s depiction of a landman is humanizing. Damon's fellow leasing agent, played by Frances McDormand, is a pragmatist, a mother looking to support her family.

All this begs a simple question—Is it really the portrayal of slick landmen that scares the drilling industry or is there something else that worries them even more?

The answer to this question comes about 20 minutes into the film.

Half the town has gathered in the local gymnasium to discuss drilling and hear from the landmen about its benefits. But the high school science teacher objects.

“I would encourage all of you to go home and Google this word [fracking] and see what you find. Unfortunately, it’s not nearly as simple as what Supervisor Richards just laid out,” he says. “Now, listen, it’s true there is some money to be made having this industry coming in, but can we at least not pretend that it is not without cost?”

The town decides to hold a vote on whether or not to allow drilling to move forward, setting up the main battle of the film.

This is the part that is so frightening to oil and gas companies—the simple fact that there is a vote at all. It conjures up a possibility that the industry cannot tolerate: local control.

For most oil and gas companies, a depiction of landmen as willing to peddle in half-truths and play on locals' sense of desperation no longer represents much of a threat. The recent land rush for drilling rights in shale areas has, in many of the most promising areas, already passed. So the industry is less dependent on these salespeople than it was four or five years ago.

Local control, on the other hand, remains a very real possibility. And if local governments individually hold the reins on fracking in their area, the drilling industry will face a new battle in each town and may need to make concessions in order to win support—if it wins at all.

Lease rates may be openly discussed instead of privately negotiated. Environmental risks might be openly weighed and assessed by those who will actually bear their brunt. Potential economic benefits could be more carefully reviewed in towns and cities atop the shales.

Across the U.S., dozens of cities and towns have already passed local bans or moratoriums. And courts have so far upheld the right of many communities to control if and how fracking is conducted in their locale.

This is the true nightmare for an industry long-accustomed to getting its way with state-level legislators and regulators.

With this specter in mind, the likes of Knapp and the industry he represents are already in high gear. Their goal is to frame the film as heavy-handed and anti-fracking. Their pitch is that Hollywood elites just can’t understand average Americans.

The industry has already leaked the movie’s script online, in the hope of stealing some of its dramatic thunder by revealing plot twists. The Independent Petroleum Association of America has said it plans to set up "fact-check" websites and to distribute pro-fracking material to moviegoers and film critics.

“It’s not a Gasland thing, where you’re gonna put together a 6,000 word rebuttal. There’s no sort of rebuttal to a Hollywood fictional film—you don’t want to be silly about it,” he said, describing “hilarious” plans to arrange visits by celebrities and the entertainment press to drilling sites.

Shell plans to use the film’s publicity to bring attention to their advertisements-cum-cinema, “The Rational Middle,” their PR workers have said.

Others in the industry are looking to use Promised Land’s prominence as a way to draw viewers for their pet films: Truthland and Frack Nation. The director of one of those movies has already been writing op-eds trying to drum up attention.

Like landmen arriving in rural farmhouses with sales tags still tacked to their flannel shirts, these overblown claims and the rest of industry's spin about the movie are virtually parodies of themselves. They represent opinions from people who are paid to hold them, because they support their customer’s broader policy goals.

Despite the industry's faux-outrage and attempts to stir up hype, the Damon movie is not anti-fracking or a propaganda piece. The film offers up a clear-eyed look at economic hardships faced in many rural communities.

It also makes a simple point—with so much at stake, shouldn't communities have a candid, informed discussion about the risks and benefits of oil and gas drilling?