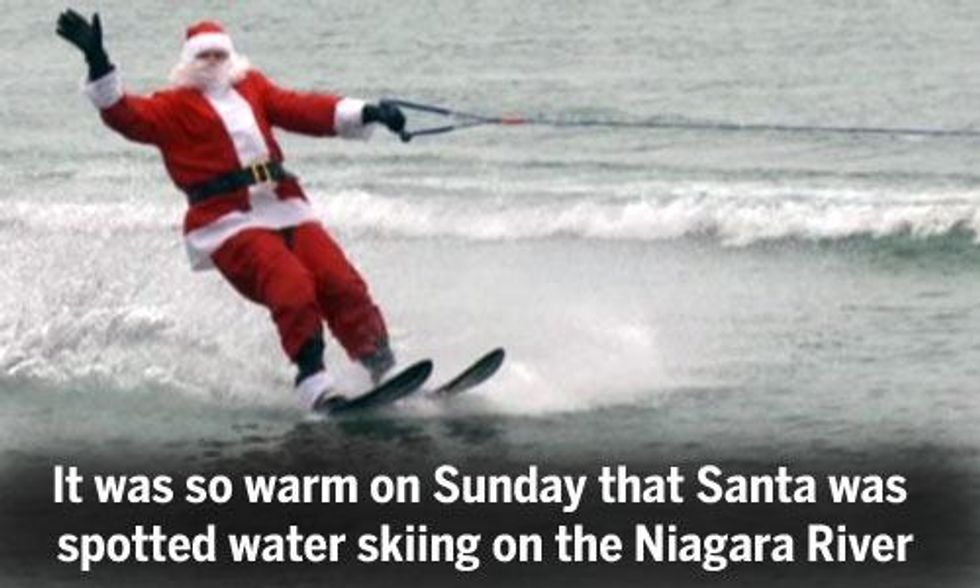 Some on Twitter are having a hard time getting into the Christmas spirit with temperatures far above normal for much of the eastern U.S.

On Sunday in New York City, temperatures topped off at 70 degrees Fahrenheit, breaking a 30-year-old record. This year's strong El Niño is expected to give much of the U.S. a warmer than average winter, while southern states are expected to get an extra dose of precipitation. But while El Niño and, of course, climate change are certainly in play in this bout of exceptionally warm weather, at least one meteorologist said there's another culprit.

The record warmth seen in the Northeast and Midwest is "really associated with the strengthened polar vortex," Mike Halpert, deputy director of the Climate Prediction Center at the National Weather Service, told CNBC.

"I would not associate the lack of snow in Buffalo with El Niño," Halpert said on Thursday. "It is much more likely the Arctic Oscillation."

Polar vortex. Arctic Oscillation. It sounds like these should be bringing colder temperatures, not warmer ones right? After all, the polar vortex is part of the reason the Eastern U.S. had such a cold winter in 2014.

The Arctic Oscillation is a "change in air pressure at the North Pole that affects how far south cold air travels from the Arctic," explained CNBC. When the Arctic Oscillation is in its positive phase, cold air remains confined to the polar region. The belt becomes weaker in its negative phase, allowing colder air to move southward. The polar vortex is a large area of low pressure and cold air surrounding both of the Earth’s poles. The weather phenomenon became well known in the winter of 2014, but it's something that has always existed.

"Many times during winter in the northern hemisphere, the polar vortex will expand, sending cold air southward with the jet stream," the National Weather Service said on its website. "This occurs fairly regularly during wintertime and is often associated with large outbreaks of Arctic air in the United States."

Right now, the Arctic Oscillation is really positive and the polar vortex is stronger than average, explained Judah Cohen, a meteorologist with Atmospheric and Environmental Research, in a recent blog post. That "has resulted in very mild temperatures across northern Europe, the Eastern United States and to a lesser degree East Asia," Cohen wrote. In short, all of that cold, Arctic air is staying up near the poles, but Cohen said the pattern is starting to change and "temperatures are likely to cool from their very elevated levels."

So currently the east coast is warmer than the west coast and Arizona is the coldest place in America. https://t.co/goYSmReq1o
— Christopher James (@Christopher James)1450023112.0

As for how the rest of the winter will shape up in the U.S., that remains to be seen. Weather patterns could certainly shift, as they always do, but there's no doubt they're becoming more extreme and harder to predict because of climate change. In a report last month, discussing one of the top three strongest El Niños on record, World Meteorological Organization (WMO) Secretary-General Michel Jarraud said, "We are in uncharted territory" because the impacts of this so-called "monster" or "Godzilla" El Niño are exacerbated by climate change.

Last month, the WMO announced what climate scientists have predicted for months: 2015 is likely to top the charts as the hottest year in modern observations with 2011-15 the hottest five-year period on record.

For now, if all you want to know is if you'll be having a white Christmas, the National Oceanic and Atmospheric Administration has figured out the statistical likelihood that your area will have snow on Christmas. Thank you, science.