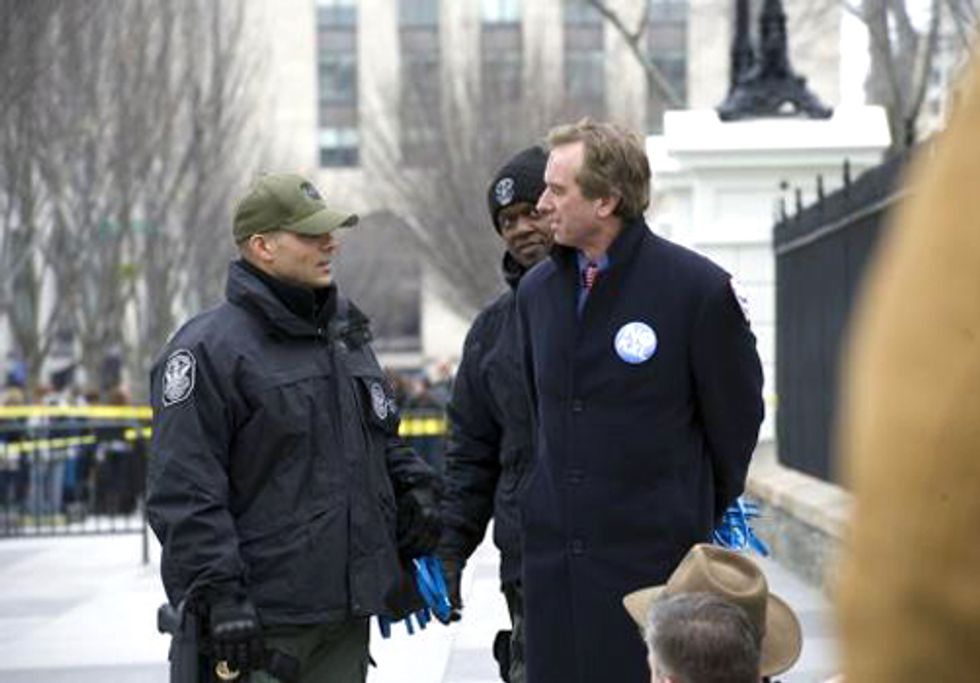 On Sunday, Natural Resources Defense Council and Waterkeeper Alliance will join 350.org, Sierra Club and many other partners in holding the Forward on Climate Rally in Washington, D.C. This will be the largest climate rally in American history, with tens of thousands of people expected. From rejecting the Keystone XL tar sands pipeline to limiting carbon pollution from our nation's dirty power plants, President Barack Obama's legacy will rest squarely on his response, resolve, and leadership in solving the climate crisis.

It is striking how tar sands and the Keystone XL pipeline have brought people together around concern for our water and climate. In Canada, communities such as the Athabasca Chipewyan First Nation and the Beaver Lake Cree are fighting to protect their health, waters and lands from the leaking dams of toxic waste and the destruction of strip-mining for tar sands. In British Columbia, more than 100 First Nations have taken a strong stand against tar sands pipelines crossing their land and waters. In Nebraska, ranchers such as Randy Thompson—who was arrested with me at a White House protest this week—are saying no to the Keystone XL tar sands pipeline. Water and climate walk hand in hand with threats as big as the dirty energy path of tar sands. A dirty energy future means trading our water for tar sands, and that is not a choice any of us want to make.

It takes two tons of tar sands—strip-mined or drilled from the forest floor—to produce a single barrel of tar sands bitumen, a low-grade, high-sulfur crude oil that must be extensively refined to be turned into fuel. Producing bitumen generates three times the carbon pollution of producing conventional North American crude oil. And the additional refining required to turn this crude into fuel only makes matters worse. Tar sands producers have already destroyed an area the size of Chicago creating an industrial wasteland of toxic sludge dams in the heart of Canada's boreal forest, one of the last truly wild places on Earth and the traditional territory of Aboriginal communities who have lived on these lands for thousands of years. If it continues, the total sacrifice area will be as large as the state of Florida.

Its proponents argue that we must build Keystone XL because the tar sands will be developed anyway. This is not true, and even industry insiders in Canada understand that the expansion of tar sands production is not inevitable and actually closely tied to whether or not the Keystone XL project is built. All currently proposed alternatives to move tar sands to a deepwater port for export face problems. Both of the proposed tar sands pipelines to the Canadian west coast are stalled. The Enbridge Northern Gateway pipeline is highly unpopular and faces legal opposition from sovereign Aboriginal communities. A senior petroleum advisor recently said: “I personally don’t think Northern Gateway will go through anytime soon or if it ever will.” If Canadians oppose tar sands pipelines running through their backyards, there is no reason Americans should take on this risk. Efforts to move tar sands to the Gulf Coast through Keystone XL and to the U.S. East Coast for export are being met by similarly strong levels of public opposition.

The oil industry claims the pipeline will create tens of thousands of jobs. It won't. The pipeline would create, roughly 6,500 construction jobs, very few of which would be local hires, according to the U.S. State Department. A Cornell University study concludes that the pipeline would actually kill more jobs than it would create, by reducing investment in the clean energy economy that already employs 2.7 million Americans. What this all comes down to is a startling willingness to take risks with our health and our children’s future in order to help the oil industry rather than the American people. In this case, we are being asked to take the risks of oil spills and climate change. More risks for fewer jobs. That doesn’t sound like a sound way forward for the American economy to me. And many in business agree—as long as they are not in the oil industry.

The pipeline would cut through the heart of the Great Plains, land of more than 250,000 ranches and farms, putting our croplands and food producers at risk of oil spills across the American heartland. The route crosses the precious Ogallala Aquifer, where millions of Americans get their drinking water. Further, Keystone XL would cross more than 1,500 waterways, from the Yellowstone River in Montana to Pine Island Bayou in Texas, threatening them with the kind of accident that dumped almost 1 million gallons of tar sands oil in Michigan's Kalamazoo River in 2010, in a spill that has been the most expensive onshore pipeline disaster in U.S. history. And we can’t rely on the safety record of a company such as TransCanada, whose first Keystone pipeline to the Midwest experienced over a dozen leaks and spills just in its first year of operation in the U.S.

The pipeline would terminate at Texas refineries and ports along the Gulf of Mexico. From there tar sands crude could be exported anywhere in the world. Indeed, that's part of the business plan for some of the companies that have promised to buy the oil, turning tar sands into diesel for export. Military experts advise that the Keystone XL pipeline would perpetuate our deadly oil dependence and will not make us more secure.

The pipeline is a conduit to the past. Rather than deepening our addiction to fossil fuels, it's time we did what presidents reaching back to Richard Nixon have called on us to do and reduce our dangerous dependence on oil.

What’s more, the president has both the authority and the responsibility to limit the amount of industrial carbon pollution emitted from power plants—which accounts for 40 percent of the nation's carbon pollution—under the Clean Air Act. Taking this action will set the right course for reducing carbon pollution domestically and send the right signals that the U.S. is ready to lead globally. NRDC has laid out a common-sense plan that will cut carbon pollution by 26 percent by 2020, provide jobs to thousands of Americans, and save families up to $700 a year in electricity bills. This low-cost, big-benefit plan tailors state-wide carbon targets to each state’s energy mix, lets power companies choose the most cost-effective means to reach the target, and drives investment in energy efficiency so consumers can light, heat, and cool their homes and run their businesses with less electricity. These standards will bring Americans as much as $60 billion in public health and environmental benefits in 2020, at a reasonable cost to the utility industry of $4 billion a year to clean up smokestacks and promote energy efficiency —about 1 percent of utility revenues. That’s a great return on investment for our future.

So join us Sunday in Washington at the Forward on Climate rally to say no to dirty fuels, no to the Keystone XL tar sands pipeline, yes to carbon limits on dirty power plants, and yes to climate leadership. We deserve better than a dirty energy boondoggle.

This article was originally posted at OnEarth. Photos: Melanie Blanding